They Come In All Varieties And Sure Are Cute...

Just When You Think You've Heard Everything...

Most people think of garden gnomes as cute little dwarf like creatures made of ceramic that are meant to adorn gardens and look either cute or "kitschy." Garden gnomes have been around for hundreds of years. It is said that they're put in the garden so that at night when no one is around, they voluntarily come to life and work in the garden. They are thought to cause flowers to bloom even more beautifully. Sometimes garden gnomes are given the nickname "protectors of the earth."

Gnomes are usually male, and most often have beards. They generally wear red hats and are known to smoke an occasional pipe. Although gnomes come in many varieties today, including chef gnomes, biker gnomes, fishing gnomes... if there is a hobby one could think of ~ there is probably a gnome out there somewhere for it.

Now I think they are very cute, and they certainly add a decorative and creative touch to one's garden. But what is UP with the working in the garden thing? And something I came across recently... there are groups out there today who call themselves "Garden Gnome Liberationists" who feel it is their duty (for lack of a better word) to "free" these garden gnomes from their life of forced labor in gardens. We are still talking about an inanimate object made of ceramic here, right?

Or am I wrong? Is there really a little tiny society of ceramic dwarfs that need to be freed from some terrible life of toiling in people's gardens? Apparently there are people out there who believe that these gnomes need to be "freed." And it is their duty to do it!

Known as liberationists, there actually is a group in France known as "Front de Liberation des Nains de Jardins," or "Le Front pour la Liberation des Nains de Jardin." They actually go "gnoming" - a word used for the prank of stealing garden gnomes, and then they "release them into the wild." Some of these gnomes are sent on trips around the world, which by the way is how the famous "roaming gnome" came to be used by the travel company "Travelocity" in their advertising.

In fact, in 2008, a French man was arrested on the suspicion that he stole as many as 170 of the little garden gnomes. He was fined for stealing them. There has been publicity surrounding this phenomenon, included the participants being featured in films and television and even in local news stories.

Now whether taking these garden gnomes for the purpose of releasing them from their life of supposed "slavery" is a real thing, or whether it is just a prank, is up to whoever you talk to. Known as "Gnoming", it is sometimes done as a prank.

But, from looking on the Internet recently, it seems that there are some groups that appear to have a delusional brand of collective thinking that what they are doing really IS a type of political cause, which is protesting the supposed "slavery" of these gnomes. Their claim is that these gnomes are taken from their "Woodland homes" and forced to tend to gardens, stripping them of their liberty. Ok, we are still talking pieces of ceramic here, right?

In Case You're Having Trouble Believing That Such Groups DO Exist...

These groups were silent for a time...

For two years, from about 1998 to 2000 these groups were relatively silent. Then during a garden show in Paris in 2000, there was a nighttime raid where 20 gnomes were "liberated." In a "truth is stranger than fiction" moment, the group "The Garden Gnome Liberation Front" claimed responsibility, and demanded that people stop ridiculing garden gnomes as cheap yard decorations. Really? At times, it feels like you are talking about a real phenomenon, then when you look at the SUBJECT of it, the absurdity of it all is realized as well!

Right before I moved to Las Vegas in June of 2011, I lived in Wisconsin. In May of 2011, there was a promotion going on to support the baseball team there, the Milwaukee Brewers. They advertised that they were going to put 1,400 "Bernie Brewer" mascot garden gnomes in areas all throughout the Milwaukee area. Fans of the Brewers were invited to try to "find" a gnome, and the intention was that each fan would find ONE gnome and they could keep it.

This was all well and good, until the GREED present in our modern society reared its ugly head, in the form of people who found out when the gnomes were to be placed around town and where the majority were to be placed. They followed the trucks that were in charge of placing the gnomes in various areas.

Most of the gnomes were put along Milwaukee's lakefront, which made sense since there is a lot of room there to hold a scavenger hunt. It was meant to be fun primarily for fans of the Milwaukee Brewers. What happened instead was a group of hoarders followed the trucks, collected the gnomes as they were placed, and filled the trunks of their cars with them!

It turned out that only a few people actually GOT the cute little garden gnomes. Very shortly after that, the gnomes appeared for SALE for PROFIT on such websites as eBay. And the really bizarre thing was, they were going for exorbitant amounts of money! Later, it was discovered that the very same garden gnomes could be purchased from the Brewers store for just $48, so the high prices became quickly deflated. There were a few people who made serious money (around $120 to $150 for each gnome), all because of a mistake made by the Brewers organization.

So much for a fun activity that was meant to be for thousands of Brewers fans. A few spoiled it, and the organization was under criticism for the way it was done. Feeling that they never should have advertised when the gnomes were going to be placed (around 3 am), thereby causing a few greedy people to monopolize finding them for themselves, along with not having anyone there to see that each person would take only ONE gnome, it was a sure recipe for the chaos that followed.

These garden gnomes were not taken to "liberate" them but rather to sell them for profit... where were the liberation groups when this happened? Oh wait, we ARE still talking about pieces of ceramic here, right?

I continue to believe that garden gnomes are a cute and kitschy way to express ones creativity and to enhance the appearance of the garden. Political railing aside, I hope that the gnomes are happy "toiling" in the garden. From the pictures I found of gnomes, most of them appear to be pretty happy fellows, that are not in any dire need of being "rescued"... but maybe that's just me!

For Some Fun And Entertaining Short Stories About Gnomes, Check This Out...

How Do You Feel About The Plight Of Garden Gnomes?

Are garden gnomes being held against their will, and do they need to be liberated? 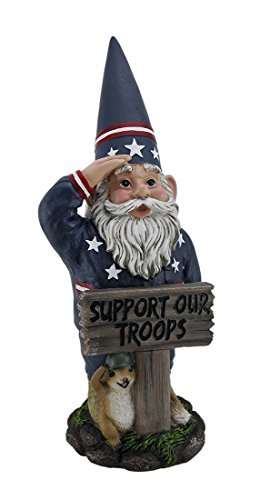