My Impression So Far

Preparing for our kitchen remodel, my husband and I were looking for some inexpensive flooring that would stand up to much abuse. We have a toddler and a Great Dane! We ruled out hardwood and I talked the husband out of engineered hardwood too. Finally, he was willing to give laminate a try when he saw how realistic it could look.

While shopping at Sam's Wholesale I looked at the flooring not expecting to see anything I wanted when I saw Golden Select Laminate Flooring and it was described as being extra thick. It also had an attached foam backing which meant we didn't have to purchase that separately. It clicked into place with no glue or nails being necessary and it was priced fantastically. At around 74 cents a square foot it was too good to be true. I rushed home and looked up the reviews on this flooring.

I found out that it seemed to have been selling at Costco in 2008 for ten dollars more per box. I wondered if the brand was discontinued? From the reviews I discovered it was imported by J. Sonic services in Canada. I called them and they said that Walnut color I liked was not discontinued. Yippee. I waited for our tax money to come in and BAM I flew to the store and bought enough boxes for our project before anyone else discovered this wonderful deal. Since this time, I see some online discussion about the product where it also mentions it being for sale at Sam's. Some people are becoming curious about it. Thank goodness I discovered it in time. But before I made the purchase, here is what I had to do:

I had my husband read the reviews and he was impressed, but skeptical (normal for him). The reviews say it's difficult to install, but worth it because it's a great floor that stands up to plenty of abuse without being damaged. Someone even said they left scraps in the rain for eight days and they swore they'd still be okay to use inside if they had to- the scrap pieces still looked great. Wowy! After reading some poor reviews of more expensive laminate made by the top dog manufacturers out there, I was ready to buy!

My husband and I went to Sam's to look at pieces in the open box. We didn't see any repeats. We clicked a few pieces together inside the store to see what a larger expanse would look like. Looked good, very realistic. Then, we bought two boxes to take home and put to the test.

Putting It to the Test

When home, we quickly assembled the floor for our test. We left it in the kitchen for three days where it would receive the most abuse. I invited our Dane to walk on it. I smashed bananas into it. I put on my spikiest heels and stomped back and forth on it. Then I dropped several items on it (can't recall exactly what). Nothing. None of this made a scratch or dent.

Then I picked up the hand held can opener and held it waist high and dropped it. Oopsey Daisey - two small dents where you could see the inside lighter color under the laminate. My husband looked at me and said, "What'd you do that for?" Well, I had to find out didn't I? We then dropped same can opener or sample of other floor we were considering that was 2.99 per sq foot. Dent. We then dropped it on our old hardwood. Dent. Then dropped it on engineered hardwood we would be tossing out. Dent. It's a long story...but we can't redo the existing hardwoods, in case you were wondering. Pee stains from past owners dog. Ugh!!!

After determining there was not a floor out there made to withstand the sharp edges of can opener, we decided to buy the floor. I'm happy to report it's held up beautifully. Not a scratch on it made by us so far. And we've been remodeling a kitchen and walking back and forth on this floor a lot with drywall dust on our shoes, sitting heavy cabinets on it, we've let in our dog, and of course our child bangs her toys on it and drops food off her high chair tray. My verdict, pretty strong stuff.

Each box is packed with seven long pieces, 3 medium ones, and 3 small ones. You are to lay the floor down starting from left to right. You leave a little space from the wall (don't worry, that will be covered by your molding and/or 3/4 round. Ideally you are supposed to trim off the lip of each piece that is next to the wall. But we are lazy and we did not do that. We just pulled out a little further from the wall and determined we'd cover it with baseboard and 3/4 round. So far it's holding up. We haven't installed baseboard yet, though.You leave space next to all walls at the beginning and endings of the rows because it expands and contracts based on the weather. Installation is tricky and I read this in the reviews. But for the price I was willing to deal with it. It's really not so bad. You have to pull off some moulding here and there 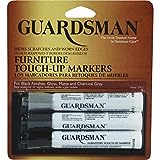 I'd say there is maybe one piece of laminate with a chipped off top layer in corner maybe every 2-3 boxes. Maybe that is why it's so inexpensive and at Sam's? For the price though, it's something I'm willing to put up with. Besides, some of the pieces are still useable if they are going to be cut of to fit flush next to a wall at the end of a row.

When I did my testing, I found I was able to patch up the floor to where one would have to be on their hands and knees to see the little damaged spot where I dropped can opener. I painted over it with Guardsman Touch-Up Pen I had on hand from Lowes or HD. I think it was Lowes. I used the Dark color.

I did notice when installing the floor the other day that I had missed a spot where there was a tiny bit of damage to a piece of wood. I'm pretty sure I installed it that way. Rather than take out 3 rows to replace that piece, I painted over it with the marker. It's on the edge of the piece though, so I'm not thrilled about the way it looks here. You can certainly tell. Luckily it's in the back of the room. I'll probably call the company that imports it and order a repiar kit. I ordered stair noses from them and T-Molding (although we've been able to install it through thresholds without using the molding. Yay! They were out of the laminate, so they sent us real wood T- Molding instead. It matches great. I may use it if we decide to carpet our bedrooms.