How to Grow Calla Lily Flowers from Seed

"Suitable for any occasion."

"The Calla Lilies are in bloom again," Katharine Hepburn softly says in the classic film Stage Door. "Such a strange flower--suitable for any occasion."

She places a sheath of white blossoms in a vase, adding, "I carried them on my wedding day, and now I place them here in memory of something that's died."

Calla lilies are strange flowers. They've been long associated with both funerals and weddings. Today, they're more popular than ever. And why not?

Calla lilies are low-maintenance. They're also vigorous bloomers. And their elegant cut flowers last for weeks in vases.

How to Grow Calla Lily Flowers from Seed 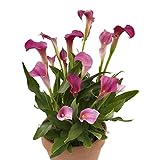 Before you sow Calla lily seeds, prepare them for planting. Place several layers of damp paper towels on a platter.

Place the platter in a dark, cool place. Mist the towels occasionally to assure that they stay damp, but don't get them dripping wet. You don't want the seeds to rot.

In a few days, the Calla lily seeds will begin to sprout. If any of the seeds don't germinate, throw them away.

Fill small pots with ordinary seed-starting medium (pictured right). Plant two seeds per pot. Don't plant them too far down! Just under the top of the soil will do, about a 1/4-inch deep. (If you live in a warm climate, you can sow calla lily seeds directly outdoors.)

Place the pots in a warm and sunny location (such as under a grow light). As with the paper towels, you'll want to keep the growing medium moist without rotting the seeds, so water from the bottom of the pot. If the soil seems too dry on top, spray it with a mister. The idea is to keep the seeds moist without getting them soggy.

Calla lily seedlings will emerge in under a week. If you sow Calla lily seeds without prepping them first, however, it may take a week or a month for them to germinate. Discard the weakest seedlings in each pot. (I know it's hard to destroy a tiny seedling, but ... if you want strong growers that will survive transplant, you just have to do it!)

As they develop, Calla lily seedlings like the same culture that their adult counterparts do: warmth, moisture (but not sogginess) and sun, so give them plenty of it.

When two or three leaves have developed on your Calla lily seedlings, it's time to transplant them.

When it's time to transplant, you have two options. Plant your Calla lily seedlings directly in a bed or grow them in a pot. They perform well either way.

Calla lilies grow best in large pots that give their rhizomes plenty of room to develop. Make sure that the pot has good drainage, and water the lily well. (Calla lilies love water!)

Use ordinary potting mix, changing it yearly to ensure that your plant gets the nutrients it needs--and that new rhizomes don't overtake over the pot.

You can also plant your Calla lily seedlings directly in the ground. Choose a sunny location, and keep the seedlings well watered until they become established plants.

If you start Calla lilies from seed, don't expect blooms the first year. For most varieties, Calla lilies grown from seed bloom the second or third year after they've been transplanted. Those who want "instant" blooms should probably plant Calla lily bulbs instead.