History of Blenders: Teenagers, Polio and Infomercials? Learn the Connection!

If you're like me, you love your blender! The latest incarnation of this popular household appliance is called the Magic Bullet, and I personally could not live without my Bullet. The Bullet allows me a one-minute breakfast that is chocked full of nutrition, and lets me make up milkshakes as an inexpensive treat for the teenagers in my home. If you love your blender, too, you may have wondered where this kitchen appliance has its origins, and what great mind invented it. Well, so did I, and I will share my discoveries with you.

What I found was that the blender has a strong connection to some significant cultural milestones. The lowly blender is connected with the development of the modern day teenager, with hospital food, the cure for polio, and with the infomercial. Who knew? Let's find out more!

The blender's predecessor, a mixing machine, was patented in 1885, and resembled today's appliance very little. It was a mixing apparatus, with blades, but was not connected to any container. Nevertheless, this was the first apparatus with a motor used for mixing food or drinks.

The next major development in the history of the blender was a patent filed by inventor, Steve Poplawski in 1922. Steve had his own electric company, and he was hired by the company, Horlick's, to find a better way to make milkshakes. Well, he did so, and continued to perfect his creation for the decade or so. His patent was for the first machine with spinning blades on the bottom of a container.And his invention was sold by Horlick's to drugstores and malt shops for making milkshakes. Before this invention, the milkshake as we know it today, was more like our eggnog. Poplawski's invention allowed for the frothy concoction we know recognize as our beloved milkshake.

The rise of the milkshake in popularity during the period from the 1930s to 1950s took place in drug stores and malt shops across America, where the famous black checked floor and funky juke box made it a very hep place to be. The increasing popularity of these shops was a part of the rise of a new subculture in North America: the teenager demographic.

Teenagers did not really exist as a demographic until the 1930s. Before then, they were either kids, and then adults that had to earn a living. The Depression of the Dirty Thirties meant it was much harder to find work, and more and more young people from 13-18 were encouraged to stay in school. These half-kids, half-adult creatures began to develop their own identify, as high schools filled up like never up before. 1

Into the forties and fifties, this demographic group began to also have some disposable income, and to spend it on music, clothes and hanging out. Were did they hang out? The bars were out, due to age, and pool halls were those of ill repute, so these folk needed a place to call their own. Thus, the drugstore counter, and the malt shops became theirs. Drinking alcohol wasn't legal, so what to drink for some wholesome fun?

The milkshake, made with milk, ice cream, flavoured syrup, and sometimes malted milk, filled the need. This hangout is immortailzed in the television show, Happy Days , in movies such as American Graffiti , and even in the comic series, Archie , where the gang love to hang out at "Pop Tate's" and eat burgers and fries, while sipping on milkshakes. 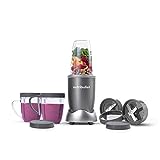 Blenders were first created to meet a need for a food with largely entertainment value, a luxury item, but another much more serious use for this product came into being with the use of blenders for patients in hospitals.

From 1939 -- 1941, medical practitioners saw that this appliance would be perfect for grinding up food for patients who could no longer chew properly, due to strokes, dental problems or other conditions. The push for a blender to use in this institutions came from the next big name in blender history: Fred Ware.

Fred Ware, for whom the Waring Blender is named, saw the blender, rightly so, as a great entrepreneurial opportunity. He was the money behind the brains of Fred Osisus, who patented a new development on the blender in 1933. A famous story says that Osisus came to Ware's dressing room and talked Ware, an American singing sensation, to invest in his blender. Ware eventually took over, kicking Osisus off the project and hiring someone else.

In 1937, Ware's company introduced the product for home use, to the Chicago Home Show, and it retailed for $29.75. He is quoted as saying that "this mixer is going to revolutionize American drinks." By 1939, he had the California medical authorities on board, and blenders were brought into hospital and embraced by private practitioners. Fred Ware had the vision, the name and the money to make blenders a household name.

Blender and the Cure for Polio

The growing use of blenders, or mixing machines, as Ware called them, in medical settings, grabbed the attention of a one Jonas Salk, who was working on a vaccine for polio in his laboratory, to mix up solutions.

This increasingly popular appliance was being developed by several different companies at once. In 1937, a business owner named W.G. Bernard added the blender to his line of kitchen products, and he called it the Vitamix Machine.

The problem was that American housewives were not yet familiar with this strange machine, so what better way to explain it to them, than by the world's first informercial, which ran for the Vitamix Machine for several years, as a thirty-minute segment, and helped to cement the mixer as a staple in American kitchens.

The blender, first seen as close to its present form in 1922, hasn't changed too much since then. Milkshakes have lost their hold as the "it drink," for teens, but we still use them for smoothies. And they are still invaluable for medical diets in nursing homes and hospitals. And yes, Vitamix still runs an informercial explaining why their machine is highly superior to other blenders on the market.

The Magic Bullet, the latest innovation in blender technology, is unique in that it offers a drink size mixing container. Popularized by late night infomercials, the product is known for allowing customized drinks for every guest. The simple design also makes it easier to clean, and offers a lid for transport.

So, that is a little bit about the history of the blender. Now, if you will excuse me, I have a smoothie to make. With my Bullet: I couldn't live without it!

1. Hine, Thomas. The Rise and Fall of the American Teenager. Harper Perennial. 2000.

The Rise and Fall of the American Teenager
Buy Now

Please Comment and Vote Up If You Liked This Hub!