There Is A Great big Hole In My Door

A few weeks ago I was moving a wardrobe from my sons bedroom into my bedroom and it slipped out of my hands and banged against my sons bedroom door leaving a small hole in the door.

Normally this wouldn't be a problem as I would get out some filler and repair the hole in seconds. Sadly I had no filler in the house at the time when it happened and my local DIY store had closed for the day.

Putting it off to the next day until I could get some filler turned out to be my biggest mistake because quite simply I forgot all about the hole until yesterday.

I thought that I would have to replace the door then I remembered a trick that I learned years ago when I was helping a friend with his decorating.

Hole in My Door

How to Fix a Big Hole in a Hollow Door

The tip that I learned from my friend all of those years ago costs no money whatsoever but it is not suitable for external doors for security reasons and weathering.

In Hollow doors fixing a small hole is simple just put filler on smooth it out and leave it to dry but when it is a big hole filler on its own would quite simply fall through to the bottom of the inside of the door and it would be cheaper just to run out and buy a new door by the time that you realised just how much filler that you were wasting.

To fix a gaping hole in a door is actually quite simple all that you need is some old newspapers, some wallpaper paste and of course some paint to paint over your repair.

You will also need some sandpaper, a wallpaper scraper and a paint brush. 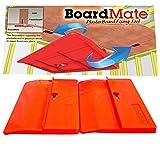 BoardMate - Drywall Fitting Tool, Supports The Board In Place While Installing
Buy Now

Filling the Hole in the Door

Plugging a Hole in a Door

Filling in the hole in the door is a lot easier than you might think.

If you know that you wont be able to afford a more permanent repair for a long time wait until the papier mache has dried then apply a coat of clear varnish for a stronger and harder finish.

Fixing A Big Hole In Drywall

The same method above can be used when patching up a large hole in drywall, it works because the newspaper dipped in paste turns into papier mache which stiffens and hardens the newspaper. The paste also has the added effect of sticking the paper to the inside back surface of the door or wall.

Papier mache is a great tempoary repair when you don't have much money to spend on a more expensive permanent repair.