Build a Pergola on Your Existing Deck

Here is a simple pergola that I constructed at my primary residence. I posted this on MySpace and got a little positive feedback so thought I would share it here was well. I built this on a deck but it could also be constructed over a patio. This an investment in time. Materials will probably cost around $500 - $600.

This particular pergola started with a deck that was in the front of this house when we bought it. I began the deck/pergola project by literally ripping the deck off the front of the house with my little Kubota tractor. When the deck didn't come apart as I thought it would, I dragged it around to the back of the house. It stayed in one piece so we decided to remount it to the back of the house and replace a window with a sliding glass door from the bedroom (another story)...

After reading about pergola's in library books, I settled on my own design using parts of styles from different books. However, being an engineer, I wanted my pergola to be able to support more than the shade....I wanted it to support a porch swing and eventually a full roof of grape vines (or Hops). Instead of giving the exact dimensions of cuts, etc (yours are going to vary with your project anyway), I thought I would share some close-up photos of the finished product. I believe it better shows the design than a schematic diagram. Please scroll through the pictures and feel free to email any questions you may have.

1) Columns: This will be the foundation of your pergola so should be stout enough to support whatever you build over it. Since I wanted to use all pressure treated lumber AND support a load over the pergola (eventually), I opted for 6x6 columns. Most pergolas would be fine using a 4x4 column. To make this structure as maintenance free as possible, I decided to notch the top of the column to allow the beams to rest on them rather than hang from a screw (which would be much faster to construct). The base of the column sits in a metal bracket (from Home Depot) that is attached to the surface of the deck. Ideally the columns would have been anchored in concrete and the deck attached to them but this pergola was an afterthought and the deck already existed.

2) Beams: Again, considering loads, I went with 2x6 beams all around. For the long span of the deck, I doubled the beams to carry the vines I hope will one-day grow over this as a "roof". 2x4's would probably be sufficient for most pergola (pergola's...pergoli?). Typically, you would use lag screws or even decking screws to attach your beams to the columns. I went with plated bolts to pin the beams in the notches on top of the columns. This should support more weight than the deck (which is sitting on 4x4's).

3) Braces: I used 2x12's for the bracing, an idea straight out of a book I got from the library. The 2x12's were cut to fit and then arched with a jigsaw. This also gives you room to walk close to a column without ducking to avoid the brace. To attached the braces to the columns, I cut a 2x6 cedar board to length and routered all edges with a cove bit. Three 3" deck screws hold the "shoe" to the brace from the back. Six 3" deck screws hold the shoe onto the columns and/or beams. The braces aren't carrying a lot of weight - they're mainly there to stabilize the assembly.

4) Finishing: Before I cut the trim pieces to length, I ran the entire 2x6 across a router to give the top edge a cove. To cover the metal brackets at the base of each column, I cut coved 2x6 cedar decking to length with a miter saw - each end has a 45° cut. Then using a nylon strap to cinch the trim tight, I finish nailed them together around the bracket.

Adding a pergola is one of the many things you can do to improve the value of your house. It costs relatively little in materials but pays back dividends if you spend your time to make it happen. It really isn't that hard to construct and you don't need a lot of wood-working tools to make it happen. This one was built using a circular saw almost exclusively. The arches were made with a jig saw and (once it melted) a reciprocating saw. Some finishing touches required a router.

And lastly, never forget the three major rules of carpentry: 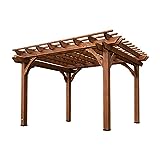