How to Remove Sticker Residue from Clothing (Simply and Easily)

Joanne Marcinek is a woman with a mission. Her passion is to help people get the relevant information they need on the Internet.

I had to research how to remove sticker residue because I had forgotten to remove the label from a new polyester sport shirt I had bought for my 16 year old son and it left a big circle of dried adhesive.

Unfortunately I didn't realize that the sticker hadn't fully washed off until I put the shirt in the dryer (which every source I've ever researched says absolutely NOT to do because it "sets" the glue even further). Oh well.

So, the shirt had been through a couple of rounds of wash with no real improvement (I had used OxiClean on the sticker residue, but it didn't really help when used on it's own.)

Vegetable Oil to the Rescue

I had read online about a few options for substances that can remove sticker residue from clothing, but the easiest and most simple seemed to be vegetable oil. So I spread some oil on the sticker residue and then rubbed it in.

Note to self: put a paper towel under shirt before putting on vegetable oil (the oil goes right through the cloth.)

Next, a little OxiClean

I plan to find out if there's a way to make this laundry miracle stuff at home, but in the meantime, OxiClean spray is FANTASTIC at getting oil stains off of clothing.

So, I figured since I had just deliberately oiled up this shirt to disolve and remove the sticker residue, I should also give it a shot or two of OxiClean to handle the excess oil.

The main active ingredient of OxiClean is Sodium Percarbonate an adduct (a product of a direct addition of two or more distinct molecules) of Sodium Carbonate and Hydrogen Peroxide.

I rubbed in the OxiClean after spraying it on. Let it sit for about 15-30 minutes and then washed the shirt with a regular load of laundry.

There's More to Life than Laundry

Finished and Clean: No Sticker Residue

Hooray, it worked! The shirt is clean and dry. No sticker residue, no vegetable oil stain, just a nice clean shirt. Now I have a secret weapon against sicker residue! 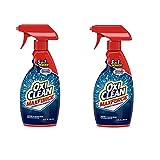