Linda's passion for gardening has encouraged her to write about growing different types of organic vegetables and flowers. I love veggies.

How to Assemble a Raised - Bed without Instructions

When we ordered a raised-bed for our garden, I was delighted because I hope it will be easier for me to plant my vegetables in it without having to be bending so much.

My husband is quite good at D.I.Y's so with that, we got his tools out like drill with bits and started to study how to put them together. We checked first that all the parts and bits and pieces were there before we started assembling or putting them together. The positive thing about the raised-bed we bought is that the wood quality seems very good and it might last a bit longer.

Tools we used for Assembling the Raised-Bed:

We had to use our initiative and observations as this is the first time we ordered a raised-bed for the garden. Looking at the photo we gathered all the wood together and then started the work.

How we assembled the Raised-Bed:

Photos of How to Put Together a Raised-Bed

Have you ever put together a raised-bed without instructions.

When assembling raised-beds use brass screws and brass brackets so that it won't get rusty because if you use ordinary screws and brackets it will rust easily according to my husband.

Once you put the raised-bed in place then spread the soil evenly inside the bed and put some compost with fertilisers like Growmore Plant Food(these are like pellets) and mix them all up. Now your raised-bed is ready for planting. It would be better if you use your own compost or mix it with any multi-purpose compost that you buy from the garden centres.

Benefits of having a raised bed

Having a raised bed for the garden has the following benefits:

Supermarket vegetable trays can be assembled for mini raised beds to use for planting herbs or salad leaves like basil, sage, celery, Pak Choi, mustards, lettuce, Chinese cabbage, chives and many more vegetables. Discarded planks of wood in the tips can be collected and made into raised beds which are really useful also for planting seeds. 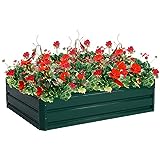 Giantex Patio Raised Garden Bed Vegetable Flower Planter Metal Plant Box Dark Green (47.5" Lx 35.5" Wx 12.0" H)
Our raised bed is more or less like this one that is selling in Amazon but ours is wooden but I think this raised bed looks like it is made with painted galvanised material or metal. Metal means it last longer than the wooden ones.
Buy Now