Gardening on the Cheap: 3 Ways to Get Lots of Plants for Super Cheap

Would you love to add a few new bushes or perennials to your garden beds, but just don't have the money to go out and buy them? Maybe you love flowering annuals but don't live having to rebuy them every year.

Plant propagation is the answer! I love to garden and am always wanting to add more plants to our landscape, but our meager one-income budget just doesn't have much wiggle room for my gardening passion. By learning a few simple and very old gardening practices, I now can add virtually any plant to my flower beds pretty much free of charge, and I am going to show you how you can do this too. It's not as hard as it sounds, really. It just takes a little know-how, pre-planning and patience. I am going to give you the know-how; but you are going to have to take care of the pre-planning and patience all on your own.

There are three basic ways to propagate plants. Those beautiful snapdragons (annual flowers) you bought earlier this spring for your planter box? You can save the seeds to start new plants next year. Are perennials (plants that come back every year) more your style? Find a relative who has some peonies ready to be divided. Pining after your neighbor's lilac or raspberry bush? Ask if you can take a few root cuttings.

The Following is a list of plants that are best propagated by seed.

Simply follow the directions on the back of the seed packets. You can even use the seeds from last years flowers. Allow some of the flower heads to go to seed. You can collect the seeds, allow them to dry out and store them in a paper bag in a cool place, or if your annuals are in a flower pot, let the seeds fall to the soil and bring the flower pot into the garage until spring. Bring the pot back outside in the spring and your flowers should bloom again. I live in zone 5, which had a very mild winter this year and was surprised to find last year's Pansies growing in their flower pot again!

Many perennials can be successfully raised from seed, but not all.

**A note on perennials**

Many perennials are not cold hardy to withstand winter weather.  These plants may be consider perennials in the warmer Zones, and annuals in colder Zones.  Pansies are a perfect example.  They are perennial, meaning the come back year to year, in many warmer climates, but in Zone 5 and above, the winters are generally too cold for them them to survive, and they are treated as annuals.  Find out your Zone and check to see if the flowers you want to plant are annuals or perennials in your area. 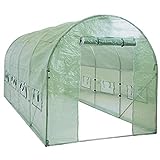 Many garden plants, houseplants, most shrubs and a few Perennials can by propagated using this method. The term, "Cutting" refers to the removal of a small portion of the leaves, stems, roots or tubers of the "mother plant" and the inducement of new root formation. The new plant will be identical to the mother plant genetically. Some plants can be rooted in water, while others need to be rooted soils, in coarse sand, in equal parts sand and peat moss or in equal parts sand and vermiculite. The addition of rooting hormone, which can usually be found for less than $5 may also need to be added.

"Propagating case" refers to what you put the plant in while the roots are forming. It should be at least 4" deep and have some sort of enclosure to keep the moisture and heat in. I save the containers that my other shrubs or flowers came in and reuse them for this. Plastic bread bags can be placed over the plant to create a mini greenhouse. Just poke a few small holes in the bag so the plant can get plenty of air. A glass jar or vase can be used for water propagation.

Rooting hormone can aid in the propagation of many plants which are otherwise hard to propagate and is relatively cheap to buy (usually under $5.00) Rooting hormone is advisable for plants such as Azalea, Blueberry, Dahlia, Holly, Magnolia, and Dogwood.

Cuttings can be dipped in fertilizer for a a few minutes juts before planting in the the rooting medium (dirt, water, sand, etc) Boxwood, Begonia, Geranium, Ivy and Euonymus all respond well to this treatment.

To check root formation, wait at least 4 weeks and then gently pull on the plant. If you feel resistance, roots have formed and you can replant the plant!

The term "softwood cutting" refers to the cutting off of small shoots from the parent plant, usually perennials. The cuttings should be taken in the spring, at the very beginning of the plant's growing season, but they can be taken anytime when young, non-flowering shoots are present. Plants should root in 3-4 weeks. Once roots have formed and are at least 1/2" long, the plant is ready to be planted.

Most shrubs can be propagated using Half-Ripened Stem Cuttings, which can be taken during the late summer months, depending on the growth of the plants. The cuttings, made 4-6" from the tip and just below a leaf node, should be taken when the new wood is just brittle enough to snap when doubled over. The leaves are removed from the lower 2"-3" of the stem and placed in the propagating medium.

Hard wood stem cuttings can be used to propagate many deciduous trees and shrubs, and should be taken after the leaves have fallen in the fall. Cuts 6-10" long, from healthy wood with at least 3-4 leaf buds from the currents season's growth should be made using a diagonal cut just below a bud. The stem cuttings should be buried in slightly moist sand, soil, peat moss or sawdust and stored for winter in a cool (40-45 degree) place. In the spring, once ground is workable, plant the stems outside, so that only the tips shows above the surface of the ground. the shoots should be well rooted by autum.

Take evergreen cuttings between October and November and plant them in propagating medium. The cuttings need high humidity and warm temperature (about 60 degrees). Aborvitaes and Retinosporas may be propagated in August and planted outside immediately.

Plants with fleshy, thick leaves such as Begonias, are good candidates for the leaf cutting method. A leaf is taken from the parent plant and the leaf stem is planted in rooting medium until roots have formed.

Roots from the parent plant is cut into 2-3" pieces and planted horizontally into rooting medium, about 1" deep. Phlox propagates so readily this way that it root cuttings can be taken anytime and planted directly into the ground.

This is probably the easiest method of propagation and is a good choice for many herbaceous perennials and even a few shrubs.

To separate clumps, the plant is lifted out of the ground and the root system divided with care.  In cases where the crowns are too tough and hard to divide, a sharp knife or spade may be used.

Some perennials need to be divided frequently to ensure continued health of the plant.  Hardy Asters and Chrysanthemums are two such plants and should be divided every 2-3 years.   Other plants should be divided as little as possible.  Peonies for example should be divided only every 7-8 years or so and can be left alone for many years without any real effect on the plants.

Plants should be divided according to the natural growth habit of the plant.

Rhizomes are underground stems which produces roots, shoots and leaves.  These can be cut away from the parent plant while in its dormant state and replanted to produce new plants.

Tubers are thick underground stems that have buds or eyes.  tubers may be cut into sections and planted or planted whole.

Bulbs and corms will propagate naturally, and a patient gardener can simply wait and divide, but there are also ways to speed up the process.

Bulbs are modified leaves and stems occurring underground.  "Mother bulbs," or fully matured bulbs, will generally produce one or more bulbs of flowering size and many small "bulbils," which over a period of years will grow to a flower producing bulb as well.  aside from natural separation, certain bulbs can be influenced to propagate faster.

Llilles: After flowering, the bulbs can be lifted and 3-4 of the outer scales removed, and replanted in the spring. They will reach flowering size in 2-4 years.

Hyacinths: bulbs can be dug up in early summer  and notched--a traverse cut is made through the base of the bulb--dusted with slaked lime and planted in a greenhouse or propagating case (they need 80 degree temperature). By autumn they can be planted outside.

Tulips: Once they have reached their maximum size, tulips split into several smaller bulbs, which can be lifted and replanted.  These new bulbs will reach maturity in 2-5 years

Narcissus and Scilla: These multiply rapidly and can simply be divided or separated as they increase.

Corms are the fleshy, round, and solid underground base of the stem.  The mother corm produces one or more flowering corms and several smaller cormels before deteriorating.  These plants can be dug up in the autumn, the flowering size bulbs separated--they can also be cut into sections--and stored for spring planting, and the cormels planted in the spring, where they will grow into flowering corms after 2-3 years.

Layering is often used to propagate plants which root easily when their branched come into contact with soil. Once roots are formed the new plant can be cut off from the mother plant. Specific methods include:

Suckers are leafy shoots produced from the underground parts of the plant. These shoots can be removed from the mother plant and replanted to make a new plant. Lilac, Plums, cherries, Poplars, and willows can be propagated this way.

In some plants, such as strawberries, stems creep along the ground, producing new plants. They can be severed from the parent plant anytime and replanted.

Other Hubs on Plant Propagation