Irvine: A Master-planned Community and a great place to live!

A move is a passing from the known to the unknown. We as a people move a lot. We move from small towns to big cities. We move from big city to big city. We move from one country to another country, oftentimes a country we know little about. We try to be as clear headed about it. We research to lessen the unknown of the unknown. More often than not, we get lucky. Sometimes, we just the make the most of it. This hub is about just that very move that was a pot of gold at the end of a rainbow.

Our search for a new home in south Orange County to live a few minutes from work ended on a bright note. Driving south from Los Angeles on the 405 in Orange County 20 plus years ago, my husband and I left the freeway and in a matter of minutes, we decided. This is the place! This is where we will live. The place is the city of Irvine.

Irvine was perfectly situated in the middle of southern California. It was an hour’s drive south from the vibrant people and entertainment of Los Angeles and 90 freeway minutes north of the city of San Diego.

The Irvine that we first saw had sprawling parks with green grass and tall eucalyptus trees, rows and rows of orange trees, clean and neat neighborhoods with the Saddleback Mountains in the distance. The rows of tall eucalyptus trees served as wind breaks to protect the crops. Most of Irvine used to be planted to lima beans, barley and orange groves.

If I gave you the impression that it was love at first sight, you are right. It was not after a few months after making the move that we realized how special Irvine is. 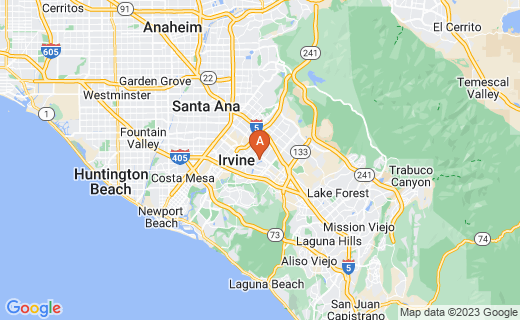 A Book on Irvine's History in Pictures

Irvine is a master-planned city that was designed to meet the needs of and provide a good quality of life to its residents. It is quite different from a city that impulsively developed to fill immediate needs. In Irvine, the distinction of a good versus a bad neighborhood does not exist. The whole city is a good neighborhood. Residential villages are connected by, in addition to roads, miles of paths for walking and bicycling amid the most beautiful landscaping of trees, flowers, and plants.

Irvine was developed by the Irvine Company who capitalized on its ownership of 93,000 acres of the The Irvine Ranch contiguous from the sands of the Pacific Ocean to the inland hills of Orange County. The Irvine Ranch included parts of Newport Beach, Laguna Beach, Tustin, Orange, Anaheim, plus unincorporated county land and small portions of Santa Ana and Costa Mesa. The original plan and guiding principles for the ranch was executed by architect and planner, William Pereira, whose work on The Irvine Ranch landed him on the cover of Time Magazine.

The development of Irvine’s 65 square miles began in the 1960s. A key component to it’s development was the establishment of the University of California in Irvine which attracted many families to locate in the area. A major part of the land remain as found more than 100 years ago. "Today, more than 50,000 acres--an area greater than half of the entire Irvine Ranch--is permanently protected for open space. A majority of these lands have been designated a Natural Landmark by both the U.S. Department of the Interior and the State of California. These lands have been preserved-and where appropriate, improved-for future generations." This quote and more information on the Irvine Ranch can be found on this website by the Irvine Company: http://www.goodplanning.org/Stewardship/default.aspx

Managed growth enabled the city leadership to provide a high level of security that earned the city the distinction of being the safest city (among cities with over 100,000 in populations, Part 1 violent crimes) in the U.S. for six consecutive years (2004-2010) by the FBI. Today, a sense of security is one of the biggest draws for families to locate in Irvine.

How the City Met Our Needs

Irvine for an Empty Nester

The years passed. Our toddler is now a college graduate. Pretty soon, my husband will retire. He would like to live nearer to the Grand Canyon in Arizona. I on the other hand began a where we will live checklist. I think Irvine will win out against the Grand Canyon.

My checklist includes the following:

1. There must be good doctors and hospitals nearby. A three minute drive will get me to Hoag Hospital Irvine and Kaiser Permanente Irvine and I can walk to my doctor’s clinic. The larger hospitals of Hoag in Newport Beach and St. Joseph's in the city of Orange are twenty minutes away.

2. Weather throughout the year must be pleasant which is assured because of climatic conditions that benefit California.

3. The neighborhood must be safe. I can assume safely that the city would like to live up to the reputation it has earned as one of the safest in the nation.

4. Church and supermarkets must be at most a five-minute drive from home which most Irvine residents enjoy now.

Irvine was a Good Place for us.

Irvine proved to be a good place for me and my family. We might even stay here until we are old and gray. .