How to Recycle Wine Boxes to Use for Water Storage

Marilyn is always looking for ways to conserve, recycle, and incorporate reusable items for survival during hard times, or emergencies.

As many people know through news reports, there is a major drought in the South West part of the United States. The State of California is in an emergency situation where water rationing will most likely be in effect by the year 2016. With this in mind, wouldn't it be a good idea to begin to store some water for emergency use now, instead of later?

A couple of years ago, as I was tossing an empty wine box into a trash bin, it dawned on me that it could be cleaned and reused, so it was determined that the next wine box would be an experiment. It took a bit of study, and a little process and time, but it worked, so I am sharing the idea with everyone. Besides, it is a great way to recycle as well, and they are easy to carry.

The bladder within the wine box is made to hold liquid, so the water will not be contaminated as long as the bladder is washed well. The water is kept from sunlight (which triggers growth of bacteria), and the shape of the boxes allows for easy stacking, or lining up. I use bottled water in some for future drinking water, and some have tap water for washing hands, dishes, or other items. Labels define the date the bladder was filled, and if it contains tap, or bottled water.

If the containers are kept in a cool, dark place they will last up to a year. After that it would be a good idea to boil water, that is considered for drinking, just to make sure there is no contamination. Water filters can be purchased that could be used instead of boiling the water.

Emergency water supply is necessary not only in the situation of draught, but also natural disasters, power outages that might also affect water pumps, or water line breakage.

First, lift the handle upward for easy unfolding after separation. Using a dull table knife, slip the edge just under the edge of the overlapped box top and lift with slight pressure to separate the folded, glued box top. It doesn't matter if it tears a little bit, as the top will be taped closed when finished for a seal to protect the bladder from too much light.

Carefully lift the cardboard away from the spigot using the edge of the table knife, while being careful not to puncture the plastic bladder, or tear the cardboard. Push the spigot portion into the box so it does not catch on the spigot opening as the bladder is removed through the top of the box.

Try not to strain the spigot or it might develop a leak. Even a slow drip can deplete valuable water supplies.

Gently pull the entire bladder out through the open box top. The bladder is made of tough plastic, but can still be punctured, so use caution as it is removed. Once outside the box, the next step is to remove the spigot without damaging the seal. I use a dull butter knife to slip into one side between the spigot and plastic. Pulling on the whole spigot while applying a little prying pressure with the butter knife usually pops the spigot out without damage.

Clean the bladder with hot water and dish soap, rinsing enough to ensure there is no more soap remaining. Once the bladder is clean, fill it 3/4 of the way full with a choice of bottled water (Sparkletts, or other large water container vendor), or tap water.

Replace the spigot the same way it came out, without using the knife. It should push into place with hand pressure. I have accomplished quite a few of these and none of the spigots have leaked so far.

It is important to remove all residue of the pre-existing wine from the bladder, otherwise the water will take on a slight aroma, but risk of a sour taste. Use dish soap and hot water and rinse thoroughly two or three times. If the bladder still smells like wine, use a little bit of white vinegar to slosh around inside for a few minutes, then wash again with dish soap.

Do not fill with water until the smell of wine is gone. Residue in the bladder can contaminate the water, and over time develop bacteria growth. When the bladder and spigot are clean, fill the bladder 3/4 of the way full of water and replace the spigot, snapping it into place securely in the opening of the bladder.

Lay the bladder down on a flat surface with the spigot facing to one side or the other. Lay the box down next to the bladder in such a way that the spigot will be on the same side as the small opening at the bottom of the box.

Tip the box upright while holding the upper portion of the bladder so the spigot slips down near the opening at the bottom, but do not let it pop through. Tape the flap closed until ready to use the water, then open as if using the wine.

Tape the top closed, leaving an opening for the handle for easy carrying. Be sure to use labeling of some kind to indicate what type of water is stored, and the date it was filled. This insures safety for later consumption.

As mentioned before, it is better to start some sort of water storage now, than to wait until it is too late, and water is not readily available. Taking measures like this will help in any kind of emergency, and makes it easy for travel too. Round containers are difficult to stack or store, but these boxes can be stacked is limited space such as motor homes, campers, or even in a trunk.

It is advisable to rotate the supply of water, keeping the water as fresh as possible. If stored for a long period of time (some of mine are 7 years old), it would be advisable to bring the water to a boil and allowed to cool before consuming, or use a water filter to make sure the water is pure enough for consumption.

Lightweight plastic water barrels are also an option, at low cost, and lightweight.

What is the best way to remove the spigot from a wine box?

What are good ways to store water for emergencies? 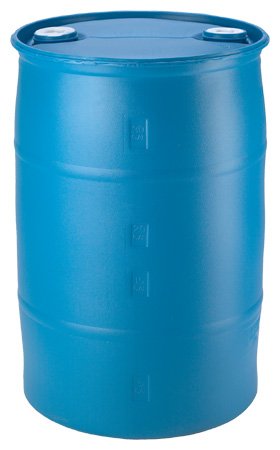 30 Gallon Plastic Water Barrel Great for Long Term Water Storage. | Blue
10/25/2021 - This is the type of water storage barrel I have. I purchased four to make sure I would have enough water for at least one month in case of any emergency. Lightweight, easy to fill. "Product prices and availability are accurate as of the date/time indicated and are subject to change. Any price and availability information displayed on [relevant Amazon Site(s), as applicable] at the time of purchase will apply to the purchase of this product."
Buy Now

There are many different types of emergency storage units small and large that can help in times of need. It is always a good idea to think ahead, prepare ahead, with essentials like food, water, personal products, and medical kits. One never knows when a storm will take out the power, flooding or earthquakes contaminate water supplies, or other situations that result in lack. Prepare ahead for at the very least a three day supply.