Native to North America this herbaceous perennial can be found in the wild in woodland areas, meadows and rocky areas. Closely related to baneberry and monkshood (both of which also grow in the same areas) there are 60 to 70 different species of Columbine that come in a wide range of colors, sizes and petal styles. Most petals are single, star-shaped with either 5 or 7 points. Some come in double-flowering varieties and others come with bonnet type flowers. All varieties have downward facing flowers or "nodding" flowers on clover-like leaves.

These easy plants do well in Zones 3 through 9 and will grow to mature height from 12 inches to 20+ inches depending on the variety. All perform their best in partial shade, but can tolerate full sun if given adequate moisture. They are not fussy about soil PH, only that it must be well-draining. Once established, Columbine can tolerate drought conditions. It blooms in late spring and early summer.

One of the best features of this perennial is that it does not require any winter protection and if left to form seeds, will readily self-sow. If planted near a different variety, they will often cross-breed and produce interesting hybrids.

To start plants from seed, the best time to sow is in the fall for the following spring/summer season. The seeds need a cold period in order to germinate properly. If you are impatient and don't want to wait that long, you can find several varieties for sale at your local nursery or garden center. These plants are already on their second year of growth and will produce blooms for you.

They aren't plagued by many pests, but do occasionally attract leaf miners, which do minimal damage.

Do you grow Columbines?

There are literally dozens of different types on the market today, it is hard to chose!

Here are some of the most popular and common: 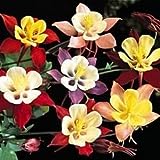 I would not recommend ingesting this plant unless certain precautions are taken: use the petals or leaves only in moderation. Do not consume the seeds or roots due to the toxic nature of these parts.

Native Americans used the flowers in a salad-type application raw with other foraged greens. The flowers are supposedly very sweet tasting.

In 1925, laws were passed in Colorado banning harvesting the plants in the wild, on public lands and without permission from property owners on private lands.

The Columbine has a Rich Mythology

When researching this plant to create this article, I had no idea of the rich and interesting mythology surrounding this plant.

In Greek and Roman culture, Columbines were the symbol of the goddess Aphrodite (Venus in Roman culture). Aphrodite was the goddess of love and fertility. It is thought the reason behind assigning this flower to her is because of the phallic-like properties of the wild flowers.

In Norse culture, Columbines were associated with the goddess Freya, who is the Norse goddess of love and fertility. One can conclude probably for the same reasons the Greeks and Romans assigned this plant to Aphrodite.

In Celtic culture, the flowers were supposed to open doorways to other worlds (probably due to the toxic effects of the seeds and roots if ingested!).

Early Christians used Columbine to symbolize and praise the Holy Spirit. The numbers 5 and 7 are strong symbolic numbers in Christianity and the petals of the 5 pointed Columbine flowers are reminiscent to 5 nesting doves. The English name Columbine means little-dove or dove-like, which reinforce this Christian symbolism.

This unique little flower is often over-looked by many, but is super easy to grow and care for. It makes a great plant for part-shade applications and come in a wide variety of colors, bringing some much needed hues to shady spots. It performs well in drought conditions once established and looks stunning in rock gardens. I highly recommend trying this plant out in your home garden.

Was this article useful?