Some Tips on Gardening in Washington (Zone 8B)

Lani has committed to the DIY process, increasing her sustainability and reducing her footprint while helping others do the same.

If sustainability is your goal, if you want more control over what goes into your body, or if you’re just curious to see if you can actually do it, gardening is for you. Of course there are so many beneficial reasons to grow your own food, it tastes better, it's cheap, and sustainable and it's just all around better for you and the earth. If you live in the southern parts of the country from the east coast to the west, it is pretty hard to fail at gardening. Give your plants sun and give them just enough water and you are likely to be successful. However, what if you live in the far north parts of the country between Washington state and New York? Well, things can become a little more challenging in these areas because there are actual winters that provide excessive rain, excessive snow and cold or all of the above. But all is not lost, homegrown food can still be accomplished in these areas. The USDA Hardiness Zone Finder website is a useful tool to gain knowledge on your climate zone and what fruits and vegetables fare best in your area. The state of Washington is a unique area with just about every type of weather condition imaginable.

First it is best if you become familiar with your climate zone before beginning a garden. You can find your zone at websites such as the USDA Hardiness Zone Finder (https://garden.org/nga/zipzone/). Where I live in the state of Washington is in zone 8b. The zones are designed to provide guidance on when to expect the first and last frost for that particular zone. There is supposed to be a 10 degree difference between zones in either direction, hotter or colder. For zone 8b which includes most of the western coast of the united states, April 4th is the date mark for the last chance of frost and November 16th is the cutoff date before frost becomes a threat.

If you live in zone 8B you can expect about 230 days of frost-free growing. Onions, potatoes, and peas can be planted in the ground as soon as it is thawed in early February. Broccoli, cauliflower, and cabbage can be planted directly in the ground around late February but it is recommended to start your seeds indoors until mid-March. Spinach and various lettuces can also follow this tactic. Tomatoes and peppers should also be started indoors around late January and remain indoors until late March-early April.

Put These in the Ground

Watermelons, gourds, beans, corn, cucumbers and squash are considered summer vegetables and should be sowed directly into the ground in early to mid-April.

Remember I’m only speaking to zone 8B, other zones will vary, sometimes drastically depending on what type of climate you are growing in. Here in Washington indoor seed sowing can begin as early as late January and includes brussel sprouts, cabbage, and collards. Those vegetables best for direct sowing include: beets, cantaloupe, carrots, okra and radishes.

Gardening in the spring and summer in zone 8B is relatively easy once pushed up against the cramped growing period of the fall. Rainfall increases drastically and temperatures, especially overnight, begin to plummet. Getting crops mature and out of the ground can become a formidable challenge. Garlic is the best candidate for fall planting doing best when placed in the ground around early October. What is nice about the fall in zone 8B is there is enough growing time for some crops to experience a second round. Cabbage, broccoli and cauliflower can be directly sowed into the ground a second time in early September. Be careful of the high heat in July and August in some states. If summers get particularly hot in your area you should begin your second round of seed starts for these veggies indoors in mid July.

September is a great month for garlic and it is also a good time for sowing peas directly in the ground, then of course there are your traditional hot-weather vegetables such as corn, pumpkins, sunflowers and beans. All the vegetables mentioned in the previous sentence can be directly sowed into the ground in early August.

This year I beefed up my indoor growing experience and created an area incorporating some hydroponic systems (which I will detail in a future article), grow lights, heating pads, and a fan. Over the past two years I have only used indoor greenhouse trays and things have gone well for me. This year I am doing more to see if I can produce more plants that are strong and resilient. I like to keep things simple and cheap. I purchase my greenhouse trays from Walmart and DIY most of the rest. Listed below is everything in my arsenal. Following the basic tips of this article along with some of your own simple research you will have few, if any, barriers to successful gardening. With that being said...get out and garden. 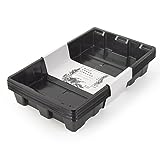 10 Seed Starting Plant Growing Trays (Without Holes) - Durable, Reusable - Grow and Start Seeds, Good for Your Greenhouse, microgreens and Hydroponics - Pack of 10 Flats + Free Plant Labels
I use these every year and they have never failed me. Great bang for the buck, reusable, reliable and inexpensive. I love these trays.
Buy Now 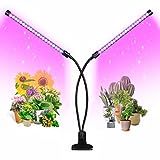 Grow Light, Ankace 5 Dimmable Levels Plant Grow Lights for Indoor Plants with Red Blue Spectrum, 3 Modes Timing Function
I have two of these lights now and I appreciate its features. Three independent lights on flexible arms increase the flexibility of the growing experience. I also appreciate the clamp, it is adjustable to a decent shelf width and clamps with ample strength and support. The lights can be adjusted to reveal several different color combinations as well as various light intensities. Finally, the lights also provide a low level of desirable heat for seed starts.
Buy Now