My Rating for the Zenith Tibet Almond Stick

I Discovered This Product in the Hardware Store

The other day I discovered the strangest product—I just have to share this with you.

It was the packaging and size that first caught my attention: it was a small red metal tube in a sea of large, plastic items on the lowest shelf at the hardware store. That alone was enough to get me to pick it up.

I read the label: Tibet Almond Stick. Hm. Okay. What did it do? What was it for?

I read the label carefully and decided to give it a try since it was under $5 anyway: it claimed to erase surface scratches on medium- to dark-colored woods almost like magic.

Having recently moved, I’ve got plenty of those little scratches that need attention.

So I Bought This Little Tibet Almond Stick at the Hardware Store...

So, I bought this Tibet Almond Stick thing, small enough to fit in my purse easily, and when I got home I opened it and was immediately struck by a strange, woodsy-pine, pleasant smell.

The stick came wrapped in a waxy paper, which I removed carefully and found another layer of packaging that apparently held the almond stick together, so I left it on.

The stick itself is about the size of a piece of the big fat sidewalk chalk that kids use.

I read the instructions again on how to use it.

Sounded easy enough: just rub a little over a surface scratch (it won’t fix gauges that penetrate the veneer on a covered surface), perhaps rub it a little more with your finger, and let it sit.

So, I went around the house and found that this little, under $5, strangely wonderful-smelling stick worked great on some woods and apparently not at all on others.

Where to Find the Zenith Tibet Almond Stick 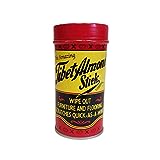 It Rejuvenated My Antique Mahogany Piano

Of course, the doors, baseboards, and other woodwork in my new house are white, so I didn’t try the Tibet stick on any of that. However, it rejuvenated my mahogany (dark) grand piano where little scratches had appeared.

It also worked wonders on several other pieces of furniture that picked up some scratches along the way.

It works especially well on antique furniture, which the instructions mentioned.

A Scratch in Walnut: Before and After Treatment with the Tibet Almond Stick The Effects Seem to Improve Over Time

I discovered something the instructions didn’t talk about, too: the effects get better and better for several days.

For example, the pieces of furniture that I initially thought that it hadn’t worked on, it did a pretty good job of covering those.

From now on, I’m going to put a healthy coat of this stuff on the scratches, then go back through a few days later with a dry cloth towel and rub the clear, slightly oily substance into the overall piece of furniture so there doesn’t appear to be a “wet” spot where I repaired the scratch and for several inches around it. No polka dot furniture for me!

Another Scratch in Walnut: Before and After Treatment with the Tibet Almond Stick Summary: 5/5 Stars from Me for the Tibet Almond Stick

There are a hundred ways of covering and removing scratches from things, but this is quick, easy, and not dirty—no need to try to scrub stain off your index finger any more. It even smells wonderful (sort of like pine-trees, and yet not).

It goes on clear, quickly and easily, there’s no drying time, and the results are usually immediate (I personally think they actually get better over a few days, but that’s not what the company says).

I still need my little pot of stain and scratch remover for filling and covering the really deep scratches and gauges, such as those caused by my dog, but this is super to keep handy for the little annoying scratches that happen.

The Tibet Almond Stick is perfect for storing in the junk drawer to fix life's littlest “oops”es and to touch up the coffee table before company comes.

More About Wood Refinishing and Cleaning

Have you ever tried the Tibet Almond Stick?

If you answered "Yes" above, did you notice continued improvement over the first 2-3 days on the treated areas?