Himalayan crystal salt lamps are carved from natural Himalayan salt crystals, which are prized for their purity and clarity. Salt lamps can use either candles or electric bulbs. Regardless of which kind you buy, Himalayan salt lamps, which actually originate in the Himalayan foothills of Pakistan, cast a beautiful, warm glow that is perfect for ambient lighting, a romantic dinner for two, or even to use as a night-light.

There are also many claims of health benefits from Himalayan crystal salt lamps. Salt lamps are said to be ionizers: objects that release negative ions, which are believed to purify air and promote good health.

Natural salt lamps are said to: 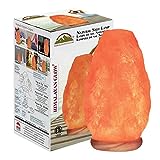 Water and Salt, The Essence of Life
Buy Now

Many of these claims were popularized in a book called Water and Salt, by Barbara Hendel. But are they true?

Negative ions (also known as anions) are created when an atom gains one or more extra electrons. This is a normal process, and negative ions are common in natural settings. Some studies have shown that artificially increasing exposure to negative ions, with use of an air ionizer or similar product, can improve feelings of general well-being and reduce symptoms of depression and SAD.

However, other studies have been inconclusive, and there is no scientific consensus about the health benefits of negative ions.

Even if the benefits of negative ions are real, however, there is grave doubt whether Himalayan salt crystal lamps can actually emit significant levels of negative ions. The bonds between sodium and chloride ions - the two primary elements in salt crystals - are extremely strong and scientists question whether the energy in a lamp would be sufficient to break the bonds and emit significant levels of ions.

Himalayan crystal salt lamps can be a beautiful addition to your home but it's wise to be sceptical of the claims about health benefits. If you like the look of the lamps, buy one; if you are solely interested in the health benefits, it's probably better to look for other ways of improving indoor air quality and liveability, such as houseplants.

If you do experience health benefits from your Himalayan salt lamps, please stop by and let me know! I'm curious to hear your story.