My Review Of The Utilitech 7.5 Watt LED Bulb From Lowe's Home Improvement

My Rating Of The Utilitech 7.5 Watt LED Bulb

LEDs Are Growing Up!

This is my review of the Utilitech 7.5 watt Soft White LED available at Lowe's Home Improvement. It is also available from Amazon as a product made by Feit Electric however the specifications are the same between the two brands. This is an LED bulb similar in shape to a standard incandescent, and according to the manufacturer, is equivalent to a 40 watt light bulb in terms of light quantity. However, many reviewers including myself compare this favorably with a 60 watt incandescent (or a 13 or 15 watt CFL) as they appear every bit just as bright. And it's a great indicator that LEDs are finally maturing to the point that they're a viable option for most consumers.

It is puzzling that the manufacturer would compare it to a 40 watt bulb when most people would agree that it is as bright as a 60 watt incandescent or equivalent. However, LEDs by nature are directional and don't spread light as well as an incandescent or CFL. I must assume that the manufacturer decided to play it safe and not place too much hype on such a good product. All in all, the bulb does spread light reasonably better as compared to early LED bulbs that were much more expensive. This bulb does however distribute its light very well.

At the time of this writing (January 2012), Lowe's currently has 129 reviews for this 7.5 watt LED with an average rating of 4 out of 5 stars. This is pretty good for such a novel product on the market. Of course, there are some negative reviews claiming early failure within a year, but if you purchase it locally, save your receipt and packaging just as you would (or should) with any product. As I stated earlier, most reviewers compare it to a 60 watt bulb in terms of the light output.

Utilitech LED Compared To A CFL

Visual Comparison To A CFL

I decided to compare the 7.5 watt LED bulb to a 13 watt Soft White CFL made by Sylvania. Both are rated with a color temperature output of 3000K, which basically means Soft White to those of us, including myself, who aren't lighting specialists. The Utilitech LED is slightly shorter yet a little wider than the Sylvania CFL. The side of the bulb is also composed of a heatsink, which is used to dissipate excess heat generated by the LEDs and associated electronics. It is also a little heavier than the CFL, yet this isn't a big deal.

In the images to the right, I used the same digital still camera with the flash turned off with each take, taken with each bulb in the same lamp and to the best of my ability, from the same position. I took these images to show the similarities and differences between the light emitted by the LED and the CFL. Please note that on camera, the color of the light from both bulbs appears as more of a Cool White (meaning it has more of a blueish hue), rather than the stated Soft White. I assure you that they both appear more yellow than the images show.

As you can see, the CFL in the bottom picture emits light in a very even fashion all around the bulb. The LED in the top picture, distributes more light in the area above the bulb towards the ceiling. Below the bulbs, the CFL has emitted its light more evenly as compared to the LED. However, this LED does a much better job than LEDs of the past which would have projected all of their light in a sharp beam directly from the end of the bulb. To me, the difference is noticeable but is not a significant problem. I still find it to be a perfect option for providing a soft warm light to my room. This may be an issue for some applications but you just don't know until you try. 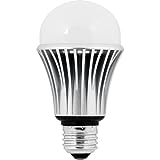 Is The Utilitech 7.5 watt LED A Good Buy?

In summary, individual consumers must determine whether or not LED light bulbs such as the Utilitech 7.5 watt Soft White LED are worth their higher initial cost for the benefits such as lower energy consumption, lack of mercury, and very long lifetimes. The best way to determine if it might be a good product for your needs is to simply purchase one and try it out and if you're unsatisfied, return it. Lowe's frequently offers this bulb on sale for $11.98 rather than the typical $19.99 they charge. Check it out and you might not be disappointed. Myself, I must say that this LED is a good replacement for CFLs and Incandescents in my home.

Looking For Other LED Bulb Reviews?

If you're still searching for the perfect LED bulb, I have written a review of another LED bulb: