Your weed-eater won't start and the yard is beginning to look like a jungle. This can be frustrating, I know. But there is hope. You can fix the weed eater, and with a minimal amount of effort, and some tools, you'll be whacking away in no time.

electric weed eaters and there are

Another thing is old gas left in the carburetor has a way of turning into a jelly like substance before dehydrating and becoming a lacquer. The flow of fuel is blocked and your weed eater won't start.

But first let's go through the process of elimination to make certain that something else isn't causing the problem before digging into the carburetor.

A lot of people laugh when I say, "Check for fuel in the tank". But it really happens more often than you may think. Also, if the weed eater hasn't run for several months, when you do put fuel into it, it takes a few pulls before the fuel is going to work its way through the hose, into and through the carburetor, to the firing chamber. The primer bulb helps a lot with this process, but it will be a couple more pulls than if it had been running recently.

How did the process of elimination go? If you have eliminated the possible causes listed above (except for the piston rings that are rare, but a Poulan issue) there's one more item you should check before going any further. This item has failed two times in one season on me because of the material it's made of, rubber. It's the boot connecting the air filter intake to the engine intake. The boot is red and it's fairly easy to see just by looking down into the engine from above. The rubber breaks down quickly due to the heat it endures at it's location against the engine. The next thing you know there's a hairline crack and you're weed eater is sucking air and it doesn't work anymore.

The boot can be picked up at most hardware stores or online.

To install it just loosen the carb mounting bolts until it can be slipped into position and then re- tighten the bolts.

If the boot is fine, and the process of elimination was fine, then it's onto the carburetor.

These weed eater carburetor's are very reasonable to purchase new. They run $31.66 for a new carburetor (as of the date this is written 2013). Amazon.com has them even cheaper, $23! So, if you just want to get this thing running again, no hassle, then by all means purchase a new carburetor that you just screw on.

Replaceing the carburetor entails removing the fuel lines and they are delicate, so you may want to replace them at the same time. 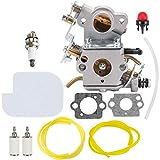 If you like a bit of a challenge, pick up a set of gaskets for your weed eater type (or take the carburetor itself to your local hardware store). The gasket sets will run you about $5.07. You might want to replace the fuel lines while you're at it. The fuel lines may be different sizes ie: diameter. Take a piece of each hose with you to make certain you get the correct diameter fuel line. Most hardware stores normally carry the gaskets needed and the fuel lines for sure. Pick up a can of carb cleaner while you're there.