I am married to a very private man, who has a huge passion for orchids, akin to Nero Wolfe - Rex Stout's fictitious detective. Because you will not be invited to the house for a tour of his orchid gardens, I am bringing them to you - right in the privacy and comfort of your own home!

Now, if you want me to be able to continue to do this, you cannot tell him! He'll be convinced that his privacy has been thrown to the wind, and our home needs revolving doors installed, and we'll have to hire a tour guide or move out of the country, have plastic surgery done on both of our faces, and change our names...so....if you like them, tell me. I'll break it to him gently...the man ought to know, that we think his orchids are spectacular!

Here are some of the tiny, miniature orchids that he grows. I am partial to calling them "orchid babies", because that's what they look like to me!

Baby Angel Orchids - the only survivors...

There's quite a story here, about this new batch of Baby Angel Orchids. They are here, with the Baby Orchids, instead of being included with some of our other orchids, because they need some extra TLC. There were actually more of these "born", but Archimedes, our pet Muscovy Duck, decided she would get involved.

Yes - I know - "Archimedes" is a male name, and she is a female duck - but I didn't know what she was, when I named her!

At any rate, when the other batch of Baby Angel Orchids bloomed, which were identical twins to these, Archimedes mistakenly thought they looked just like her duck food. So,...she ate them! She got herself a good scolding, too, and had to go to Muscovy Duck Court over the whole affair - jury trial and everything. We couldn't even subpoena any witnesses, because she was all alone at the time.

Well, the upshot of the trial was - she got off. The verdict was - innocent, believe it or not. She ate it - we know it - but she entered a plea of "not guilty".

Her defense, run by the Muscovy Duck Advocate, was that - it was dark,; she doesn't see well in the dark. She tried to enter a plea of "not guilty by reason of insanity", but we all laughed at her so hard, that she squashed that notion!

I still think she should have done 30 days, because she has a terrific sense of smell, and she could smell that those little infant orchids were not duck food!

So, there were a lot more of these darlings; these are the sole survivors. If they were paying attention, they might have saved the ones Archimedes ate - don't you see their little "eyes"? Needless to say, we immediately got Archimedes a pair of "duck spectacles", so the lame excuse about them looking like her duck food - just won't float anymore!

Now, admit it - aren't they adorable?

One of the delicate darlin's!

This orchid is a full-grown orchid - I just call them ""babies", because they are so small. Despite the fact that my taste generally does not gravitate towards pastel colors, I just love this little sweetie!

Doesn't this orchid look like a baby to you? No? Well - I think it does!

My fingers are holding it, and I'm not very big, so you can easily get the idea of how small this miniature orchid is...and the plant had lots of blooms on it, too. Notice how the dusty salmon petals dissolve into an icy pink, and then gradually become white, towards the center.The baby's face is just about "cream-colored", enhancing the "baby" image it imprints into my mind, and check out the uplifted "arms"! This little baby orchid is just begging to be held...

Little Baby Orchids, all in a row...

Some of the new arrivals...aren't they sweet?

They look like the Orchid Stork just swooped these babies up, all in a row, fastened them to a long stick, and delivered them to their new parents - us!

When I look at this, it reminds me of an array of old-fashioned baby bassinets, with each little bassinet curved all around to protect the orchid infants. Just look at how they are arranged, and inside each bloom, nestled safe and sound - it seems a tiny baby orchid sleeps! These miniature orchids are so small, that I could hold the entire spray of them in the palm of my hand, close my hand, and you wouldn't even suspect that they were there.

Doesn't this little darlin' look like he was just "unwrapped"? Such long, thin delicate petals - perfectly designed to protect a tiny baby orchid.

You can see how small it is - that's my hand, and as I stated above - I'm rather small.

This one could also have qualified as one of our Alien Orchids - don't you think? Just expand your imagination - can't you see that he looks like a One-Eyed, One-Horned, Flying Purple People Eater?

Just look at those TEETH!

When I first saw her bloom - oh, she's a girl, all right; she's pink - I was viewing her from a distance. She just looked like a lovely deep pink orchid. When I zoomed in on her with my camera, I was startled! An entirely differently mental scenario unfolded in my mind.

For the life of me, this baby orchid looks like she should be in a horror film - time lapse photography that documented her blooming would be a great way to startle an audience! 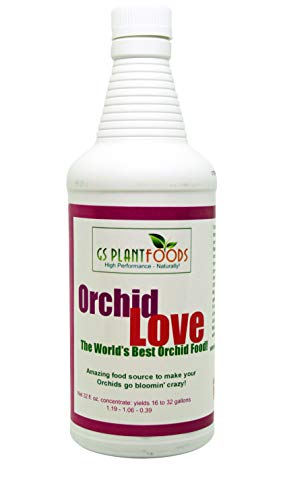 Feeding orchids is quite easy, if you know what to use. That little one of ours above, is probably in need of a dose of this, right now!

This is one of the best "Orchid Foods" available, and it is so concentrated, that one quart will give you 16 to 32 gallons of orchid food, depending on how you dilute it.

You may not like the smell of it, but your orchids will! By and large, "Orchid Love" gets rave reviews from those who use it.

It is really hard to see this little Japanese Wind Orchid, also known as the Japanese Warrior Orchid, as it is so very tiny. Look at the center of it, and you can see what it really looks like. If you are near this orchid when it blooms, you will know it, as it simply exudes a very pungent, perfumy, "jasmine-like" fragrance.

You Can Grow a Japanese Wind Orchid

We have lots of these growing at our home, although my husband is not a Samurai warrior.

As tiny as they are, their aroma can fill a room!

About Our Little Orchids in the Photo Above

The miniature orchids on the left hand of the photo, made me think of little babies, hanging in their sleepers on a clothesline. They were just darling, and we had lots of them. I could just picture Mama Orchid giving all of her baby orchids a bath, and then hanging them up to dry. Do you see it?

Our little white, green, and burgundy orchid is elegant, albeit very small. The color contrast on this little guy is just striking, to say the least.

The white and lilac colored baby orchids on the right remind me of our Flying Nun Orchid, that we talk about elsewhere. They all look like they are coming from the sky, don't they? Can you see their "wings"?

This Tiny One Looks Like a Rabbit to Me!

When I saw this little fellow bloom, all I could think of, was how much he resembled a bespeckled rabbit with a huge nose! Well, he does, doesn't he?

Granted, I have never seen a lime green and yellow and pink rabbit before, but that is the image that popped into my brain. He is very small, so he's evidently a miniature rabbit orchid, but he preferred to stay on his stem, instead of hopping away.

Our Baby Orchid with a Bib!

Oh, it is quite easy to see that this is one of our baby orchids - she is wearing a bib! Can you see it?

I wish we had thought about putting one on our "Spitting Orchid", a Catasetum that we have spoken about before. That one, makes a sticky mess all over its surroundings, when it spits. Well, we didn't think of it, so we just had to clean up after it.

Not only does this baby orchid sport a bib, she also is holding her arms out, so we'll pick her up and cuddle her. Isn't she darling?

P.S. She is a blonde, too. We don't get many blond baby orchids!

A Book on My Favorite Miniatures - Bulbophyllums!

Another of Amazon's treasures, on Bulbophyllums, which have lots of miniature orchids in their genus. Sure to please, and look at the title! I knew they were in cahoots with other orchids. You see why THAT caught my eye? This book talks about their allies!

You can read what the Alien Orchids did to me, here:

Bulbophyllums and Their Allies: A Grower's Guide

This book is basically about bulbophyllums, one of my favorites. Many of them, are miniatures orchids, and look like little "aliens" to me.

This type, my husband finds easy to grow, and this book highlights a lot of the different varieties.

Tell Us What You Think, Below...

Since my husband grows just about every orchid he can, and they vary so, I'd like to get your opinion on which ones of his Baby Orchids you like the best! He won't mind rave reviews - despite his "recluse mentality" about tours! So, tell me - which ones are you partial to?

All About Miniature Orchids on Amazon

This book will be indispensable, if you would like to learn how to grow your own miniature orchids.

If you like our "Wee Baby Orchids", you will really enjoy this book, as the author goes into detail about 300 different types.

Photo credits: All of the orchid images portrayed here were photographed by the author, E. Tack.

Like our Miniature Orchids? - Everyone loves babies, don't they?