The following review is aimed to help you in finding the best electric snow blower. To do that, first, the features you should be looking for in a decent electric snow blower have been discussed. Then, the best selling electric snow throwers have been listed with candid reviews on the pros and cons of each product. Having read through this page, you will have the information you need to choose the snow blower that will best serve you in clearing your place from snow.

How to Choose the Best Snow Thrower

There are a number of factors you have to keep in mind when looking for the right electric snow blower.

Effective Snow Depth: This is the decisive feature for any snow blower. 10-inches is a decent snow clearing depth for an electric device. As expected, all brands claim their snow throwers can handle 10-inch snow. Not all products will live up to this claim though, and customer reviews are the only source to verify a snow blower's strength.

Snow Throwing Distance: You want your machine to throw the snow to a good distance so snow piles don't get in your way. A 20-foot throw distance is decent for an electric thrower. Again, official company claims are promising but user reviews must be checked to reveal the actual distance.

Weight: While a light snow blower would be easier to push around, heavy has its advantages. A heavy snow blower will dig into snow better and is less likely to leave behind a layer of snow that has not been thrown away.

Durability and Design: The snow blower must be well-built and free of any serious design flaws. Consistent customer complaints about parts of the product breaking falling apart are alarming.

Now that I have shared the tip, we can proceed to the snow blower reviews.

Snow Joe claims that its electric snow blowers can take on snow as deep as 10'' and throw it to a distance of 20 feet but real life experience does not fully support these claims. While many people actually end up quite satisfied with Snow Joe's performance, it is the users' consensus that the snow blowers of this brand are only effective on fluffy snow no deeper than 5 inches and can throw it no further than 10 feet. What I find alarming is that some customers say they would rather shovel up the snow than using this snow blower to clean their driveway or sidewalk. I've even come across a few complaints about Snow Joe failing on wet snow under 5 inches.

As for durability, Snow Joe has a flaw. People who own Snow Joe electric snow blowers consistently complain about the drive belt, which slips or is torn apart rather quickly. There is apparently some problem with the pulley wheel design and the flawed drive belt is reportedly not covered by the warranty. Some people claim to have solved the issue by purchasing a cheap replacement belt but the question remains whether you want to deal with a manufacturing flaw after purchasing a machine that costs more than $200.

In short, what we have here is a snow thrower that will do the job if you are not living in a place where it snows a lot. It is a fact that Snow Joe is a decent manufacturer but you should check the other brands before you take this one. If you wish to go for Snow Joe, I definitely advise you to get the headlight model because it costs only a few bucks more and the headlight is nice addition. 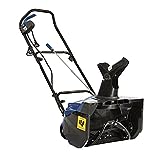 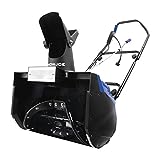 WORX company is known for its high-quality lawn mowers and other tools. The WG650 electric snow blower is a bit more powerful than Snow Joe but there are some issues with this thrower that should be taken into consideration before making a purchase.

The product specs published on product webpage state it works on snow as deep as 10' and throw it to a distance of 30 feet. Customer reviews suggest it may not so powerful. WORX WG650 definitely works when the snow is less than 5 inches but it starts to suffer on more than 6-inch snow. I've seen a few who say it works in 8-inch snow and there is almost nobody to claim it can handle 10-inch snow. Even those who are satisfied with the performance of WORX admit it is effective only on shallow snow. As for the throw distance, it is somewhere between 15 feet and 20 feet but certainly not 30 feet. Those who have had the chance to compare this on to a Toro, tell that Toro is better.

WORX electric snow blower does not seem to have a strong build. There are dozens of complaints about snow thrower falling apart after a while. The most problematic part is without doubt the chute. Some say it is badly designed while others suggest the manual is misleading on how to assemble it. Whatever the case, there is obviously a problem with the chute because there are just too many stories about the WORX snow blower's chute breaking off during use.

In general, WORX WG650 may be a better option than Snow Joe but it still has its weaknesses. GreenWorks and Toro snow blowers reviewed below may offer better alternatives.

GreenWorks is a Chinese company that focuses on building electric outdoor tools. They come up with high-quality products at competitive prices. Some of their electric stuff are rated really well including this one. Indeed, GreenWorks 26032 is the most popular snow blower and there are good reasons for that.

Firstly and most importantly. GreenWorks snow thrower stands out from the electric snow blowers we've seen so far with its superior performance. Unlike the other snow throwers, the power of GreenWorks 26032 lives up to what company advertises. There is only a handful of reports about GreenWorks failing to do a snow throwing job while hundreds of users verify that it is able to handle snow up to 10 inches. As for the snow throwing distance, it turns out to be better than what the company claims. Product specs say the snow blower throws snow up to 20 feet away but several customers testify that their GreenWorks 26032 snow thrower can discharge snow up to 30 feet away or so. This is astonishing power for a very competitive price!

Next, despite the wallet-friendly pricing, GreenWorks Snow Thrower has a high-quality build. It has more metal in its build than Toro does and this is reflected in its 32 lbs weight. I have not come across many reports where the GreenWorks snow thrower broke and it has a four year warranty, too. It is also designed in such a way as to take full advantage of plastic and steel by using each material in different places. For instance, the snow blades are made of steel for durability but they are coated in rubber to protect against ice build-up. The handle is also metal but it is plastic covered where your hands actually touch it. That makes it much more comfortable for your hands. People like the handle and say it is well-designed making it easier to drive the machine.

Finally, GreenWorks Snow Thrower has a built-in circuit breaker that offers some protection against short circuits and overloads.

Comparing GreenWorks with Toro, the latter is generally accepted to be the best snow blower supplier. Yet, GreenWorks has a tremendous price advantage and some users who have tried both actually suggest that GreenWorks may be superior to Toro. Indeed, there is good reason to prefer GreenWorks over the 12 Amp Toro snow blower while the 15 Amp model of Toro retains its status as the most powerful electric snow remover.

In conclusion, obviously GreenWorks people have put more time and effort into designing an efficient snow blower than other brands did. This snow thrower offers the best price to performance ratio and given its features and performance, I am not at all surprised that GreenWorks 26032 has become the top selling electric snow blower and I recommend it as a great buy.

Toro is another well-known supplier of outdoor tools and their electric snow blowers are generally accepted to be the best.

There are two snow blowers form Toro. Toro Power Curve 1500 comes with 15-inch cutting width and 12-Amp power and Toro Power Curve 1800 with 18-inch width and 15-Amp power. Personally, I do not think the smaller model is the best choice. There is nothing to make me believe it is any better than Greenworks snow thrower. Actually, it is apparent that Greenworks is cheaper, stronger and bigger. However, things are different when we look at the 15-Amp Toro snow blower. It is the prevalent view of customers that 15-Amp Power Curve 1800 model is the most powerful electric snow thrower on the market.

According to Toro, the 15-Amp snow blower can throw 12-inch snow to a 30-foot distance. Customer reviews reveal that the 15-Amp Toro Snow Blower can easily clean snow up to 10-inches deep. There are few users who report they used it on 12-inch snow and it handled the job. It starts to have a difficult time if the snow is taller than that but you can still clean deeper snow by making several passes. The 30-foot snow throwing distance is reported to be correct, too.

Weighing only 24 lbs, Toro Power Curve 1800 is the lightest snow blower I've ever seen. This makes it easier to maneuver but also could make it less effective for breaking into snow piles. Toro's lightness is because it is completely made of plastic. Some people grow concerned about this but there are only a few actual reports where the snow blower broke down in a short time. It looks like Toro snow blowers are well-built and they come with a two-year warranty. Finally, it should be mentioned that Toro snow blowers are made in USA, although so many things are imported from China nowadays.

On the whole, Toro Power Curve 1800 has more amps than any other electric snow blower and it is manufactured by an established brand. It costs more than others but you are sure to enjoy premium quality and performance if you get this product.