The native English bluebell flowers in springtime only and covers woodlands with a haze of purpley blue. There is something ethereal and luminescent about a sea of spring bluebells and loved by many, even more so because they bloom only for a few weeks.

It is a sheer pleasure to be driving along country roads and to catch little glimpses of bluebells in the woods. Taking a bluebell walk through ancient woodland is a wonderful thing to do with the family. See my map below for the best places to see the English Bluebell! Discover how to identify the English and Spanish bluebells, where to see the best bluebell woods and the legends that surround this beautiful English wildflower.

Facts About the Bluebell Plant

The Botany of the Bluebell

The preferred scientific name for a bluebell is Hyacinthoides non-scripta and is a perennial wildflower. The bluebell is a member of the Lily family and grows from bulbs with shoots emerging in January.

By April they flower but only for about 1-2 months and have gone for another year by June. They carpet wooded areas because they seed profusely and multiple shoots grow off each bulb.

As you can see from the image, each flower looks like a little bell and they can be not only blue but white too. Despite their sweet appearance and wonderful fragrance, bluebells are poisonous and can irritate the skin.

Bluebells grow in deciduous woodland. This is woodland that has a summer temperature of between 15 and 20Â°C and rarely falls below zero in the winter, rainfall in these types of woods is moderate, between 1000 - 2000 mm per year. Deciduous woodland has broad leaf trees that drop their leaves in autumn and this makes the woodland floor very fertile and rich in nutrients for the bluebell to grow. You can also see bluebells under hedgerows, meadows and cliffs. Bluebells cannot grow in deep shade, boggy earth or where there is heavy grazing from farm animals.

Bluebells have a few scientific names other than Hyacinthoides non-scripta. They have also been known as: Scilla non-scripta, Endymion non-scriptus, Scilla campanulata, Scilla nutans and Agraphis nutans. There are many nicknames for this flower too; Nodding Squill, Wood Hyacinth, Chimney Bellflowers, Wild Williams, Bats-in-the-belfry, Gramfer Griggles and Witches Thimbles to name a few!

The blue bell is the sweetest flower

That waves in summer air;

Its blossoms have the mightiest power

To soothe my spirit's care.

English Bluebells are an Endangered Plant - How to Protect the Bluebell

Sadly the Bluebell is under threat from woodland being cleared for farming or building, from people dumping their rubbish in the woods, deer or muntjac grazing, and from people picking or uprooting the bulbs.

The English Bluebell is also in danger of being taken over by or hybridised by the Spanish bluebell or Hyacinthiodes hispanica. The Spanish bluebell (pictured below) was imported to the UK in 1680 and is available to buy in garden centres, this plant is known as a "garden thug" because it easily hybridizes with the native Bluebell and populates itself vigorously too. Bees pollinate the invasive Spanish Bluebell with the English bluebell and this creates a hybrid specie called Hyacinthoides hispanica x non-scripta. With both the Hybrid Bluebell and the Spanish Bluebell, the poor less robust Wild English Bluebell is threatened with being eradicated by both of them. It's easy to get confused over what exactly is a native English Bluebell, take a look below at the various plants that could be mistaken.

The Bluebell is common throughout England and Ireland, but now is rare in the rest of Europe and completely absent in the rest of the world. However English bluebells are declining in the UK and have become a protected flower. It is estimated that the UK has half the world's population in wild Bluebells!

It is now illegal (since 1998) to uproot wild blue bells or pick them for sale without a special license from the government, and there have been a number of successful prosecutions against people who have done this. Read more about how to save the bluebell at the Natural History Museum

The native English Bluebell can easily be confused with other plants, which are also pretty, but not the real deal!

You can distinguish a native English Bluebell by:

3. The flower spike nods at the tip

4. The flowers have a strong curl.

5 The bell of the flower is narrower.

See above and below two stunning photos of the native bluebell, which give you an idea on how to identify them.

These are NOT English Bluebells!

The main differences are:

1. The pollen anther (the little tube inside the flower that holds the pollen) is pale creamy blue.

2. Flowers are not as deep blue

3. Flowers do not drop as uniformly as the native variety.

4. Colours can be pink or white as well as blue.

This robust plant is one of the reasons why our English bluebell is now endangered!

5. Flower lobes flick out rather than curl

6. Colours range in shades from deep blue to white.

Confusingly this flower is known in Scotland as the Scottish bluebell and the English bluebell is known as the Wild Hyacinth!

1. Is from a different family to the bluebells above, it comes from the bellflower family.

2. Flowers later, from July to November

3. Has pale blue flowers on thinner stems than bluebells

4. The flower shape is similar to that of the Spanish bluebell.

5. Is found growing on grassland.

Are bluebells flowering earlier each year?

Help scientists gather evidence of climate change by recording your findings of English and Spanish Bluebells.

Check out the Natural History Museum Bluebell Survey and help!

How to Grow Bluebells

It is illegal to uproot bulbs or collect seeds from English bluebells without a license, but you can buy seeds from reputable sellers. As this is a woodland plant, they do well in partial (but not deep) shade, preferably under broad leaf trees. They like to be kept moist, but not to be planted in boggy ground.

Place your bluebell seeds on a damp paper towel in a plastic food bag inside your fridge, keep them there for about 5 to 6 weeks then take out and sow. You could grow them in pots initially to give them a little extra protection from the elements and then plant them into the ground after the leaves have died back in the first year. If you grow bluebells from seed you won't get flowers until the second year, but after this they spread rapidly. Once they have flowered and the leaves have died back separate and divide the bulbs.

Where the bluebells and the wind are,

Fairies in a ring I spied,

And I heard a little linnet

Where the primrose and the dew are,

Soon were sped the fairies all:

Only now the green turf freshens,

And the linnets call.

Taking the family to visit bluebell woods is a lovely way to spend a weekend afternoon. 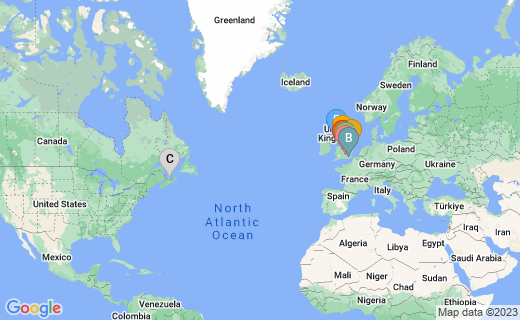 B
These gentle slopes are carpeted with bluebells, with views of the Weald and North Downs.:
Ide Hill, Sevenoaks, Kent TN14 6AY

C
The main drive and Lake walk are the best places to see these beautiful flowers.:
Mount Stewart in Co. Down, Northern Ireland

F
Castramon Wood has one of Scotland's biggest and best bluebell displays, set in an ancient woodland.:
Gatehouse of Fleet, Scotland, United Kingdom

Bluebells in Myths and Folklore

In the past the wood was seen as a mysterious and dangerous place, think of the fairy tales - bad things happen in woods! As the Bluebell grows in the woods and looks so other-worldly, it has some dark myths surrounding it.

Bluebells used to be known as "witches thimbles" and it was said the bells of the flowers would peal out at midnight calling to the fairies. Woe betide any poor unfortunate traveller who heard those bells - he would be dead in the morning.

Another myth is that If you wade through a carpet of bluebells, you will disturb spells fairies have hung on the bluebell flowers. Terrible things will happen if you disturb the fairy folk....

Bluebells have had many scientific names, one of which is its Latin name of "Endymion non-scriptus". In Greek mythology Endymion was a handsome young man who Selene, the goddess of the moon, fell in love with.

In fact she loved him so much she didn't want him to get old and asked Zeus to make him youthful forever. She then took it a step further, Selene loved Endymion the best when he was sleeping - so she asked Zeus to make young and sleep forever, so she could watch him. Zeus granted the wish and Endymion sleeps forever in a cave.

When there is no moon in the sky, that's when Selene is visiting him. So why is this story anything to do with bluebells?! Apparently bluebells can induce a dreamless sleep - but they are poisonous so please don't eat them!

Bluebells are also linked to the story of Hyakinthos, another beautiful young man who was loved by the god Apollo.

Hyakinthos was playing discus one day with Apollo and the discus struck him on the side of his face, killing him. In his grief Apollo wrote in Hyakinthos' blood "AI, AI!" which means "Alas, Alas!"

Out this blood the hyacinth flower grew. The bluebell is related to this through its preferred official name Hyacinthoides non-scripta.

For More Information About Bluebells......

A list of great websites for further reading and information on how to protect the English Bluebell.

Are you a fan of the Bluebell?! I want to hear your views on our English Bluebell!