Art Nouveau was an important bridge from neoclassicism to modernism and Charles Rennie Mackintosh (1868-1928) was one of the main exponents of the movement throughout the United Kingdom and Europe. It was a ‘total’ style encompassing architecture, decorative arts, graphic arts, textiles, furniture and even jewelry and Mackintosh, as an architect, water-colorist and designer was adept at all its incarnations. The idea behind this new art form morphed out of the Arts and Crafts movement but still had its own distinctive style and direction. Like its predecessor it took inspiration from Gothic art and for Mackintosh in particular, also an interest in Scottish architecture. It embraced the ideology of making art of part of every day life. The goal of the movement was to break down the barriers between fine art and the applied arts and to elevate even the most mundane items to art forms and they were very successful. Expressions of Art Nouveau could literally be seen on almost every street corner. Here was a movement that was designed around the needs of people as individuals and not as a mass with an emphasis on simplicity and beauty.

Mackintosh was born and educated in Glasgow, Scotland. In spite of his rumored dyslexia he was a good student and won numerous awards including the Alexander Thomas Traveling Scholarship for the “furtherance of the study of ancient classical architecture...” which took him to France, Belgium and Italy in 1890. Ironically by this time, he had come to regard Classical architecture as ‘foreign in spirit and far away’ and totally inappropriate for the climate of Scotland.

In 1884 he commenced evening classes at the Glasgow School of Art while apprenticing for the architect John Hutchinson (1841-1908). In 1989, the awards brought him to the attention of the newly formed architectural partnership if John Honeyman (1831-1914) and Keppie who recognized his exceptional skill as a draughtsman. He was to remain with the firm for twelve years, eventually being appointed lead designer until a combination of events culminated in his leaving the firm in 1914.

During his time with Honeyman and Keppie, he continued to win design competitions. In 1896 the firm won a competitions to design a new building for the Glasgow School of Art which was to become one of Mackintosh’s most important works in which his singular style became internationally acclaimed.

At the right are exterior views of the Glasgow School of Art building designed by Mackintosh.  This is probably his most famous building considered by many to be his greatest work of art.

The design was influenced by Scottish Baronial Style as evidenced by the imposing masonry. Art Nouveau manifested in floral and geometric design elements in iron works, windows, interior details and tiles. Inside, the Art Nouveau inspired decorative elements bring contrast and color to the rooms.

The floral motifs and geometric elements were designed in collaboration with his wife Margaret who was a very accomplished artist in her own right.

Mackintosh’s beloved grids are on the ceiling, chair backs, even the lights suspended from the ceiling form a kind of grid and the light streaming in from the windows creates a beautiful contrast with all the dark wood.

Mackintosh’s most important contributions were to the Glasgow School of Art where he was responsible for the design of the new building as well as its furnishings, the Willow tearooms in Glasgow that were designed for Miss Kate Cranston (1849-1934), as well as several private residences such as Hill House. He also designed furniture - for which his chairs are most famous, in his own name as well as for the firms of Guthrie and Wells.

When designing he aimed to unify all architectural and decorative aspects of his buildings which was typical for Art Nouveau. For instance, for the chain of Willow Tea Rooms, he (usually assisted by his wife) designed everything from the furniture, lights, murals, paneling, windows, even the menus and waitresses uniforms.

In 1893, under the auspices of Francis Newberry, the director of the Glasgow School of Art, he was encouraged to team up with Margaret MacDonald (1865-1933) who would become his wife and lifelong collaborator, her sister Francis MacDonald (1873-1921) and Herbert MacNair (1868-1955). The four of them became known as “The Glasgow Four” and together created distinctive designs in furniture, metalwork, textiles and posters.

Even though furniture design in most parts of Britain was dominated by the Art & Crafts movement, Mackintosh found himself being inspired by the journal The Studio an Illustrated Magazine of Fine and Applied Art (founded 1893) which featured the work of innovative artists and designers. It inspired him to explore designs in textiles, furniture and interiors as well as architecture.

His style was very rectilinear and sophisticated. His designs were typified by geometric shapes, bold straight lines combined with gentle curves and a palette of white and pastel colors which were highly unusual at the time. His favorite woods were oak and beech. He especially loved to use inlays in metal, pink, purple or amethyst colored glass, mother of pearl or enamel. In fact pinks and purples came to be known as the Mackintosh’s signature colors while a rose designed by Mackintosh was their emblem. Inspiration for decoration came from Japanese and Celtic patterns and was elegantly simple. Chairs usually had high back splats, legs on tables and chests were long and thin. Though the style was distinctly feminine it was not undulating and sensual like the interpretations coming out of France and Belgium. Nor was it hearty and masculine like the style found in English Arts and Crafts furniture. It was a style most distinctly his own though it would not really be recognized or appreciated as such until after his death.

Drawing for Hill House designed for the Walter Blackie family. Blackie specified that he wanted something “unique” and that the effect should be more that of a geometric puzzle fitting together than extreme ornamentation.

Mackintosh was influenced by several styles in building this house; the Arts & Crafts Movements, Art Nouveau and Scottish Baronial Style.

The house, as all of Mackintosh’s designs were built to have a cohesive flow from exterior to interior. Its been said that Mackintosh even told the Blackies what color flowers they should place in the home so as not to clash with the design.

House for An Art Lover

Competition Entry, 1901 Mackintosh & Margaret completed a portfolio of designs for a competition set up by a German design magazine. The theme was to design “a grand house in a thoroughly modern style.” Unfortunately, because their submission was late they were disqualified. In spite of this the designs were awarded a special prize for “their pronounced personal quality, their novel and austere form and the uniform configuration of interior and exterior.” Still, actual construction of the house didn’t commence until almost one hundred years later and was finally completed in the mid 1990’s.

Unfortunately, during his lifetime, his style was all but ignored outside of Glasgow. Though, after exhibiting his work at the 8th Secessionist Exhibition in 1900 in Vienna he was much admired by German and Austrian Designers for his confident, rational style and integrated decorating schemes.

In 1914, he and Margaret headed to London, though he was never to enjoy the type of success there that he received in Glasgow. His last years were spent devoted to painting, designing a few modest architectural commissions and textiles. His death of cancer in 1928 spurred a renewal of interest in his works and he finally received the recognition he deserved. He is now widely considered to have been an important contributor to the Art Nouveau Movement and a forerunner of the Modernist Movement. 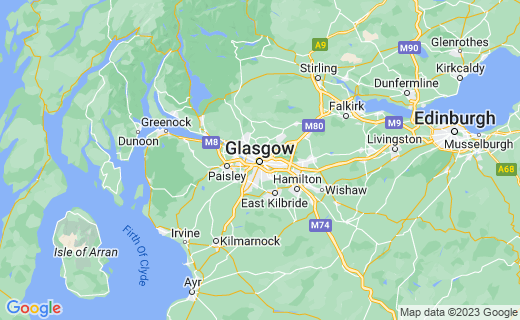