How Colorful Calendula Brightens My Gardens All Year Long

Of all the plants in my gardens, calendula, also known as pot marigold, is the most reliable and easy to grow. Its cheerful yellow hues can be seen during most seasons of the year on the California Central Coast. Its edible flowers add beauty to salads, especially if paired with the blue flowers of borage. Best of all, calendulas are the flowers that keep on giving. They reseed themselves easily, so once you plant a few calendula plants, they will produce a whole yellow border or bed.

I have been growing calendulas for about twenty years now, and they have all come from a few mother plants. As you will see in the pictures below, as they continue to reseed, they hybridize and some also revert to recessive colors in their genetic history. So while most of my calendulas are bright yellow, some of their children are orange. Their centers also can vary in color.

I have taken all the pictures in this article, except the one my husband took of me, and most of the flowers were growing in my own gardens.

Here's How I Have Used Calendula in My Templeton Gardens 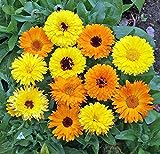 Pacific Beauty Calendula Seeds - 1.25 Grams
I believe this is the variety I bought. The picture matches what I have. I can guarantee they reseed prolifically.
Buy Now

How I Started Growing Calendula

I have three primary garden areas on our Templeton property, two herb gardens and a small bed by the pump house. This herb garden I can see from my kitchen window was the first. I also started to tame a portion of a slope near my front door by planting drought resistant herbs: lavender, sage, santolina, rosemary, and oregano. Into this mix I placed some irises and dusty miller plants. One year I sprinkled some wildflower and poppy seeds. Some of the perennial wildflowers still appear, but most don't. A few years ago I transplanted some calendula seedlings from the first herb garden, and they have been adding color to the green and gray foliage and mostly purple blossoms of the other plants since then.

I started my first calendula plants in the main herb garden around 1995. I sowed seed I had bought at a local garden center. I never needed to buy seed again. Each season I collected seed from my plants to sow in other parts of the property, including the vegetable garden. I saved some I collected in spring or fall to plant later on if I needed it. I had so much seed I was hoping I could find someone to trade with. If you grow calendula, you will never run out of seeds.

This main herb garden started with just a few plants, many of which are gone. I still have the marjoram, oregano, and thyme I started with. Along the back I put a root division from my common sage I had growing on the slope. I added a butterfly bush, a black sage, a white butterfly bush, and some rosemary to complete the back border. Near the front I put some lamb's ear, irises, and some daffodils to add touches of color in their seasons, and a yellow yarrow that grows taller than most. At one time there were both red and yellow poppies, but they stopped reseeding.

Later a friend gave me some lilies of the Nile and I also planted a chrysanthemum for more fall color. The lilies and the chrysanthemum are in gopher cages. I learned my lesson when I tried a shorter sprawling yarrow, but the gophers made a quick meal from the plants, as they did with the gazanias I once used as a border. They also occasionally attack my calendula, but there's so much of it, I don't much miss it.

This picture shows me in my first herb garden back in 2004. That year I had added some pansies in front of the irises. There's an orange poppy plant in back, and you can see some of the yellow and orange calendula to my left. I had just started the lamb's ear in the pot you see in front. I rescued what the gophers had left me of the one I had in the ground. At this time in my life I was not yet writing on line and I still had time to weed and care for my gardens. As I got busier, these herb gardens were on their own most of the time except for getting occasional water. As you'll see later, those few calendula plants eventually spread throughout the garden.

By the time I inherited my mother's house in Paso Robles in 2005, I had plenty of seed stored, but I decided to thin some of the seedlings in Templeton and transplant them instead of sowing more seed. That would give me flowers faster. All that was growing in the front flower beds at the Paso Robles house were some juniper bushes, a cotoneaster in the side yard and a lot of gazanias covering the ground near the house and some of the borders by walkways and in the side yards. Between the walkway to the front porch and the garage there was nothing but a bed of star jasmine with gazanias at the end toward the driveway. It seemed adding the calendula would add color faster than just about anything else, and I would never had to worry about it fading.

In the photo above you see what I've done to the front flower bed so far. This is the left side of the front bed by the house. At first glance, your eye is drawn either to the yellow calendula plants or to the pink petunia. The calendula blossoms will last, but the petunia will fade by the end of summer. When I inherited the house, nothing was in this bed but the large juniper on the left and the row of gazanias at the back, right up against the house. It has the dark green leaves, but you don't see many of its yellow flowers. This photo isn't big enough to show all the details.

Near the back between the juniper and the calendulas is a pot of grayish santolina I added last fall. you can barely see its bright yellow button flowers at the top because they are small. Right in front of the santolina is a chocolate cosmos I added two days ago, (June 11) and it will have maroon flowers and smell like chocolate. That front pot is full of catmint. To its left is an opal basil. To the right of the calendula is a newly planted dark pink carnation. The rather sloppy carnations next to the petunia are light pink and need to be trimmed back.

The pot you see at the right back is a tri-color sage. I divided a plant I had in the Templeton herb garden and brought it over here. That's also how I got the pot of santolina. Scattered around this area are seedings of both borage, which will be blue, and more calendula. The two always complement each other. I'm hoping that by July or August this bed will be blazing with color as the new plantings start to bloom. A good part of that color will be the yellow of the calendulas

Through the Year with Calendula - Most of these are in my own gardens. 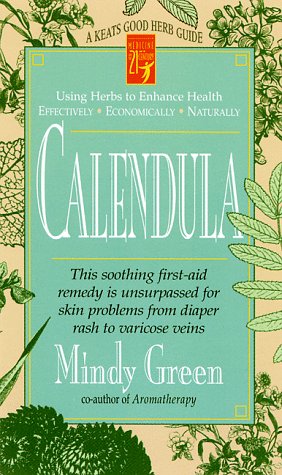 Calendula
This book zeroes in on just calendula and will tell you everything you need to know about how to grow and use it. I was impressed that there are even recipes. This book is on my wish list.
Buy Now

What's your experience with calendula? - There are many uses for calendula

You can grow it to add color to your garden. You can eat the calendula petals in soups, stews, salads, and even sandwiches and rice dishes. You can use it as an ingredient in bath mixtures and soap or as a hair rinse. Calendula dries well for use in dried flower arrangements, but the blooms also brighten cut flower arrangements in vases. The yellow calendula can even be used to make a yellow dye for wool.

How have you used calendula?

Calendula Seeds - I save them. Here's My Favorite Way to Eat Calendula - In my salad. We'd love to hear how you've used calendula in your garden, kitchen, or craft projects. What do you love most about it? Or maybe you've learned something new here. I'd love to know that, too.