My personal Review and Recommendation for such a simple yet effective device for accurate sowing of tiny seeds to minimise seed wastage and save time later in not having to worry about thinning seedlings; disturbing the roots less and encouraging healthy growth.

This is the dial seed sower I bought last year which has saved me hours of labour in not having to thin my seedlings later. As can be seen from the image, the principle is simple enough. You place your seeds in the centre well, dial to select the most suitable diameter hole to allow just one or a small number of seeds through at a time by holding the device at a slight angle and tapping gently. By tapping gently on the seed sower, holding it at a slight downward angle, the seeds then make their way (one at a time) down the channel which has a couple of ridges near the bottom to reduce the risk of several seeds shooting off at the end together, or too soon e.g. the end ridges helps to give greater control over the dispensing of the seeds. The greater the angle at which you hold the seed sower or the harder you tap it, the faster and more vigorously the seeds are dispensed. So with a little practice you soon get the hang of precision sowing.

Below are a couple of excellent visual guides in using seed sowers for precision seed sowing; between them they show you two distinctly different methods for precision sowing with one of the videos showing how you can make your own simple seed sower for little cost.

The above short video gives a good demonstration of the principle of precision seed sowing.

Above is an excellent video which not only shows how, as I did initially, make your own seed sower but it also demonstrates the technique in using these simple garden tools. Before I stumbled across this excellent simple seed sowing device I tried various improvised methods of my own, including using a brick jointer which is quite effective in that it has a nice v shape that enables you to gently tap small seeds down one at a time, although it doesn’t have the little lip at the end that gives that extra final control over planting the seeds individually.

The Benefits of Using a Precision Seed Sower

I grow all my own vegetables organically in our modest sized back garden and by doing so we are almost self-sufficient in vegetables the whole year round. By growing our own vegetables, potatoes being the only vegetable we need to buy in any significant bulk, not only is it healthier but we have also saved over £400 (almost $700) on our food bill in the last year.

Although gardening is a labour of love, leading busy lives time spent on gardening is precious, so anything that helps to save labour is a bonus. One area that can be time consuming in the early summer is the thinning out of seedlings; this is where a seed dial sower comes into its own. I found by experience that spending a little more time on sowing seeds thinly saves a lot of time a few weeks later by not having to spend so much time thinning the seedlings. It is a delicate balance in that not every seed you sow will survive and produce crops. Working on the principles adopted by the Victorians e.g. one for the pests, one for the weeds and one for you, I like to sow three times more seeds than plants required, and sow them singularly (close together) so that little or no thinning is required; and if any thinning is required there is little disturbance to the delicate roots of those plants left to mature.

However, for many seeds, they are so tiny that it is almost impossible to sow them singularly, quickly and efficiently; this is where I find the seed dial sower so invaluable. I found that with a minute or two of practice I was able to work quickly along each row in the seed beds, dibbing a half inch deep hole every few inches and gently tapping on the seed sower so that just one seed popped out at a time (on very rare occasions two) an into the hole. So each seed had its own individual hole into which it had a good chance to grow with the wasted energy of competing with its siblings; and therefore the best chance of its survival, subject to pests, weeds and the weather.

Sowing Seeds in my Greenhouse With the Dial Seed Sower

For root vegetables such as carrots, swedes and turnips I sow the seeds straight into the ground using the precision dial seed sower; for other small seed vegetables (mainly brassicas) I firstly sow these in small pots or seed trays with individual departments using the handy single seed sower handheld device. Then when the seedlings are big enough and their roots well developed I can then harden them off in a cold frame prior to planting them out in the open ground.

Below are a couple of photos taken in my greenhouse of seedlings in pots and departmentalised seed trays in their early growth. The seedlings in these photos are mostly brassicas including cauliflowers and broccoli.

Even in an ordinary seed tray, rather than just scattering the seeds thinly, using the dial seed sower is an excellent way to spread the seeds out thinly in a controlled way such that when it comes time to repot the seedlings or plant them out less damage is done to their roots as you don’t have to prise seedlings apart that have grown close together or next to each other.

Sowing seeds thinly and later in the month spending time thinning can be chore; I find it much easier and quicker to sow the seeds individually at the start, avoiding the thinning in the weeks to come. From experience, my preferred method of doing this is the dial seed sower. If this approach appeals to you but you are looking for something else then this simple seed sowing device may be to your liking.

Also, regardless to how you sow your seeds or whether you prefer to just thinly sow seeds (rather than individually sow them) and thin the seedlings later, a suitable kneeling mat is a must. 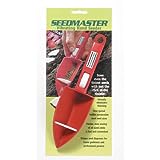 Rapliclip Seedmaster Vibrating Hand Seeder
Prior to buying the dial seed sower I tried a variety of methods for easy single seed sowing of tiny vegetable seeds, including a piece of angled aluminium and even better a brick pointing tool; all of which, like this handy garden tool, works on the principle of vibrating the seeds down a channel one at a time for precision sowing. Therefore, this handy seed sower, which works on the same principle of vibration, should make a good alternative choice to the dial seed sower which I currently use.
Buy Now

If you don’t have a dial seed sower, or any alternative devices, it’s easy to improvise. In the past (before I bought the precision seed sower) I found a brick jointer tool rather handy because it’s a small piece of steel with a grove in the middle that allows the seeds to roll down in a controlled way as you gently tap the tool while holding it at an angle.

More simply, even a small piece of cardboard bent into a V shape would be almost as effective; and cost nothing.