Ilona has gardened actively for most of her life and has been a writer and webmaster online since 1998. Homeschooled all 10 of her children.

Say It With Some Aloha

Are you familiar with the colorful, often fragrant world of tropical blossoms? Have you seen Bird of Paradise blooms outside your window, or plucked a Plumeria blossom from a tree for tucking beside your ear?

Whether tropical blooms grown in Hawaii are right outside your front door or a dream from a faraway place, it might be just the flower you wish to send or to choose for your wedding. You might even want a lei for a special birthday or an arrangement to mark a holiday celebration.

The first flower arrangement I received from my husband was a bouquet of red Anthuriums for Valentine's Day. It was one that was memorable, the bright red flowers were so unusual, their shape was an interpretation of a Valentine heart in themselves, pierced through with the golden arrow of the flower pistil. That is the type of impression that tropical flowers are able to make... especially on those of us in cold, landlocked climates.

Anthuriums are a cash crop in Hawaii. There are a number of varieties of Anthurium which come in several colors, mostly red to pink. As a cut flower they last for a long time, they can last for months in fresh water. 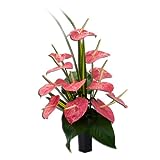 Hawaiian Flowers Dozen Pink Anthurium
These heart shaped flowers are so attention getting that you only need a small number to make a huge impact. Their very shape says "love"!
Buy Now

Tropical Flowers Are Loved For Weddings

Tropical flowers give a year around source for beautiful flower interpretations of many of our most loved wedding colors. Mango and tangerine, white and yellow, oranges, pinks, fuchsias, and reds. There are many shades of fabulous color just waiting to combine for gorgeous wedding displays and fragrant bridal bouquets.

.Tropical flowers are more expensive, perhaps, but fewer of them create a huge visual impact, and they are very long lasting.

Use Hawaiian Flowers In Floral Designs

A Tango Tangerine or Orange Red themed wedding? Let tropical flowers put your stamp on it.

Flowers which grow in Hawaii are both native and introduced species.

Anthuriums are shipped from Hawaii, where they grow as a cash crop. The blooms can last for months.

Aloalo, or as we commonly know them, Hibiscus, are grown throughout the Islands and were chosen as the official flower of the State of Hawai.

Strongylodon macrobotrys, or Blue Jade Vine, are flowers you won't soon forget once having seen them. They are native to the Philippines, and are often used in Leis. The blue-green flowers are vivid and arresting in appearance.

Plumeria are perhaps the flower most identified with Hawaii after the Hibiscus. They are sweetly fragrant, and grow on trees. Used in Lei's and lovely tucked behind your ear.

Bamboo Orchid - Arundina graminifolia are among the many types of orchids growing in Hawaii.

Protea are grown on the slopes of Haleakala Crater, on the island of Maui.

Heliconias, originally native to South and Central America, are grown for florist export.

Arrangements representing Hawaiian floral displays might include Red Anthuriums, Red Ginger flowers, Orchid flowers, such as Dendrobium together, among other Hawaiian flowers.

What happened to many of the native Hawaiian flowers and plants? The environment has changed, introductions from other parts of the world have choked out native species, and habitat has been lost. Yet, as always, there are survivors. Even the native Koa tree is being preserved although it is not found in abundance in the forests of the Islands. There is a difference between native flowers of Hawaii and those grown for use in florist shops, which are usually imported tropical varieties.

There are many lesser known flowers that are natives, these few are the better known.

This is where I saw these beautiful flowers firsthand. Imagine plucking a Plumeria bloosom from a tree for your hair! I did that.

Maui, Island of Aloha
Discover the Island of Maui. Yes, it is small, but the number of different scenes are amazing, from the warm sandy beach to tropical rainforest to the top of the cool mountainside, you will be delighted at the facet of this Island.
Buy Now

Care For Your Tropical Flowers

Bright Red Tropical - Hawaiian Flowers
A modern fresh look is achieved through artistic combining of beautiful tropical flowers, many of which come from Hawaii.
Buy Now

Red ginger, Alpinia purpurata, is native to the South Pacific, but introduced to Hawaii sometime before 1930. It has become naturalized on the Islands. It is not edible ginger, and as a cut flower it takes the plant about 3 years to come to harvest. Then, once blooming it will bloom year 'round.

Hawaii grows red and pink ginger blooms for flower exports. They are treated with pest controls and with preservatives before export.

Another plant grown for the Ginger flower is the Kahili Ginger, native to the Himilayas. Hedychium gardnerianum Ginger is seasonal in Hawai'i and starts blooming in August, continuing into the fall.

Use Hawaiian flowers with the more common roses in your bouquets and arrangements for a pop of new color and unusual contrasts.

Strelitzia, or 'Bird of Paradise' flowers are native to South Africa. They bloom from September through May, and are often used in tropical flower displays because of their graceful and colorful appearance. Being quite sturdy, care must be taken to protect more fragile flowers from being bruised, when including the Strelitzia blooms.

Native to the tropical Americas and the Pacific Ocean islands, and sometimes called "false Bird of Paradise". They come in colorful shades of reds, oranges, yellows, and greens. It is the showy bracts that help make them desirable for floral arrangements. There are many varieties .

Hibiscus flowers that are usually seen growing are of a species that is not native to the Islands. Growing on a shrub, Hibiscus flowers last only for a day. The Hawaiian Hibiscus (Hibiscus brackenridgei) is the one chosen as the State flower and native to Hawaii.

The Hibiscus bloom shape is often sued as a stylized pattern in Hawaiian prints.

Because its flower is short lived, the Hibiscus is mainly used as a patio or houseplant in Northern climes, and you won't be likely to see it in arrangements.

Leis are strings of Hawaiian flowers and natural plant material

Enjoying the Aloha music while watching how the leis are made

Plumeria leis can be ordered online.

Mist with cool clean water and loosely wrap with newspaper to absorb excess moisture. Some lei suppliers may wrap leis in ti leaf.

Mist leis and re-wrap in ti leaf until ready to use.

Keep leis away from heat and temperatures below 45 degrees F.

Fragrant leis should be used immediately.

A brilliant green container and exotic palm leaf provide the perfect backdrop for purple orchids and a mix of delightful tropical flowers.

All types of orchids thrive in the warm tropical coast and mountain forests of Hawaii.

Tips for dendrobiums and other orchids:

Recut stems once or twice per week.

Use clean water with or without a floral preservative.

Keep flowers away from heat sources.

Can you tell which one is artificial?

Which arrangments do you prefer?

Aloha, talk story with me