How to Care for Orchids

Orchids are some of the most exquisite, most exotic flowering plants in nature. They are so different from typical houseplants that many people shy away from them, thinking they are too difficult to care for, but they really are an easy houseplant to care for once you know a little bit about them.

The most common type of orchids grown in the U.S. are Phalaenopsis orchids, commonly known as "Moth Orchids," of which there are over 60 species. Moth Orchids come from south-east Asia, India, Papua New Guinea, Taiwan, the Philippines and Australia, where they grow on trees as air plants, thriving in the tropical humid conditions. Although they bloom only once a year, their blooms can last for months. The flowers form off long shoots, creating a graceful, delicate looking plant, and their blooms can last for 3 months or more if cared for properly.

Moth Orchids need bright but indirect light. Behind curtains or window blinds, a north or east facing windows or a partially shaded west or south window is ideal. Yellowish-green or red leaves indicate that your orchid is getting too much light, while a plant with dark green leaves and/or that is not blooming is probably not getting enough light.

A plant getting adequate light will have bright green leaves that are about the same temperature as the air around them and will bloom during the proper season. If the leaves feel noticeably warmer than the surrounding air, move the plant to an area of less intense brightness.

In their natural environment, Moth Orchids grow in temperatures between 62 degrees at night and 80 degrees during the day. Of course as houseplants, orchids are in at constant room temperature of about 68 degrees in the winter and 74 degrees in the summer, which is adequate for Orchids. You should expose your orchid to nighttime temperatures of 58-60 degrees for about a month or so during the fall or early winter to encourage the plant to produce its flower spike. If you keep your windows open in the fall, this should be sufficient. Alternatively, you could place your orchid in a basement, semi-heated garage or even a spare room that you can cool artificially at night.

Phalaenopsis prefer a moderately humid climate of at least 50%. You can increase the humidity around the plants by grouping them together or by misting them each morning.

In nature, these plants grow on trees and their roots are accustomed to drying out between waterings. The roots are actually covered with a white or silvery water retentive covering called velamen that holds water like a sponge.

If your moss orchid is growing in a bark mix, water it once a week using one of the two methods. Remove the orchid pot from its decorative container and either set it in several inches of water for 5 minutes or water it until the water freely runs out the bottom. Allow the orchid to drain for several minutes before placing back in the container.

If your Phalaenopsis is growing in sphagnum moss, you will only need to water it about every 2 weeks since the moss generally retains much more water than a bark-based mixture. To water, use one of the two methods described above.

Fertilize your Phalaenopsis Orchid using a balanced 20-20-20 fertilizer diluted to a ratio of one level teaspoon to one gallon water once a month. 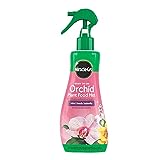 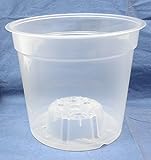 The following signs indicate that your orchid is ready to be repotted.

Prepare your potting mix by pouring the volume of mix you think you will need into a container that will hold twice the volume. Fill the bucket with hot water and let the mix sit overnight. The next day, strain out the water and it is ready for use.

Carefully take the orchid out of the old pot and remove the old potting medium from around the roots. Cut off any dead roots--these will be brown and mushy. If the roots are healthy and filling the pot, repot the orchid in a pot just one size bigger. If the roots do not look healthy, repot in the same container, making sure not to over water. Repotting an orchid with rotting roots in a larger container will encourage more root rot from the extra potting medium around the roots..

Replant the orchid so that the new shoot is level with the pot rim. Press enough new potting medium around the plant to secure the orchid in the pot so that it doesn't wiggle. Place a wooden or bamboo stake into the pot and loosely attach the new and old stems using clips or ties.