How to identify dandelion

Dandelion (Taraxacum Officinale) is considered in many places a noxious weed. You probably played with it as a kid, blowing the seeds in the wind, and fought with it as an adult trying to comply with proper garden etiquette.

Like most weeds, it is persistent, hard to eradicate, with a very efficient reproduction system and develops in different types of soils, temperatures and water conditions. It prefers somewhat wet soils with not much competition. They are actually the first weeds to colonize distressed land because the flying seeds can go a long way.

It also happens to be edible from flower to root, and packed with nutrients. The leaves can replace any food we prepare with spinach, the flowers make a great tea, and the root can work as a coffee extender.

Many health benefits are associated with dandelion: It is diuretic, cleanses the liver, and has anti-inflammatory properties.

So the question is: why fight to eradicate a superfood that is packed with benefits and grows right on your backyard? Why go and buy spinach, when you can pick it up fresh at the moment of eating? It doesnÂ´t get fresher than that… and if you keep your garden chemical free, you have real organic food for free. Not a bad deal at all.

This lens contains information from the Ebook "Dandelion, Health from your garden". You can get it completely FREE clicking on the image above.

One of the main issues when harvesting wild plants is to make sure we have the right one, and not a poisonous cousin. In this case, it is easy because all the dandelion "posers" are edible as well.

Dandelion has a very characteristic shape with a floret of leaves on the base, and a flower rising on a single steam up to 30 cm. The leaves are shaped as the "mouth of a lion" and the flower is bright and yellow. Once the plant seeds, you have those beautiful puff balls, kids of all ages love to blow in the wind.

The seeds germinate easier in warm climates with some dirt and some humidity. They do not need any special treatment. Since the leaves form close to the ground, they do not withstand competition from long grass. They do great in cracks in the sidewalks for example.

Dandelion is a perennial plant, the flowers appear in the early spring and stay around coming and going almost until fall, when they vanish till the next spring.

It is better to collect the leaves before the flowers appear; they become very bitter after that. The bitterness can be reduced by boiling the leaves.

Any time you see the floret, the yellow flower or the puffball... pay attention, you might be in front of a beautiful dandelion.

The flower is bright yellow and about 3 cm wide. It has many petals and the shape is somewhat convex looking from the side. From that perspective, you will also notice that it has a double set of sepals with the inferior one curving down. This is very unique of dandelion when you compare it with some of the similar species and an easy way to recognize it.

The peduncle is hollow, and it has a white sticky sap that can be used as glue.

Later on, the flower closes to prepare for the seeds. The full maturation process takes about one month, and at the end it opens up again to show the typical white sphere kids of all ages love to blow in the wind.

Dandelion leaves are soft with a shape that looks like the mouth of a lion. This is the origin of the name actually, it is a deformation from the French: “dent de leon” (teeth of lion); in Spanish, the name is “diente de leÃ³n” which has the same meaning. In the present day, the name in French is “pissenlit” which is related with its diuretic properties.

In the image you can see a typical leaf. New plants can have leaves not so well defined; once the leaves are cut (for example with a lawn mower), the ones that grow later have a more definite shape. The texture is usually hairless, but rarely there are soft – almost imperceptible – hairs on the front due to cross pollenization. There are around 50 species.

Wild lettuce is one of my favorite "weeds" of all times, they are awesome in salad.

The leaves have a similar texture to dandelion, but they donÂ´t have the lion teeth.

The flowers can be yellow or purple. The yellow ones are very similar to dandelion, but they have a single set of sepals, they are smaller and grow in groups.

Another difference is that it grows much taller.

It has relaxing properties, so donÂ´t eat it if you need to be lucid afterwards.

They are edible and have very similar properties to dandelion. So if you confuse it, you are in good shape anyway. The taste is softer to dandelion, and you can find variations in leaves depending on where they grow and the age, from very soft to cardboard style.

Sonchus has many other variations, most of them edible. But, there can be texture issues (hairs, spikes and the like).

This plant looks similar to dandelion as well, it is sometimes called false dandelion.

It has a base floret of leaves and yellow flowers. The leaves are slightly different to dandelion: for starters they are hairy; and instead of the sharp indentations, they show a soft wavy border. The flowers are different too--they are smaller, and they donÂ´t have the double set of sepals, they also come in groups instead of singles. The seed ball is yellow instead of white and much smaller than dandelionÂ´s.

Cat’s ear is edible, but the leaves can hold a mycosis known to affect horses. I donÂ´t know of any human affected by it, but it is probably better not to eat the leaves raw just to be on the safe side. The flowers can be used in any recipe for dandelion flowers (see flower recipes).

Dandelion has been used in traditional medicine since the down of time. An interesting detail is that it was used by cultures that are not known to have had contact.

Some of the benefits are: anti-inflammatory, diuretic and antibiotic.

It is a very nutritious green, considered among the 10 most nutritious. This alone adds many health benefits acting over vitamin and mineral deplection.

I added the health information from the Ebook Dandelion, Health from your garden to another lens. I went to the medical literature and found out what is the state of research, quite promising. You can see it in the lens Health benefits of dandelion. 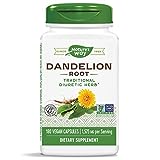 Comments? questions? - They are all welcome!