Introduction to The Gardens

Part of The Irish National Stud, The Japanese Gardens at Tully Co Kildare are a must see when visiting Ireland. Renowned throughout the world as being the best example in Europe, it is a place once seen you will not forget. An exquisite example in Japanese garden design of the early 20th Century, it is a tranquil garden for reflection and meditation in a beautiful setting that has been loved for 100 years and attracts 150,000 visitors a year. Situated 25 miles south west of Dublin, it is very accessible when visiting the capital.

My first visit to the Japanese Gardens and National Stud was as a young schoolgirl on a school trip. Even as an 8 year old the sheer artistry and wonder of seeing miniature trees, unusual bonsai, beautiful flowers and a tea house all landscaped with love and attention to detail, has stayed with me through the years.

I have since returned many times with my family and my interest in Japanese Gardens has only heightened.

Elements of a Japanese Garden

What is a Japanese Garden?

Gardens also featured the unusual trees, mostly evergreen varieties and the abundance of exotic flowers. Seasonal changes were also an element in design consideration from hot wet summers to the snowy winters.

Influenced initially from the Chinese, Japanese gardens had developed their own path by the 17th Century, concentrating on their own rich heritage of beliefs, religion, traditions and materials available. Through the centuries there have been different types of gardens take shape for example the pleasure gardens (beautiful and recreational) enjoyed originally by Japanese Emperor’s and noblemen or the Buddhist temple gardens focusing on meditation and contemplation.

A Place for Reflection

History of The Gardens

A wealthy Scottish businessman by the name of Colonel Hal Walker devised the idea of bringing a piece of the Orient to Ireland. A keen horse breeder, he had already purchased The National Stud in Tully, Co Kildare and set about making his idea for a Japanese Garden a reality.

He hired Japanese master horticulturist Tassa Eida and his son Minoru to lay the garden and supervise the forty Irish gardeners also employed. The project took 4 years to complete (1906-1910) with plants, bonsai, stone ornaments and a geisha house (tea house) being imported from Japan.

Executing to perfection, the concept of the garden was to create the journey or “Life of Man” from the cradle to the grave incorporating traditional Japanese garden elements.

Tassa Eida left Ireland with his wife and 2 sons in 1911 for London, England to work on another garden. Sadly he died the following year on his return journey home to Japan.

Nothing was heard of his family until the late 1980’s when Brian Eida, son of Minoru, arrived at the Japanese Gardens in Kildare to see the great work done by his late grandfather Tassa Eida.

The Beauty of Nature

The Journey of Life

The Story of The “Life of Man”

The garden tells of man's journey from birth and the choices he must make in life.

It starts at the Gates of Oblivion which symbolizes the soul choosing the body.

The birth is depicted by a Rock Cave and is immediately followed by a narrow dark tunnel, the tunnel of uncertainty and ignorance experienced by the infant.

The next path is one of discovery as the young child grows through the Hill of Learning before following a meandering stream at the end of which he is faced with 3 different paths to choose.

The first is the straight road depicting bachelorhood, the second path lined with Cherry trees symbolizes a life of materialism and self indulgence and the third path leads to the Island of Wonder, and marriage.

The uphill climb to the Hill of Ambition is eventually reached and after following a number of blind paths, both married partners arrive and enter the Garden of Peace and Contentment.

This is depicted by a tranquil setting of a calm gentle stream, green tended lawns and cool shady trees.

The end of the journey or life is reached upon entering the Gateway of Eternity.

Along the journey keep an eye out for the

Engagement Bridge, the Marriage Bridge, the Honeymoon Path, a Tea House, the Well of Wisdom, the Bridge of Life and the Chair of Old Age.

What Else to See When Visiting

The Japanese Gardens are one of four attractions at The National Stud.

The other attractions are:

Originally purchased by Colonel William Hal Walker at the turn of the 20th Century, it now belongs to the Irish people. Respected and known throughout the world, The Stud Farm has a long history of being a premier breeding farm and continues to breed successful racehorses.

World class mares have been continually sent to Tully’s famous Stud to be covered by their stallions and the foals born are a constant and natural delight for visitors. It has a long history of winners dating back to King Henry VIII of England, when his horse Minoru (named after the son of Japanese garden designer Tassa Eida) won the Epsom Derby.

In 2011 the farm played host to Queen Elizabeth II, on her historic trip to Ireland.

The museum is a wonderful trip down memory lane for all followers of horse racing where the star of the show is the legendary horse Arkle who was the most famous and successful Irish horse ever.

Three times winner of the famous Cheltenham Gold Cup, he has gone down as the most successful steeplechaser the world has ever seen. His name is so well known; fan mail with the address “Arkle, Ireland” was instantly recognised and would be sent to his stable.

He was also known for being partial to a drop of Guinness, a true sign of his Irish heritage! Now more than 40 years since his passing, his skeleton takes pride of place in the museum.

In this garden named after the patron saint of gardener’s, you step back in time to monastic life in Ireland during the 6th or 7th Century. St Fiachra overseas the garden by way of a beautifully carved stone statue in the lake.

It was created in 1999 by acclaimed landscape designer Professor Martin Hallinan.

What is interesting is the fact it shows the raw Irish landscape in a bygone era that has so much familiarity yet is a time none of us knew.

Natural woodlands, waterfalls, streams, lakes and wetlands all combine to bring an Irish setting that on paper may not work next to a Japanese designed garden but it translates perfectly. 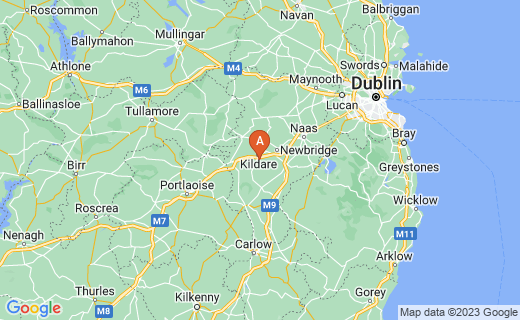 For further information on the Author, to read her bio or see a full body of works check out @ Suzie HQ

A visit to the Gardens is well worth taking. Set in the glorious county of Kildare, the Gardens awaken the senses through the combined elements you would expect to find in a traditional Japanese Garden. Being part of the National Stud, it offers visitors the unique opportunity to visit the other attractions, enjoy a bite to eat in the restaurant or bring a picnic and enjoy this little piece of Japan in Ireland.

Credible Resources When Planning a Visit -