Wasps and hornets are my personal nemesis, and I'm sure they are yours too if you've been trying to prevent them from colonizing your home and terrorizing your family.

Here's how it starts: one day you begin noticing wasps swarming as you coming in and our of your home or when you get in and out of your car. Unfortunately, it's too late. Wasps have already established a colony on your turf.

At our house, we've has wasps drop out of the ceiling, come into our home around the windowsill and much, much more. While quietly working in my quilt studio, I would hear buzzing IN THE WALL!!! Our house was alive!!

After countless cans of pesticide, we finally pinpointed a problem--a large gap between the metal roof, gutter and soffits. They have free range to the entire insides of our house. There were dozens of nests inside the soffits, I mean new ones, old ones, big ones, small ones. Everything.

We even had wasps start a colony inside our A/C compressor. Naturally, they chose the control panel area where they started a nest on the contacts, which prevented our system and thermostat from working properly.

It's amazing what wasps are capable of. If you have an allergy or you know someone who does, you don't even want to think about what they can accomplish.

Who Do You Hate? - Wasps, Yellow Jackets or Mud Daubers?

Which One Do You Love Hate More?

Wasp Traps - Catch 'em While You Can

Recipes for wasp traps vary from using a sugary non-diet soda to sugar water laced with apple cider vinegar. Most recommend adding a drop of dish soap to help eliminate the surface tension the keeps wasps afloat. Remember: Wasps look for protein like meats, cheese and cold cuts in the spring and sweet sugary foods like jelly, jams, and fruit later in the season.

Wasp traps are one of my favorite ways to tackle these nuisance pests. It's passive and highly effective. I bait my wasps traps with frozen fruit concentrate. Add a large tablespoon of frozen concentrate to approximately two cups of water. Add to traps, and top of with water if necessary.

In March 2012, my three traps caught approximately two dozen wasps over the course of one week.

This is the exact model that I have. It features six entry holes and a seductive yellow color that attracts all types of wasps.

They're cheap. However, the plastic eventually breaks down with all of the UVs, so it might pay to invest in a glass trap--as long as you don't drop it on a hard surface.

Colored glass traps are also available. They are more expensive, and they can still break.

Billy the Exterminator (you gotta love this guy!) shows you how to make your patio a more enjoyable place to spend time with simple tricks and tips to catching wasps and flies and create an ant proof barrier.

I first saw the electrified tennis racket style fly swatter on this show, so I own him all the credit!

Where the Heck Are They? - Have Wasps Set Up Shop Near Your Home?

Where are they hiding? Identify Your Wasp Populations - Do You Have a Dozen Different Wasps? Find out what they are

Yellow Jacket Wasps - How to Identify Them

These wasps are smaller than some of their cousins, and they are nasty! They love to hanging around picnic areas, so it's very easy to come in contact with these bugger and consequently get stung by them. They are very similar to the European wasps, which is an invasive species, and they are also similar to other yellow jackets accidentally introduced from Europe.

All sphex are part of a taxonomic group known as digging was They are carnivorous, predatory and drag they prey into underground burrows. I find these one all over the place. Especially late in the season. These can be identified by the metallic blue color of their wings. The official Latin name is Sphex pensylvanicus.

It's 2014 wasp season. Vigilance in the past few years have lessened the severity of the problem, but there are still a variety of wasps around. The first days when the wasps wake up are still the best for catching and killing queens with our electrified fly swatters. It still pays to patrol, especially in sheds and spaces where the wasps are known to build nests. They're fairly easy to get when the nests have just been constructed. 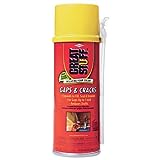 Filling gaps with insulation foam is one of the most effective, non-toxic and permanent pest control measures. This stuffy is mess, impossible to clean and even unsightly, but it does the job. We used this to successfully close up gaps between our roof and soffit. The whole building had a big gap that ran along the edge. Our landlord got furious when we filled it and threatened to have our home rented in one day, but what can we say, if he had helped us remove the wasps when we asked! He also thought we closed off vital ventilation spaces, but that wasn't the case....That's a story for another day.

P.S. Cans are designed for one-time use. Foam expands over several minutes. For a professional finish, trim edges and seal or paint the exposed foam in a neutral color. Otherwise it will age, darken and weaken over time.

P.P.S Don't wear your favorite winter jacket like I did. :) This stuff sticks to everything, and it never comes off.

Are You Having a Wasp Problem? - Have you had a was problem in the past?