Lessons from a Wartime Teenager

Life as a teenager in World War Two

My mum was eleven years old and living in rural England when World War 2 began in 1939.

For the next six years - you could say her formative years - she lived her teenage life during a period of rationing, shortages and hard work.

If she was still around today, she'd say that today's teenagers can't imagine what it was like.

She married my dad a couple of years after the war - he was stationed in North Africa until 1947 - and had to wait for several years before they could afford for mum to give up her job as a waitress and start a family. There was no maternity leave or maternity allowances in those days.

I often smile to myself when I'm doing something thrifty and I think 'Mum would be proud of me for doing that.'Mum's wartime habits and way of life continued though in that she couldn't bear to see waste.

I'm not sure that the word 'recycling' was even used in those days but most of us today could take a leaf out of her book.Sometimes I smile to myself when I look at my home and realize that I'm the lessons she taught me. Sometimes I think she would be proud of me.

Saving fuel and saving water were always high on my mum's agenda.

Make do and mend

Not a scrap wasted

Girls in the Second World War Just one of my mum's tips

There were so many but this is one that I use almost every day. My mum had the most beautiful skin on her hands. This is despite that fact that she never wore rubber gloves, she did the dishes by hand and everything else to abuse her skin. The secret was olive oil and sugar. I guess you could use any cooking oil. Hold one of your hands palm upwards and pour a teaspoon of oil onto the palm. Add a teaspoon of sugar. Now rub your hands together as you would if you were using hand cream.When you've done, rinse your hands in warm water and your skin will be wonderfully smooth and exfoliated. Try it - it's brilliant!

There are lessons for all of us in these fantastic books. Although none of us would like to go back to the privations of wartime, we can still take a leaf out of the wartime book (literally) and learn more about good, healthy cooking, recycling and more. For people during the war, this was essential. It's not essential for us (yet) but we can learn a great deal about how we can help our families, our bank balances and the planet by adopting simple wartime methods.

The Taste of War and the Battle for Food
Buy Now 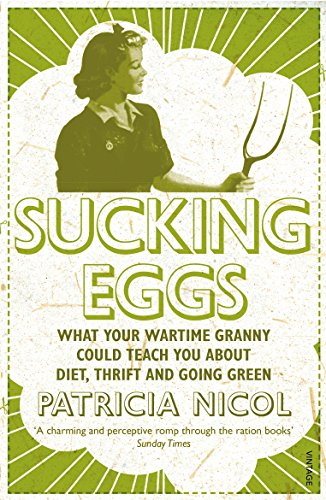 Sucking Eggs: What Your Wartime Granny Could Teach You About Diet, Thrift and Going Green
Buy Now

This shows my mum's national identity card from wartime and my dad's clothing rationing book. The other piece of paper is from after the war but still interesting. It's from the Welfare Foods Service and gives free 'vitamins' for the baby (me!)

The vitamins were simply ... cod liver oil. This document also allowed my mum to buy orange juice for the baby for fivepence a bottle; that's probably less than one cent in today's money.

Sometimes, it seemed that everything my mum cooked was made in the pressure cooker. It was a fierce, steaming beast that would hiss and splutter quite alarmingly! Today's wonderful models are completely different but one simple fact remains; they cook most foods quickly (to save electricity) with all the goodness in the food.

They're not just for stews and casseroles either. I remember my mum making truly delicious foods of all kinds using her pressure cooker. Take a look at today's versions - they are a great way to cook and perfect for today's healthy diets.

I remember my mum using all these appliances. When did we become so lazy that we had to rely on electricity to perform a simple task like beating a few eggs for example? I have the egg beater shown below and it's excellent - it can be used for so many jobs in the kitchen and is a lot easier to clean than a mixer or blender.

My Mum in the Second World War

That's my mum on the left. The photograph is undated but she was born in 1928 and war broke out in 1939 when she was eleven, going on twelve. I think she looks about fifteen in that photograph, don't you?

Her mum, my grandmother who is on the right died in 1944 which was before the war ended so that helps to date this picture.Also you see my lovely granddad who I only just remember - I was six when he died - and mum's brother, my Uncle Tom - born just a few years after Mum - who at time of writing is still going strong.

My mum died in 2006 just a year after her great-granddaughter had been born (almost to the day). I like to think that she'd chuckle to see that I still keep her frugal and planet-friendly wartime ways - she taught me well. 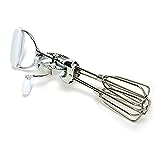 If only these had been available

My mum would have loved these, especially the solar oven. She was an expert at filling the regular oven to the absolute brim - squeezing potatoes into every available space to be used later. Oh, and after she'd finished using the oven, a brick would go in there. Why? Because it would absorb the heat and, wrapped in a towel, would be used as a bed warmer!

Thanks for visiting - please say hi!