With an Electric Bread Maker

Baking Your Own Bread these days with modern bread makers' couldn't be simpler.

Not that many years ago making bread in the oven was often an art, time consuming, labour intensive and could be hit and miss as to whether the bread would rise or not; becoming light and fluffy or stay a heavy stodgy lump and hard to chew.

This article, based on my own personal experience and knowledge aims to highlight some of best of these modern bread making ovens (with recommendations) to help you make an informed decision before buying.

And to finish the article I take a little peek in our past with the origin of bread making, and not too long ago how bread used to be made in the home.

DeLonghi Bread Maker
This bread maker is identical (in all but name) to the Kenwood we bought in Britain; I guess Kenwood trade under the DeLonghi name in America. In any event, having used this machine for a good few years with excellent service I highly recommend it as a first choice option when buying a good quality and reliable bread making machine.
Buy Now

Making Your Own Bread Has Become Economically Viable

For the past century housewives have dabbled in making the occasional loaf of bread in the oven, although more often bread rolls as a family treat because (unlike previous centuries) bread loaves have been a staple diet and relatively cheap to buy in the shops; far outweighing the cost, time and labour in making your own bread.

Until quite recently (within the last ten years) bread was generally quite cheap to buy and often we would buy bread on offer in bulk when it was nearing its Sell by date and use it to fill any spare space in the freezer. Now even the cheaper brands are expensive and finding good offers on old stock has become more difficult. So you can now make your own bread as cheaply as buying it; and if you get it right it can be far superior to anything you can buy in the shops; much healthier if you don't add all the salt commercially produced bread contains, especially if you use wholemeal flour. And with the availability of good bread making machines making bread these days is as easy as ABC.

Cuisinart CBK-200 Convection Bread Maker, 12" x 16.5" x 10.25"
Lots of good features to consider including 16 pre-set menu options with over 100 bread, dough, sweet cake, and jam combinations. So a serious machine to consider; reviews are mixed but two thirds of them are highly positive so it’s a machine worthy of consideration.
Buy Now

You Get What You Pay For

Once we decided to buy a bread maker and make our own bread I did my usual research weighing up the various options and from that concluded that generally (as is often the case) you get what you pay for. So rather than just going for a cheap bread maker which would do the job we opted for one in the mid-range which did everything we wanted and more e.g. it also makes jams from fresh fruits harvested from your back garden or picked from the wild.

The Model we chose was a Kenwood bread-maker, and in doing my research for this article I noted the same model is branded as a Delonghi in America. Unlike some products the brand name doesn't seem so important it's whether the bread-maker has the capacity and range of options that meets with your expectations that's more important; often reflected by the price you intend paying.

We've been using our bread maker (with 20 programmable recipes) quite a bit for the past few years, mainly sticking to our favourite two or three recipes. We're well pleased with not just how easy it is to use but also the high quality of the bread, and how light and tasty it can be; especially when straight from the bread maker machine when it's still nice and warm. We haven't tried to make any jam in it yet but as our raspberry canes in the garden become well established I'm sure it's only a matter of time. 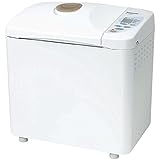 Panasonic SD-YD250 Automatic Bread Maker with Yeast Dispenser, White
Full range of features that you expect from a good bread making machine, with recipes for 40 breads and doughs, plus baking tips, does cakes as well as bread with a staggering 90% of reviews (almost 900) being highly positive; therefore making this a serious contender for consideration when choosing your bread making machine.
Buy Now

Up Side and Down Side of the Kenwood Bread Maker

The major upsides is that you just place all the ingredients in the container, press a few buttons to select you desired program and leave it to get on with it; simplicity in itself. And having 20 Programmes on plastic display cards on the handle has proved extremely handy for quickly flicking through and selecting the recipe program of your choice.

The only two minor irritants we've experience is the numbers and symbols on the green LED Panel can be a little hard to see so if you're not careful there's a risk of selecting the wrong programme for the ingredients and ending up with a loaf that doesn't rise properly; and the paddle sometimes gets stuck in the bottom but it's not difficult to cut out.

The Greatest Invention Since Sliced Bread

How to Make and Bake Bread in Days Gone Past

In Britain, our middle and upper class Victorian and Edwardian ancestors had dedicated coal fired bread ovens built into their ranges, often adapted from the large coal fire ranges in the rather grand Georgian houses in previous centuries; and baking their own bread (often done by the servants) was a way of everyday life. The image above shows such a bread oven; photo taken of a Victorian bread oven at Home Farm, depicting Victorian life during our recent visit to Beamish, England.

In fact from the end of the Stone Age to our Modern Age bread has been a staple diet worldwide and was one of the key factors in mankind settling from nomadic hunter gatherer tribes to farming when in southern Turkey about 11,000 years ago we first domesticated wild wheat.

On domesticating wild wheat we quickly learnt the art of refining the wheat to flour and from there acquired the skills to making bread. In the wild wheat is naturally contaminated with yeast (a fungus) and if the grain is crushed, mixed with water and allowed to stand long enough then (as with making wine) the dough will ferment and if then baked will make a Rustic bread; this would seem to be the obvious accidental discovery (as significant as discovering the wheel) from which over thousands of years the process of baking bread has since been refined.

Keeping Your Bread Fresh for Another Day

Chances are, even if you make a large loaf it's so tasty it'll be demolished by the family in a day or two anyway so you'll probably not need worry about keeping it fresh. However, if for any reason you need to store it for more than a couple of days I found the best way to keep the loaf fresh is to place it in an empty bread bag. I always try to keep a few in the kitchen drawer from shop brought bread as bread bags are handy as food bags (for sandwiches) and for homemade bread; although a homemade loaf straight from the bread maker will be too big to fit into a bread bag until the family have had a few slices from it. Once in the bread bag storing in the fridge will keep it fresh longer than ordinary shop bought bread would keep in the fridge e.g. normally for a week although on one occasion I found a couple of slices in a bread bag shoved to the back of the fridge that had been there for a couple of weeks that was still fresh enough for toast.

We also keep sliced bread for daily use in the breadbin; recently a friend was throwing his old breadbin away so (as it's a suitable size for homemade bread) we took it off his hands and I'm glad we did as its rather handy just to pop the freshly made homemade bread (once cooled) straight into the breadbin; especially when the fridge is full.

Making Full Use of Your Homemade Bread, Even When It’s Gone Stale and Past it’s Best

For toasting the homemade bread (especially from the middle of the loaf) is often too large to fit into a toaster, so unless you make your toast under the grill cutting the slice in half you can toast the two halves separately.

Home Made Bread vs Shop Bought

Do you Buy or Bake Your Own Bread?