Ode to My Melitta Mill and Brew

I've owned my Melitta Mill & Brew for about 12 years and thankfully it is still working. I thought for a while I would have to buy a new one, but I was able to find a couple of replacement parts and it's still brewing up perfect cups of coffee every single day.

I've been researching our favorite coffee maker and am filling this page with everything I can find out about it including where you can find parts and also the instruction manual (I found mine!). And PLEASE say hello in the guestbook. We are kindred spirits!

In a Hurry? Want to know the new mill and brew favorite? Here it is...

Since the old Melitta favorite is no longer available...no machine, no parts, no nothing...so here ya go... 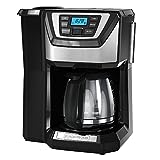 BLACK+DECKER 12-Cup Mill and Brew Coffeemaker, Black, CM5000B
Devoted fans of the original Melitta Mill and Brew have overwhelmingly chosen this as a replacement coffeemaker. Yes, it mills AND brews your coffee just like the Melitta. Actual comments, "I found a perfect replacement!...We could not be happier with our purchase...Just like the Melitta...We are going to purchase a 2nd one for backup before it is discontinued."
Buy Now

Why did you stop making the

Mill and Brew? It was the

best coffee maker ever made...

and you stopped making it!

When I chose my Melita Coffee Maker, I never dreamed I was picking out what would be a coffee maker worthy of the Coffee Hall of Fame. Through some research, I've found that there are approximately 3600 ongoing searches per month for this out-of-production coffee maker in the United States alone. Some of these searches are for replacement parts and some are from devoted fans hoping to find a straggler machine available somewhere online (scroll down if this is you).

This whole thing still puzzles me. Competition in any marketplace is tough! Why would a product so well loved, well made and in demand no longer be manufactured? I called Melitta to ask them. What I was told was that this machine is no longer in production and Melitta didn't replace it with another mill and brew. The kind lady I spoke with well aware of the interest in the old mill and brew model but reiterated Melitta would NOT be making this model again.

This makes absolutely no sense to me (and I told them so) since it was so very popular. Why have they not offered another mill and brew? The nice lady I spoke with could only offer replacement parts (scroll down for those too).

What color is your Mill and Brew? - Mine is white

If you own a Melitta Mill and Brew, what color is it?

Where to buy replacement parts for Melitta Mill and Brew

Update: Parts are no longer available

**Update: According to many devoted fans who have attempted to get replacement parts, Melitta is simple sold out. Forever :(. So disregard the following info (but I'll leave it up for those interested).**

For the top lid, (not the little one over the water reservoir, I'm talking about the big one that the latch breaks on) Melitta will send you FREE OF CHARGE a replacement cover/lid. But they only have it in white (who cares?). Call them at 1-888-MELITTA (1-888-635-4882) to get yours FREE!!! They don't even charge shipping.

*See update below about this* The other good news is that you can buy a replacement filter for your machine. These come in and out of availability so call to check stock. They are about $7.00 each + shipping, but you can only order 2 per customer (it's almost like the are black market items :-). It's only the filter, this does not include the cover over the filter, so save your old one of those. Oh, and you can't order them from the website, you have to call 1-888-MELITTA.

Update: A visitor to this page, MH in Utah, has learned that Melitta NO LONGER HAS THE BASKETS (4/30/2012)! Oh nooooo. I remember this happening in the past - they ran out, BUT got more in stock later so I hope that is the case again.

These 2 items might put your Melitta Mill and Brew coffee pot back in business for a while - it did for me! Had to share the new info. OK, carry on.

Don't buy one from eBay - I'm sharing mine!

I've just come across the instruction manual for my Mill and Brew machine (MEMB1W, MEMB1B & MEMB1WCAN). Here's a copy of the front of it. I wanted to offer to send any info from it if any other owners of this machine have lost theirs. The clock and auto set up feature are programmable so instructions may be needed.

I've just added links to scans of the manual here:

It's in two languages, English and French. There are diagrams of each part of the machine, info on how to set the clock, brewing instructions, programming the mill and programming the timer to make coffee later.

I've seen these for sale at Ebay if you can believe that!

How much did you pay for your machine? - If you don't mind me asking. Here's what I paid for mine...

I'll go ahead and tell you I bought mine on clearance at a Target store in South Carolina. It had been $50 and was on clearance for $25. If I had known what I was about to purchase, I would have bought every single one of them! That was about 9 years ago.

The prices I've listed go up to $200. Yes, these machines (I've found several on ebay - scroll down for listings) do sell for $200 these days. If I had the extra cash, I'd pick one up myself!

What did you pay for your Mill and Brew?

Here's an Idea for Fixing the Lid

*If you can't get a replacement*

Here's an idea from Steve who writes, "Hope this inspires more of your "millnbrewers" to keep them running. Its a brass hook and eye with small threaded screws and nuts on the inside. The plastic is very easy to drill. This has held up for over three years with no signs of wear." Thanks Steve!

If you OWN a Melitta Mill and Brew, talk about it here. Go ahead. We are all like minded about our favorite machine. Brag a little. Tell how long you've had your machine. Or sound off about why Melitta should start making them again.

Getting from Whole Bean to Ground Coffee

All cups of coffee start from a whole coffee bean. You can actually use any of these with your Melitta Mill and Brew, but what makes it so special is you can skip straight to step 4 for the very best cup.

Option 1: Pre-Ground - You purchase your coffee already ground from the manufacturer.

Option 2: In-Store Grinding - You buy a bag of whole beans at the store and use the in-store grinder. With this option you grind the whole bag at once.

Option 3: At-Home Coffee Grinder You have 2 small appliances to accomplish the job. You grind your coffee beans in portions in a coffee grinder and then add the grounds to the coffee pot and brew as usual.

Option #4: Combination Grind and Brew Coffee Maker - You have a grind and brew coffee maker that grinds the whole beans and also brews the coffee all in one machine.

Which of these methods do you use? Tell me in the poll below.

Please participate in this quick poll - All about YOUR coffee

How do you get from whole bean to ground coffee at your house?

It's Your Turn to Chime In - How long have you had your machine?