Pine trees and pine cones in our backyard

A recent stroll in our garden made me discover the world of pine cones peeking out of pine needles in the trees--tiny pine cones to very large ones. What are pine cones for? Can you tell the difference between a male and female pine cone?

Let me introduce you to some of these pine cones in our yard and the pine trees that made them what they are.

All photos were taken by Bakerwoman (that's me). All rights reserved.

The Tanyosho Pine ( pinus densiflora 'Umbraculifera') is often sold as Japanese Umbrella Pine or Table Top Pine. Like all pines, the Umbrella pine is monoecius, meaning it has both male and female cones on the same tree. This prolific tree bears small female cones about 1 1/2"-2" long which stay on the branches even after the scales have spread and the seeds have fallen.

This Tanyosho pine (Pinus densiflora 'Umbraculifera') has new candles with golden male pollen cones and tipped with pink female cones (that will become the pine cones). Male cones live only a few weeks. Each tiny scale of the male cone has a pollen sac which produces pollen grains. Each pollen grain contains a sperm cell and when the pollen is released, the male cone dies and disentegrates. Pollen is carried by the wind upwards and lands between the open scales of the female cones.

This photo shows the male green candles and female cones on the Tanyosho pine. The female cone lives for many years. These start off as soft green sticky pine cones and then mature into brown woody cones. Under the hard brown scales are conifer seeds which will take a couple of years to mature. The female pine cones scales will open up allowing the seeds to fall and the wind will spread the seeds.

A favorite home schooling nature book with a story

Pocketful of Pinecones: Nature Study With the Gentle Art of Learning : A Story for Mother Culture
Cleverly written as a mother's diary with more than 100 references on what to look for in a nature walk and woven into a story.
Buy Now

The longest pine cone comes from the Sugar Pine, whose cones can be up to 2 feet long,

Interesting pine cone links you do not want to miss

Why do these Canary Island male pollen pine cones remind me of Hawaiian dancers? The Canary Island Pine is native to the Canary Islands (part of Spain) but located off the northwestern coast of Africa. The long pine needles were used to pack bananas for shipment.

Canary Island pine needles begin to grow out of the top of the male pine cones.

The state flower of Maine is the White Pine Cone and Tassel.

The heaviest pine cone in the world is the Coulter pine cone, which can weigh up to 4.54kg.

The Gray pine, Foothill, or Ghost) pine (Pinus sabiniana) receives its name from the droopy distinctive stiff blue-grey needles which stand ghostly pale against the Mission Peak foothills. The name Ghost pine refers to its airy appearance and wispy foliage. The needles are in bundles of threes and are 8-12 inches long.

The Gray pine is known for its very large and heavy female cones which range from 6-13 inches and have hook-like spurs.The cones were collected and harvested by the Native American Indian Tribes who would dig around the base of the trees for roots and the hardshelled seeds or pine nuts and were referred to as "Diggers" by the white settlers, hence the name Digger Pine. But this common name is considered disrespectful and derogatory to California's Native Americans and the terms "gray pine or foothill pine are now officially preferred.

The Cone-bearing Trees of Yosemite (1939) by James E. Cole

One way to identify a pine tree is to count the number of needles in a bundle. The Gray pine shown here is three-needled fascicled.

Identifying pine trees by the number of needles

Can you tell a pine from a fir tree?

Find out the difference between a pine and a fir tree

Heavy and solid as a rock

Huge Gray pine cone laden with sticky sap exhibits talon-like upturned tips called spurs. It weighed about 3 pounds. I originally mistook this monster pine cone for a Coulter pine cone. Both are contenders for the heavyweight champion of the pine cone world.

Difference between the Gray Pine and Coulter Pine cones

Why is this garden gnome smiling? - You would too if the huge falling Gray pine cone missed your head

You would not find a picnic table under a Gray pine tree. Each cone weighs several pounds and could cause injuries. Fortunately, this large Gray pine cone fell on my flowerbed where shrubs softened its fall.

Standing on our backyard deck, I managed to photograph this crow with a tasty pine seed on its beak. Notice how small the crow seems next to these large cones.

DIfferent types of pine nuts that we eat

How to Collect Pine Nuts

Can you see the pine cone nuts peeking out under the scales?

Gray pine cone nuts are about the size of almonds.

The knobcob pine is extremely hard--it relies on the heat of a wildfire to force it to open and release its seeds.

This gracefully arched Japanese Black Pine Pinus thunbergii shows off its orange-yellow male pollen cones. It has been shaped to look like a bonsai to give our frontyard a Japanese garden look.

Male pine cones generally grow in clusters at the tips of lower pine branches and are herbaceous or nonwoody. The main function of the male pine cones is to produce large quantities of pollen. On each scale of the male cone is a pollen sac where pollen grains are formed. Each pollen grain is a protective container of a sperm cell. When the pollen is mature, it will be released into the air and carried by the wind to land on between the scales of female cones and fertilise the ovules. The male pine cone then falls apart and dies.

The Blue Atlas Cedar (Cedrus Atlantica Glauca) stands tall in our backyard living up to its name with striking ice-blue hues. Elongated male pollen cones which resemble fuzzy caterpillars appear to be swarming on the stiff needles.

The Blue Atlas Cedar tree is also known the President's Tree after it was planted in honor of a visiting President at the Stanford University Campus, in California. The tree is located in the lawn at the front of the Hoover Tower.

Golden Korean Fir Abies Koreana 'Aurea' 2 - Year Graft
Be the first in your neighborhood to display this stunning fir tree with drooping two-tone needles - yellow on one side and silver-white on the other. The purple-blue cones are a wonder of nature and the envy of your friends.
Buy Now

The tiny cones (1" to 1 1/2" diameter) of the Scots pine (Pinus sylvestri L.) litter my backyard and I collect these in terra cotta pots. The Scots Pine tree which has an orange-reddish trunk is native to Europe and Asia.

Scales are dry and open

They are small female pine cones which I picked up from the ground in my backyard. These are 1/2"-1 1/2" long and are useful for crafts and home decor.

Scales closed up after the rain

Believe it or not, this is the same pot of pine cones as the one above after a rainstorm. The woody scales of the wet pine cones closed up, shrinking the cones into narrower shapes and making the pot appear less full.

This photo was taken early Spring 2012 and traces of the pink cherry blossom petals interspersed with the small cones are apparent.

Decorating with pine cones has never been easier.

There are simpler ways to add pizazz to table settings with pine cones.

Pine cones add a rustic touch to indoors - just stack them on a bowl on a coffee table with a few drops of essential oils.

Can be reused year after year

These cones-on-sticks are so versatile because these can be combined with any flowers for the holidays-- be it Thanksgiving, Christmas, Autumn and Fall. There is a different look for every season or occasion.

These pumpkin-colored mums with lime-green centers make a statement with the addition of the pine cones-on-a-stick. Autumn is here and these pine cones gathered from the ground were just repurposed to add a welcoming cheer to our entryway. Now that was not difficult to do at all.

This pot of mums will end up in a patio container after the holidays are over.

What could be cooler than small pine cones dancing with ice cubes in an ice bucket? 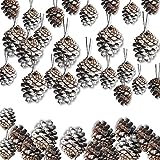 Jeffrey pine is called the "gentle Jeffrey" because the sharp points on the scales are turned inward and thus it is not prickly to handle.

What would you do with pine cones? - Share some of your ideas and thanks for visting.