Rococo vs. Baroque in Interior Design

The Rococo movement evolved from the Baroque. In fact the word Rococo is actually thought to be a combination of two words; rocaille which refers to the French love of arranging stone gardens in the shape of seashells and the italian barocco which means Baroque. Although it combined many elements of the former era it was still distinctly its own.

The Baroque period displayed a grandeur that was tactfully developed to exploit the differences between commoners and royalty. It was also fashioned to remind everyone that God and the church were all powerful. And since its goal was to impress rather than be enjoyed structures were built with little thought as to how people would interact with them. Commoners were basically meant to stand or sit on the floor and be awed by their opulent surroundings. A chair was thought of more as a status and wealth symbol than a pleasant place to rest one's body; likewise with the house whose artful beauty was more allegorical than comfortable. And while the designs of the Baroque conveyed a sense of movement and exuberance that the Rococo era embraced, refined and exploited, the former period focused mainly on living a pious life with the intention of enjoying oneself in the afterlife. The Rococo era on the other hand, was a jubilant celebration of carnal life.

François Boucher (1703-1770) was an artist that typified the Rococo style of idyllic and tranquil scenes imbued with an open eroticism. This painting of Louis O'Murphy, King Louis XV's mistress, displays the level of physical comfort that people of the Rococo era enjoyed. The couch is abundantly upholstered in what looks like damask, a downy pillow of satin supports her leg and draping thick curtains add a feeling of opulence and luxury. The couch also has carved rocaille, cabriole legs and whimsical curves typical of the period. 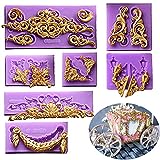 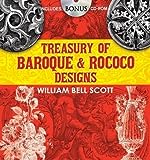 The baroque interior above is little more than a beautiful shell.  It’s painted in the typical deep shade of red with heavy gilded stucco work that encases paintings and frescoes.  The furniture seems merely for show and in comparison to Rococo furniture is heavy.

Baroque interiors were thought of as extensions to the overall architecture of the structure. They were designed by the architects who directed the various artists who were employed to paint or sculpt interior features and little thought was given to how furniture would affect the overall impression. Rococo interior style was developed by craftspeople and designers rather than architects.

The Rococo era schematically utilized the concept of interior design. Furniture and interior were regarded as one element meant to harmonize and create a unified effect. In fact, often furniture was custom made; specifically created to compliment interior embellishments such as panelling. Great fore-thought was given to the placement of furniture and often the shape of a chest, mirror or console would be framed out in stucco or wood carving on the wall. In addition the decorative features of the furniture would mimic the architectural decorations creating an integrated result.

Both eras are often described as exuberant because designs displayed a sense of joy and movement. However, Baroque designs employed symmetry and were heavy with dark colors and deeply carved embellishments. In comparison the designs of the Rococo used pastel colors and asymmetry to create a light flowing effect.

Design for Ornament, Plate 17 designed by Jacques de Lajoue (1687-1761) and etched by Gabriel Huquier (1695-1772). Often these designs of ornamentation and rocille were copied onto walls and furniture. These sweeping styles were day to Baroque’s night.

New types of rooms were developed such as the boudoir which reflected the growing social importance of women. At the same time rooms that catered to life's pleasures such as drawing, game, music and reading rooms also became more widespread and supported the pursuit of frivolity that was so admired during the Rococo period.Growing merchant and aristocratic classes played a large part in shaping the direction of the Rococo era. More and more people could afford the luxuries previously reserved only for royalty (although the style was still only accessible to the rich). Since their lifestyles were much less formal they demanded furniture and interiors that complimented their situation. This called for a paring down. Furniture became lighter, smaller and more curvaceous. Cabriole legs on chairs, chests and tables made their first appearance. Comfort became significant as evidenced by pervasive use of upholstery. Many new types of chairs such as the chaise lounge, that reflected a greater demand for comfort and an increased interest in intimate conversations were developed. Tables too, changed in various ways. For example, cross-stretchers became obsolete and baluster and pedestal legs were superseded by S-curved and cabriole legs. The mirror which had been important to the Baroque interior became paramount. Mirror frames were not restricted in the same way that furniture frames where which allowed makers a much greater creative freedom. Because of this new trends were often first reflected here.

Furniture
This invaluable book is an absolute must for the serious design enthusiast. If you're interested in learning more not just about Baroque and Roccoco Design but all sorts of furniture styles from classical to contemporary then Judith Miller's book on FURNITURE is the difinitive resource. It's a treasure trove of information and inspiration.
Buy Now

Mirror by English Designer Thomas Johnson (1714-1778) who is especially known for his mixture of styles combining rococo, Chinese and rustic motifs; all displayed beautifully in this stunning mirror whose asymmetrical curves practically drip with organic embellishments.

Whereas the Baroque received most of its influences from previous eras within Europe, during the Rococo period trade with the far east had increased and greatly influenced decorative motifs. Oriental patterns and lacquerwork became increasingly fashionable throughout the period.

The greatest changes from the Baroque to the Rococo eras took place indoors. Structures continued to be built externally in the Baroque style with not much more than cosmetic updates. However, interiors were dedicated to the people who lived in them and their enjoyment. The inhabitants were still set on impressing visitors but more subtly which lent interiors an air of refinement that was missing during the Baroque period.

I found the architecture and especially the sculpture of the Baroque era exquisitely beautiful. I was particularly impressed with Baroque sculptors such as Bernini whose statues seemed to practically breathe with life. However, I love the creativity and freedom that was implied in Rococo forms. And I can’t deny that I like so many other people, found rococo style upped the anti in terms of livability and refinement. With just a few modern tweaks one could easily slip in to the life of an eighteenth century aristocrat. In aesthetic terms it was a magnificent era for craftspeople and self-indulgence. Speaking strictly from a visual standpoint, I think Oscar Wilde said it best, “Moderation is a fatal thing. Nothing succeeds like excess.”

If You Enjoyed This Hub You Might Also Enjoy...

The Baroque Era: The Age of Exuberance