Being a great lover of coffee probably the only thing I do as often in the day as boil the kettle is drink coffee, so a kettle that is easy to use and boils water quickly with the minimum of fuss is an important asset to me; and the cordless Russell Hobbs jug kettles do just that.

I've used kettles all my life and although boiling water may seem a trivial task when you use the kettle as much as I do you come to appreciate a cool machine when you see one; a kettle that is easy to fill and pour from, and just gets on with doing its thing of boiling water without taking too long and with the minimum of fuss is a kettle worthy of praise. 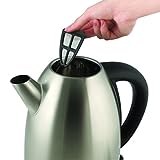 The main operating features and design for the Russell Hobbs kettle jug we own and love are described below followed by graphical representation in the image gallery:-

The pouring spout is fitted with a useful filter, which if you haven't given your kettle a quick clean for a while, prevents bits of limescale from slipping into you cup of tea or mug of coffee. Unlike the old kettles these jug kettles don't have exposed elements to fur up (which are then difficult to clean) the inside base is a smooth flat metal surface so the build-up of limescale is less acute and the occasional light clean with a mild solution of descaler is all that's needed to keep it clean.

I prefer to fill from the spout, it's easier and quicker; but some people I know insist on opening the lid to add the water, which is fine and on the Russell Hobbs is almost as easy because of the comfortable soft touch release button and the ease at which the lid snaps back into position afterwards.

So if you're looking for a great kettle then you can't go far wrong with a Russell Hobbs.

A Trade Name of Distinction

The kettle reviewed in this article is an old model and currently not available. However, Russell Hobbs does other great jug kettles; and they are a Trade Name you can trust. Not only do they do great kettles but they also do other great kitchen appliances such as their coffee maker, shown below.

All Quality Goods for a good price giving you value for money. 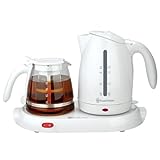 Russell Hobbs RHTT9W 1.7-Liter Electric Kettle with Keep Warm Tea Tray and 1-1/2-Liter Glass Tea Pot
It doesn’t have the alarm clock to automatically wake you up to a piping hot cup of tea in the mornings, but it’s the next best thing; and in many ways more versatile in that the tray (with handles) is portable so it can easily be used anywhere around the home.
Buy Now

Variation on the Teasmade

A great idea of a kettle heated up by a keep warm tray with handles that also keeps your drink hot in the accompanying glass tea pot.

This handy companion set, in many ways not too dissimilar to the teasmade has many uses around the house for a refreshing hot drink in the bedroom in the mornings (especially for a lay in on weekends) and for example a long movie on the telly or DVD. And if like me you prefer coffee then I see no reason why you couldn’t put the coffee and milk in the tea pot instead of tea.

Kettles Through the Ages

A Brief History on the Evolution of Kettles

In time immemorial water was boiled in a pot on an open wood burning fire; long gone are those days unless you happen to be on a ‘back to basics’ camping holiday. And the days of boiling water on an open coal fires range or stove is long since gone but I do remember a time when it was common to boil kettles on a gas ring and the rather memorable whistle they made as they came to boil. Since then the only time we’ve boiled a kettle on gas was on a camping ring when on holiday travelling; although since then we’ve stumbled across a make of flask that, doesn’t cost the earth to buy and actually keeps the water hot all day.

My first experiences of kettles are the old metal ones that you had to fill almost full in order to protect the heating element so that it wouldn’t burn out. These kettles plugged straight into the mains so in order to fill them you had to first unplug them, take the lid off, put the kettle under the tap, and then after putting the lid back on, plug it back into the mains and turn it on. Then you had to wait ages for it to boil a kettle full of water when all you wanted was just a couple of cups. The lids on these kettles were always fiddly to get off, you had to wait ages for it to boil and the heating element would invariably fur up so it would require regular descaling.

Therefore the first appearance of jug kettles seemed like a leap forward in technology. They were lighter and easier to fill with water, and you just put in the water needed e.g. one or two mugs. Less water meant they boiled a lot quicker and used a lot less of your electricity. These early kettle jugs also had a little red ball that bobbed up and down in a small tube on the side to indicate water level; except after a while the red marker would cease to work once the tube became clogged with lime scale. They were still attached to the mains by a power lead and had to be unplugged each time you wanted to top up the kettle with more water.

These issues were in time resolved when kettles became cordless and when viewing windows were added to the side of the kettle so you could see directly how much water was actually in the kettle. Then with a few more modifications you get the kettle jug with large viewing areas on the side of the jug so that you can easily see at a glance how much water’s in the kettle; and the power base got even better with the electrical contact now being high and dry and well insulated (to prevent accidental shock) and being situated in the centre of the base surrounded by good sloping sides to any risk of electricity and water coming into contact makes it as safe as any corded kettle; if not safer.

When our old kettle died, after many years of hard labour, I did a lot of research on the internet to find a fitting replacement. After many hours of research I came to the conclusion that the most suitable kettle on the market for us was the Russell Hobbs cordless kettle.

Hence we now the proud owners of the Russell Hobbs cordless kettle which we are making full use of on a daily basis.

Topping up Your Kettle: Spout vs Lid

How Do You Fill Your Kettle?

This rather apt Victorian newspaper article was saved by my great-great grandfather, George Burgess (1829-1905) in his scrapbook