I love to write and to share my knowledge, and like to think that my reviews will help people trying to decide whether to buy or not to buy

What do you do in an emergency, when the power suddenly goes off, and all the lights go out?

Look for a torch, of course!

I bought my wind-up torch in London a few years ago, when they were new on the market. I was fascinated with the idea that you could actually get a torch which didn't need batteries and, even in the shop, I could already see the possibilities, because nearly every time I've needed a torch in an emergency, it had a flat battery - but not with this one, which worked by a dynamo which just had to be wound up.

This torch is always good in an emergency, because it always works - no worries about dead batteries just when you need your torch most

I bought one, took it home to try, and was so impressed that I went back to the shop the very next day, and bought one for each of my grandchildren for Christmas, and an extra spare for myself, so that I could keep one in the car and one in the cupboard under the stairs, in case of a power failure.

The children were all delighted with their presents, especially after I explained to them that they could take their torch with them when they go camping, and didn't need to worry about getting flat batteries, or replacing the battery. That was a great plus, just for novelty value, never mind the convenience.

The handle has a little pull-out knob, which makes it easy to wind up the torch, and all you have to do to get a very bright light is to wind up the dynamo by giving a few turns on the handle, and then rewinding when the light grows weaker.So it's a great money-saver as well. I have found it very hard-wearing as well - I still have my two wind-up torches working after eleven years - not bad, eh? 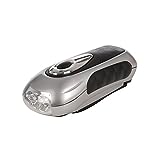 This is what it's like when there's a big power outage:

And This is Why You Need to be Prepared -

Nothing fancy, just a torch that doesn't need batteries

Have you ever been caught without a torch when you needed one?

More of my Gadget Reviews: