This Lense will help you make an informed decision on which steam shower is the best for you. We have done reviews on some of the top brands as well as shopped around and talked with many sales staffs to ensure the best possible review for each unit. Buying a steam shower is a major investment, I hope you find this article helpful in your buying process. We would like to thank the Steam Shower Guru for his help in finding information to make this Hub Page possible, without their input and knowledge it would have been virtually impossible to find the information needed to make this possible.

The Overall Best We Could Find

When we started our research on the modular steam shower industry one company stood out immediately, Oasis. There was an overwhelming amount of positive press on this brand of steam shower and we found it strange that only one company was carrying them. After contacting Bathroomgetaways.com to find out why they were the only company carrying Oasis steam showers, we were put in contact with the owner of the company and his explanation was. "Oasis steam showers are our personal brand. We have over 12 years combined experience in the industry and the Oasis brand is the result of this". By this point we had done our research and were absolutley amazed at how up front the staff at bathroomgetaways was. We called several times seeing if we would get conflicting information like many other E-stores that would switch their stories once we confronted about certain sales tactics. Bathroomgetaways.com was also nice enough to inform us on the positive and negative sides of the competitions products. Besides the customer service, Oasis steam showers are the best brand because they use a sealed panel construction. This eliminates the spontaneous glass breakage that you will find with other cheaper lower quality steam shower manufacturers. Overall The Oasis Platinum line of showers are light years ahead of the competition in terms of quality control and design.

A shower demonstration of the Oasis OS-324F3 Steam Shower

Ariel steam showers are one of the pioneers of the modular steam shower industry. They have been around for about 10 years and have a vast dealer network. When thinking of purchasing an Ariel steam enclosure its best to make call around and talk to several companies to feel out which ones will give the best after sale and technical support. This will ensure that you get the service you deserve if there ever is an issue with your steam room.

Here are a few Ariel steam showers that can be purchased on Amazon. We recommend buying through amazon instead of Ebay or other websites because you get the full backing and support of Amazon. There are countless horror stories on the internet about these showers and unscrupulous dealers who all claim to be the importer of the product. By purchasing on amazon you are guaranteed to get the best service and coverage possible along with a better warranty. 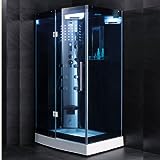 Aquapuetics is also a well known brand of steam shower that has been around for some time. Overall they have decent pricing and offer a 3 year warranty on their products. We were unable to track down any reviews on the Aquapeutics but did notice some of their steam shower models were not ETL certified. ETL certification is an important for building inspectors for large remodeling jobs and new construction. Its important to check to see if the unit you are buying is ETL certified and also to confirm will be satisfactory with your building inspector.

A shower video of an Aquapeutic Steam Shower in Action

Royal Steam showers were very popular in 2007-2008 but lost their ETL certification. Beware purchasing a Royal steam shower as there are many distributors using old certifications and stating that they are certified. You will often hear that they are manufacturered in Germany which is not the case. Although Royal has some uniques designs overall the technology that is used in them is out of date. Reputable dealers stopped carrying them because of problems with the control system and also the steam generators did not hold up well with the different types of water in North America.