Credit Cards - Do You Have Too Many?

Anyone Can Fall Into Their Trap

Let me take just a moment and give you a little history on myself. I recently worked for a very reputable debt settlement company for about 8 years. (I am now retired.) I have talked to thousands, yes thousands of people who are in debt of anywhere from as little as $5,000. and up to more than $100,000.00. in just credit cards. I have helped an array of struggling people from doctors and teachers, police and fireman, blue-collar workers, preachers and college students. Anyone can fall in to the credit card trap. I no longer have anything to do with any type of debt-company. I am here to give you some information to help keep you from becoming one of those people who are going to need outside help because of the credit card traps!

Keep a Credit Card for Emergencies

Now, let me say that if you are one of those people who only have one to two credit cards are you are able to pay off the balance within three to four months, good for you! I am not saying that you shouldn’t have a credit card for emergencies. I am not saying that you should either. I have one business credit card. It is strickly for purchasing products for our business and I pay it off completely the weekend after I used it. Other than this one, I haven’t had a credit card in about 8 years. If I can’t pay cash for it, I don’t buy it. If it is something I really need and I don’t have the money for it, I can borrow the money at the bank for a good interest rate that I know is not going to go up for some unknown reason.

Credit card companies have brain washed most of us into actually believing that they are doing us a favor by letting us have their credit card. Remember, the card companies are in business to make money, not give it away. Where is that money going to come from? Someone has to be paying interest and most people are paying more than 12%. Some people are paying as much as 29.9% and think there is nothing they can do about it, but pay it!

Fueling Up on Credit

The credit card trap is intentional. The credit card companies are hoping that you are going to use their card often and run up a high balance on it. That is why they want you to use it to buy your groceries and gas. They are going to offer you 0% interest or 2% interest as an introductory rate. Sounds good right? Most of the time, the introductory rate is good for 6 months to a year. At that time the interest rates is going to go up. Usually the rate will go to 9.9%, if you have made your payment each month on time. Now you are paying them 110% for what you haven’t paid off yet.

But they were on sale!

No One is Perfect

Now, what if something happens and you make just one payment just one day late! Believe me, no one is perfect! Haven’t you ever made a payment on something just 1 day late? Maybe it was the electric bill or the water bill; maybe it was the car payment. Did the company double or triple your payments because you were one day late? The credit card companies will. What do you do then? Now that $50.00 pair of shoes that you just had to have actually cost you somewhere around $100.00 to $150.00 or more! I have actually talked to people that will let their mortgage payment get behind to pay their credit card bill on time! It’s because they know what will happen if they don’t.

What if You Lost Your Income?

There are people out there that may make upwards of $200,000. yearly, but have 5, 6 even 10 or more credit cards! Why use credit cards if you don’t need to. Now, life happens, we know who many people have lost their jobs over the last several years. What if it were you or your spouse? Maybe there is an illness in the family and one of you are no longer able to work. Now you are trying to live on half of what you were making before. I would say that at least 90% of the people I spoke with concerning their credit card debt, were in trouble because one of the income earners in their household lost their job. How many people do you know that have been downsized?

Most of us, no matter how much money we make, still live paycheck to paycheck. The more money we make, the better a house we buy or the better a car we drive. With the economy the way it is, can you honestly say, without a doubt, that you will have a job 6 months from now? Most of the people, who have been downsized, did not see it coming. Most people have enough put back that they can live on it for about 3 months. How much money do you put into a savings account or retirement account each month? Believe me, retirement age gets here much quicker than you realize. What about paying for college for your kids? Can you afford to take the risk of falling into the credit card trap?

Unfortunately, we have become a spoiled society and we want, what we want, and we want it now. We don't want to wait until we have saved enough money to buy it. I am not going to say that you should not have a credit card to use for an emergency. If you feel that you have to have one, put it up somewhere, don't ever carry it with you. They are just too easy to use. I have had to help people that have already had to do a debt settlement program once and then fell into the trap for a second time! Now we are not talking about a VISA or Master Card debit card. With a debit card, you have the money in the bank, that is where the funds are being debited from. I try to put 10% of my monthly income into a savings account each month. Then if an emergency arises, I have it covered. If there is something I really want, I can pay cash for it. If it is a large purchase, I can borrow the money at the bank at a good interest rate and not worry about them doubling or tripling my payments.

Everyone has good intentions when they get a credit card. They are going to use it for emergencies only or they are going to pay it off and the end of each month. Some people can, but they are very rare. If you have the money to pay it off every month, why use it, pay cash for your purchase. Some people think that they have to have a credit card to improve their credit score. Not true! You have a mortgage or a rent payment. You probably own or lease at least one if not two cars. You have a credit history. You don't need to have a credit card to improve your credit score. Remember, my husband and myself have not had a credit card for 8 years. We have excellent credit. Don't run the risk of falling into the credit card trap. I have told my children many times, learn from other peoples mistakes, don't wait to make those same mistakes yourselves.

How many credit cards do you have?

I hope I have given you some information that you will at least think about the next time you start to pull out that credit card.

Learn More About How to Get Out of Debt 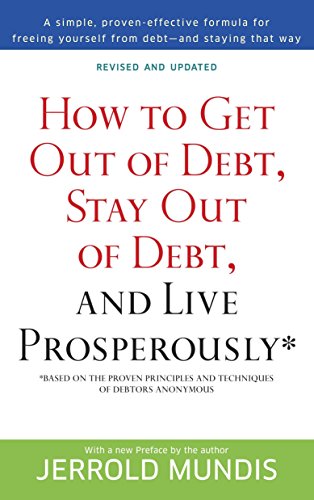 How to Get Out of Debt, Stay Out of Debt, and Live Prosperously*: Based on the Proven Principles and Techniques of Debtors Anonymous
Buy Now