Rechargeable Batteries For Wii Remotes - Save Money On Batteries

I enjoy playing games on my Wii often, whether it's Super Mario Galaxy 1 or 2, The Legend of Zelda: Twilight Princess, or just playing Wii Fit. One thing that I hated though is having to keep a supply of AA sized batteries on hand to swap in when the ones in my Wii Remotes and Balance Board were exhausted. Sure, you can buy the jumbo packs of name brand batteries, or you can go cheap and buy the even larger packs of off-brand batteries, but all the same, you'll still end up throwing them away when they're used up and buying more. 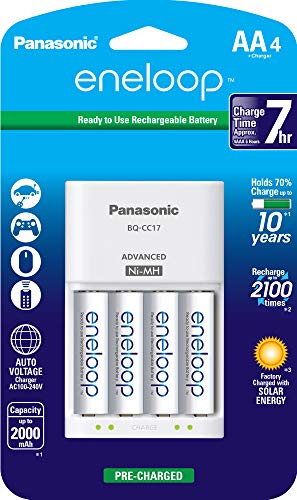 Rechargeable Batteries Are A Great Alternative For Wii Remotes

Perhaps the cheapest, most versatile solution is to buy a battery charger and a package of rechargeable AA sized batteries. They will work with not only the Wii remotes and Balance Board, but they can also be used in just about anything else that runs on AA batteries, like flashlights, toys and such. You don't have to buy an expensive battery charger. The least expensive ones typically charge batteries at a steady rate and its up to someone to take the batteries off after enough time has passed that the battery, assuming it was flat empty, should then be full. Smart chargers employ different methods to monitor the charging of batteries and make things easier, since they stop charging the batteries when they are detected as being full, that way you don't have to wait around or remember to take them off of charge, which is better for the life of the batteries.

When considering the different NiMH batteries available for purchase online and in stores, you'll come across many different brands that come in varying capacities, measured in milli-Amp hours, or abbreviated mAh for short. For example, most double AA batteries are rated somewhere in the 2000mAh capacity or higher. Basically, the higher the capacity, the longer you can go in between recharges, just bear in mind that a bigger battery, just like a bigger gas tank, takes longer to fill up so to speak.

Make Your Batteries Last Longer In Your Wiimote

Here's a helpful tip, regardless of what kind of batteries you're using, disposable or rechargeable. If you hit the Home button on your Wiimote and click on the Wiimote settings, you can make your batteries last a lot longer by turning off the rumble feature and decreasing the volume on the built-in speaker on the remote. For some games, the rumble feature is necessary, or makes the game more enjoyable, but if you don't particularly need the rumble feature, you can turn it off to get more play time out of your batteries. 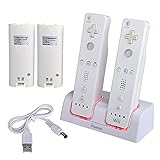 One alternative if you like simplicity and convenience would be to purchase one the many after-market rechargeable battery packs and charger bases designed to fit WiiMotes. I myself purchased a charger base with two battery packs that are branded as Insten, which seems to be a generic Chinese brand available on eBay. The base itself can be plugged into either any available USB outlet, say for example, on the back of the Wii, or a USB wall adapter. The battery packs take the place of the original remote covers and snap in with the built-in batteries making contact with the pad and spring in the bottom half of the WiiMote's battery bay, and include a hole so that the Sync button may be pressed with a pin.

My particular battery packs weren't perfect, as the hole in the rear to allow access to the Sync button was square on the inside of the battery pack and actually rested on top of the Sync button so that if you squeezed the back of the WiiMote, it would actually send it into pairing mode in the middle of a game, which was extremely frustrating. This was a quick fix, and just took at most 2-3 minutes for me to find my drill and drill bit set, grab a 9/64” drill bit and run it through the Sync button access port on the battery packs to round out the squared end so that it wasn't making contact with the button anymore. Voila, a no cost fix to resolve a poor product design flaw.

Battery life is also something of a guessing game with third party battery packs, with a lot of the ones sold from China claiming a capacity of 2800mAh, which doesn't seem to be anywhere close to the actual capacity. My own is rated for 2800mAh, but in a day, I can get anywhere from 4-6 hours worth of use before I need to put it back on the base to charge. In my opinion, for the cost of these cheap battery pack and charger combos, they have enough capacity for most casual adult gamers and can still save you a fortune compared to buying AA batteries constantly.

Of course, much better quality battery packs would be advisable if you're looking for something like this for younger kids who may play games on the Wii often and for great lengths of time. With kids in mind, you want something that's built a bit more solidly than the cheaper battery pack and chargers out there, so it may not be a bad idea to read a few reviews from the various options available from somewhere such as Amazon to see what issues users commonly have with a particular model or brand.

For Wii Fit Balance Board users, there are also after-market battery packs that snap in to replace the typical 4 AA batteries you'd have to keep in there. Some of the more ingenious ones I've come across allow you to install the battery pack, plug in the charger and still use the Balance Board at the same time without having to wait on it to completely recharge. If you or someone you know plays Wii Fit with the Balance Board often, a battery pack can save a great number of batteries and therefore money. 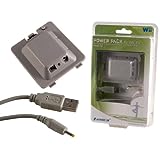