These days, when it comes to credit cards, black is all the rage.

For years now, American Express’ Centurion served as the exclusive and standard super-card (in fact, it remains so) for the wealthy and status-conscious.

With its striking, silver-grey and pitch black appointment, the titanium credit card made a heavy thud when placed on a nearby counter-top.

This never failed to turn all heads in the mega-man’s (or women’s) direction. The Amex was the prestigious credit card for the luxuriously rich.

In the credit card and marketing industry, most experienced analysts consider Visa's usurpation of the black card name to power its own marketing program as brilliant.

For years, it was the unofficial name of the Centurion, spoken about in hushed tones and envious, fluttering eyelids.

Now, it's better associated with Visa, and has made them billions. Nothing sells like the promise of prestige, and it can be donned by many products.

Did you know that original Black Card was the American Express Centurion? 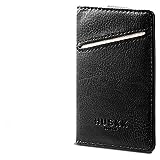 And then, suddenly, just a few years ago it was no longer the only one, insofar as very important appearances go.

Barclays Bank got the brilliant idea to capitalize on the hushed prestige held by the Centurion, and pole-vaulted off its back to form the Visa Black Card.

It further eschewed the traditional plastic composition in favor of something worth marketing – something like carbon-graphite.

The Black Visa Card was then offered – supposedly – to the top 1% of the continental American population, further heightening its supposed prestige by adding exclusivity to its list of “benefits”. Only credit card users with elite credit histories were supposed to be eligible.

Do you think there's anything wrong with wanting the finer things in life?

The real question, despite the obvious physical attractiveness of the black card, is what are the advantages of having one, above and beyond those of normal credit cards?

Visa Black gives its holders round-the-clock access to a concierge service intended to meet all the customers’ needs.

Hundreds of dollars of luggage insurance for those dog days when the Gucci bags are nowhere to be found in the airport luggage claim.

Additionally, high-end gifts from luxury brands such as Nordstrom’s, complimentary tickets to steakhouses and other very nice restaurants, access to over 600 airport lounges in over 90 countries worldwide, and a host of other somewhat standard amenities (insofar as lucury cards are concerned).

While the Visa Black is touted as luxury card, the genius is in the marketing, not in the actual abilities of the charge-card.

To see this, you need only compare what it offers to the champion black card of them all – the Amex Centurion.

You can’t even apply for the latter, which takes the definition of exclusivity to new heights. You’ve got to, at the very least; charge $250,000 per year – notice that reads “charge”; not “spend” – which would suggest that the holder of the Amex is quite capable of paying a one million dollar ransom for her abducted Shitzu.

The concierge service of the Visa Black has been quoted as “pretty good”, whereas the Amex Centurion has been known to plan weddings and plan trips to the moon for its celebrity card-holder. Granted, I don’t know if the latter is true, but that doesn’t mean it hasn’t happened secretly.

So, should the Visa Black be maligned or admired for launching its Black Card campaign off the mystique and prestige of its predecessor?

That probably depends on whether you work for Visa Black or Barclay’s bank, or are an unfortunate card-holder who was captivated by the tantalizing commercials starring a sexy and black-clad Donna Feldman.

In these, she is usually found taking a black helicopter to don black jet skis on a white boat (which I think should’ve been black).

If this was enough to coax you into paying Visa Black’s $495 annual fee despite being rather unable to afford it, well you know what they say: there's a sucker born every minute. Or is that every second....?

In short, before you apply for the privilege of paying $42 a month for prestige, status, self-congratulation, ask yourself if you’ve ever considered dropping $500 for a special dinner for two without experiencing shortness of breath.