Sometimes, in our crazy world, things happen that are so off-the-wall crazy that nobody would expect them to come from an organization with Intelligence in its very name. Granted, a few on the list below are less silly and much more diabolical, crazy still seems a fitting description.

Project Acoustic Kitty was a CIA run effort to listen in on the Kremlin and other Soviet operatives elsewhere in the 1960s. The project was the brainchild of the Directorate of Science and Technology.

Sounds alright so far, so where's the crazy, and what's with the name?

Project Acoustic Kitty was named such because the idea of the plot was to implant a small recording device into, yes, into, a cat and let it roam the area operatives were known to frequent. Take a second to absorb that. The CIA put a microphone in a cat. They bugged a cat and set it loose. This is too crazy to fail.

On the first mission, our super secret feline friend was to visit two men on a park bench outside of a Soviet embassy in Washington, D.C. According to accounts, the cat was released nearby and almost immediately the project was given a mighty slap upside the head by god; in the form of a taxicab. Yes the cat was unfortunately struck by the cab and the mission subsequently declared a failure. The project was cancelled in 1967 after a handful of further attempts also failed for various reasons.

Starting sometime in the 1950s, the CIA was studying the effects of Lysergic acid diethylamide, or LSD, and other substances. Testing took place in many areas, from San Francisco through New York. Seems legit so far, so where is the crazy?

Prostitutes, paid by the CIA, lured unsuspecting potential customers to the CIA safe houses where they were then unknowingly dosed with the substance being testing that day. CIA operatives then watched on from concealment and noted the effects.

On the bright side, some benefits were to be gained from these experiments, to include spawning further research on sexual blackmail, surveillance techniques and use of mind altering substances in other areas of CIA operation.

Again in the 1950s, the CIA had another very interesting operation going. In such, the CIA had operatives work their way into positions within the media. At first Mockingbird started with just a few magazines to see if they could influence material, and spread the CIA's viewpoint. After meeting some success in the project, it was expanded wildly.

In 1966 Ramparts Magazine ran an article exposing the program, showing the money trail to the world and spawning a congressional investigation. By the time it was finally shut down by Congress in the 70's, the influence was so expansive as to include several foreign media installments as well.

Project MKUltra was an expansive research endeavor delving into the realm of human behavior modification and mind control. The project was officially sanctioned in 1953 and was spread between 80 institutions, consisting mostly of schools and hospitals.

MKUltra engaged in many illegal activities, most notably testing drugs and mind control techniques with unknowing U.S. and Canadian citizens as the lab mice. The project was known for unorthodox processes including hypnosis, sexual and verbal abuse, sensory deprivation and even full blown torture. The program was official halted in 1973.

It is widely debated whether MKUltra was ever successful of bending one's will, but a few pages which were declassified tell chilling accounts of people doing things they would never do in their normal frame of mind. Unfortunately most documents were ordered destroyed when the program was closed, so we may never know.

Cuba had just come under communist rule under Fidel Castro. The U.S. Government was sweating, and Cuba's ties with Russia were becoming apparent. The high administration needed a way to get American citizens upset enough to allow military action to shut Cuba down before Russia got too involved and made it impossible. In comes Operation Northwoods.

In 1962 a series of proposals came from the Central Intelligence Agency and U.S. Department of Defense. These proposals were all plans for attacks carried out by the CIA and other secret U.S. organizations - on its own citizens.

Yes you read that right. The planned attacks, known as a "false flag event," would have injured and probably killed many U.S. citizens - on U.S. soil, with an attempt to point blame and drag the nations into a war. Wow. Fortunately the proposals were denied by President Kennedy and never carried out.

Speaking of Cuba, Operation Mongoose was another anti-communist platform run under the Kennedy Administration in the 1960s. The basic idea was to destabilize Cuba and remove Castro from power, to install a democratic government in his stead.

Many failed attempts to assassinate Fidel Castro were made and many more were proposed, as well as many schemes to discredit Castro. Most notably, a wile-e-coyote-like attempt was proposed, to replace one of his normal cigars with a real life exploding cigar. At one point Thallium salts were even put in his shoes so all hair on his body would fall out and cause embarrassment.

A later senate committee noted 8 separate failed assassination attempts by the CIA, with many more proposals that were never put into action. Fabian Escalante, Castro's personal head of security, makes claims of over 630 individual attempts on his boss' life by U.S. organizations.

This one technically isn't an operation of the CIA, but its predecessor, the Office of Strategic Services. After the Second World War, Nazi Germany had a large number of scientists with great wealth in knowledge, and we wanted this to ourselves. The main goal of Operation Paperclip was to gain that knowledge for ourselves and deny it to those of Britain and Soviet Russia.

Well, here's the thing - right after the war anyone living in Germany was labeled a Nazi, and Americans didn't want them here. Furthermore, most actually were Nazi's; some even had direct ties to the Gestappo and SS. Being that most Nazis were being hunted like a deer on opening day, surely the OSS couldn't bring them back here...

At this time the Joint Intelligence Objective Agency joined in and created fake political personas and employment records for the scientists and they were brought over anyway, despite President Truman's anti-Nazi directives.

The CIA worked with British Intelligence agencies in West Berlin in order to intercept Russian transmissions and phone calls in East Berlin, during the 1950’s. While most of the more conventional plans were failing, they received a tip about a very important communications line run 18 inches under a busy street just 200 meters from the Berlin Wall.

The plan was to build a tunnel 20 feet below street level. The CIA built a warehouse with a specially built and unconventionally deep basement for use as the staging area, and began work on the tunnel. This tunnel spanned 450 meters, or 1476 feet, then turned upward and allowed them to tap into the valuable communications line.

They did actually complete the tunnel, and the project was thought to be a major success. That is until the Soviets and the East German army "discovered" the tunnel in 1956. In the end it was learned that the Soviets had a mole within the CIA in West Germany, and had known of the tunnel since before construction had even been started. As a result most, if not all, of the information intercepted by the tunnel was misinformation intended to throw the CIA and British intelligence agencies off the trail.

Here's one that is much more recent. With the Global War on Terror in full swing and the invasion of Iraq quickly approaching in 2003, the CIA was searching for a way to turn the average Joe in the Middle East against not only Saddam Hussein but also Osama Bin Laden. They decided to make sex tapes with the above men engaged with young boys, and spread them via the internet to the Middle East audience.

Thankfully, the plan was swept under the rug after realizing what is considered taboo here, isn't always taboo in other cultures. In fact, homosexuality isn't taboo, nor is it taboo to sleep with someone much younger - as young as 13 at times - in Iraq or some other Middle Eastern countries. I remember during my time in Iraq an Iraqi Soldier once explained to me that in their culture women were for love and procreation, while men were for fun. Not quite what I expected to hear in a land where almost everything is driven by religion.

There was one tape that was actually made though. A video of Osama sitting around a campfire with some of his men, sipping on liquor and discussing his exploits with young boys. It almost seems the video was made as a joke rather than an attempt at defaming bin Laden.

The US and India weren't always the best of friends, in fact, during the cold war they often found themselves on opposing sides. Despite this, they’ve always cooperated with each other, and often worked together. One joint venture, however, resulted in the CIA losing a nuclear device in the Indian mountains.

In 1965 things were getting tense in Asia. China just completed its first nuclear test, China was becoming more hostile and Vietnam was starting to ramp up, also. The plan was to take a nuclear powered sensor to 25,000 feet on Nandi Devi, a mountain in northern India. This positioning was perfect for this sensor to track missile launches and other activity in China.

The problem came when storms moved in and oxygen levels were dropping. The team decided to tie the device down inside a crevice so they won't lose the device. The team themselves were airlifted out with plans to return later to finish the job.

When an Indian expedition returned to locate the device and finish the job, the sensor was gone. Signs of a landslide indicate that the device was swept away, and it still hasn't been found to this day. 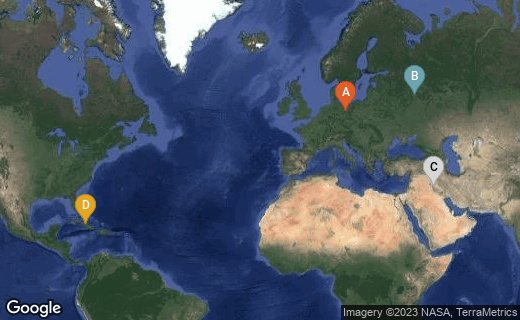