10 Interesting Facts to Know About Volcanoes 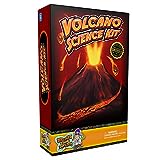 What do you know about volcanoes? Unless you live in an area like Hawaii that happens to be known for its volcanoes, you might not know a lot about them. However, people who have never had to think about volcanoes before are starting to take an interest in them lately since news of the Icelandic volcano has hit the headlines.

If you’re curious about volcanoes then you might be interested in these ten volcano facts and tidbits:

2.     Volcanoes float in water. Well, kind of. The volcanic rock pumice floats in water. In fact, it is the only rock that we know of that is capable of floating in water. It does this because of the way it forms which includes the formation of a bunch of bubbly air holes. The result is a lightweight rock that floats in water.

4.     Volcanoes grow and they also die. Volcanoes can grow in size. They are basically big mountains. When lava and ash accumulate, they can get taller. However, volcanoes can also die or become extinct. If a volcano has been around for a very very long time and it hasn’t erupted and it isn’t believed that it will erupt then it’s considered extinct. It’s more or less just a mountain at this point.

6.     You should head inside if you’re ever in an area where there is an eruption. The eruption from a volcano releases a lot of stuff into the air that isn’t very healthy for you to breathe. For that reason, it is recommended that people stay inside immediately following a volcanic eruption. They should take their pets inside with them to keep them safe. All doors and windows should be shut and fans should be turned off to prevent the unhealthy air from circulating.

7.     Volcanoes are named after a Roman god. The name “volcano” comes from the origin of the name Vulcan who was the Roman god of fire. Vulcan was the blacksmith of the Roman gods. He used fire to make weapons and tools for the other gods. The way that ash erupts from some volcanoes could be reminiscent of a blacksmith god at work.

8.     The loudest sound ever heard by man was the sound of a volcano exploding. It is believed that the loudest sound ever heard by a human being was the sound heard during the third explosion of a multiple-explosion eruption that happened in 1883. The Krakatoa volcano in Indonesia erupted multiple times over the course of several months. At one point it reached its pinnacle and exploded with enough force to be heard by people living over two thousand miles away! It reached 180 decibels which is enough to instantly make a nearby human being go deaf.

9.     A volcano erupting can be a good thing. Sometimes an ecosystem is unbalanced and the eruption of a volcano in the area can essentially provide a fresh start for life there. This is similar to the way that a fire can ultimately refresh an area even though it may initially cause devastation there.

10. Movies about volcanoes don’t seem to do well with critics. There have been several movies about volcanoes but none of them did well with critics. In 1997, Dante’s Peak and Volcano were both released and did well at the box office but didn’t receive very good reviews from critics. The first big movie starring Meg Ryan with Tom Hanks was a comedy about a volcano (Joe Versus the Volcano) which didn’t do nearly as well as Sleepless in Seattle or You’ve Got Mail, the two movies that the pair did together later.

There is a lot that can be learned about volcanoes. The way that they form, the different types that there are and the destruction that they can do are all fascinating topics worthy of further exploration. These ten tidbits are just the tip of the so-called iceberg when it comes to what there is to know about these wonders of the earth.