The Evil of Jeffrey Dahmer, not a dull life

Residents had been worried for some time about Apartment 213, Oxford Apartments, a 49-unit low-rise building on Milwaukee's crime-infested west side. When police entered the apartment in August, 1991, they found a freezer covered with Polaroid photographs of mutilated men.

Inside the freezer they discovered two severed heads and one more stashed in the refrigerator. A closet and filing cabinet yielded more human skulls and a kettle containing decomposing hands and two male organs. Various body parts were strewn around the apartment, as were bottles of acid and chemical preservatives.

The man who turned the apartment into a private abbatoir was an unassuming, pale, sandy haired 31 year old called Jeffrey Dahmer, who had been recently fired from his job in a Miwaukee chocolate factory. He told the police he had saved a human heart "to eat later." Dahmer's crimes became front page news in a horrified world and his name has become synonymous with Monster. This is his story.

Not a dull life

Jeffrey Lionel Dahmer was born on May 21, 1960 in Milwaukee, Wisconsin into a family of devout members of the Stone-Campbell denomination known as the "church of Christ" or "Churches of Christ." He was an active churchgoer until the age of five. At age eight, his family moved to Bath, Ohio, near Akron. He was always painfully shy and suffered from low self-esteem and at 8 years old he was sexually molested by a neighbor. First his father left the home. Then after a bitter divorce, his mother took his brother, and left Dahmer with his father. Dahmer's history of abandonment left him with feelings of loss and rejection. By the time he was a teenager he was an alchoholic loner.

After graduating from high school at age 17 he was left alone at home, without money, or food . It is believed by some that this experience, abandonment, and mental illness, gave him the justification he needed to commit crimes. However his own history shows that he had serious problems long before this age.

In 1978, aged 18, he committed his first murder. He killed a young hitchhiker, Stephen Hicks whom he invited home.

When Hicks tried to leave, Dahmer crushed his skull with a barbell, strangled him to death, then dismembered and buried his corpse because he "didn't want him to leave." That first slaying shocked Jeffrey back to a semblance of normality. He wouldn't kill again for another nine years.

Spiralling Out of Control

He took a brief shot at college, then at his father's urging,he signed up for a six-year term of military service, but the army discharged him after barely two years, fed up with his heavy drinking.

In 1982, Dahmer moved in with his grandmother in West Allis, where he lived for the next six years. In August of that year, he was arrested for exposing himself at a state fair. In September 1986, he was charged again with public exposure after two boys accused him of masturbating in public. This time he was sentenced to a year in prison, of which he served 10 months. In the summer of 1988 Dahmer's grandmother asked him to move out due to his late nights and foul smells from the basement. He then found an apartment on Milwaukee's West side. On September 25, 1988, he was arrested for sexually fondling a 13-year-old boy in Milwaukee, for which he served 10 months of a one year sentence in a work release camp. He was required to register as a sex offender. He convinced the judge that he needed therapy, and he was released with a five-year probation on good behavior.

While Dahmer was on probation he checked in every month as required. His corrections officer never visited his home. A Wisconsin Department of Corrections spokesperson said the requirement was waived due to a work overload. Shortly thereafter, he began a string of murders that would end with his arrest in 1991.

Dahmer said human flesh "tasted like beef." The remainder was boiled with chemicals and acids before being washed down the drains. By that time, Dahmer had conceived the bizarre notion of creating "zombies" who would be his live-in sex toys, obedient to his every whim. Instead of using voodoo, Jeffrey opted for a more direct approach. He conducted lobotomies on some of his victims, in an effort to destroy the subject's conscious will, pouring acid into a hole drilled in the victim's skull. Most died instantly, but some lived and functioned in a zombie state for several days, according to Dahmer.

In total Dahmer killed another 15 young men; by July 1991 he was claiming one victim a week. His fantasy was for a compliant sexual partner, and necrophilia. Most of Dahmer's all male victims were from racial minorities, usually African Americans. Dahmer was not really a racist, he chose predominantly black and other minority victims because he lived in a predominantly ethnic area.

On September 15, 1987, Steven Tuomi vanished in Milwaukee, the mystery unsolved until Dahmer confessed to his murder in 1991. James Doxtator was the next to die, in January 1988, followed by Richard Guerrero on March 24.

The next day, Dahmer lured a Laotian boy to his flat, fondled him, and offered cash for a nude modeling session. Police were called, and Dahmer was charged with sexual assault. Convicted in January 1989, he remained free pending a formal sentencing scheduled for May. Meanwhile, on March 25, Dahmer slaughtered victim Anthony Sears.

The death parade resumed with Edward Smith in June 1990. July's victim was Raymond Smith (no relation to Edward). Ernest Miller and David Thomas were butchered in September. Dahmer killed Curtis Straughter in February 1991. Errol Lindsey joined the list in April, followed by Anthony Hughes in May.

One almost got away. Konerak Sinthasomphone was reported missing from home on May 16, 1991, and was next seen the following day - naked, dazed, and bleeding from head wounds when neighbors reported his plight to Milwaukee police. Officers questioned Dahmer who described Konerak as his adult homosexual lover, and since Konerak spoke no English, they returned the youth to Dahmer's custody... and to immediate strangulation. Dahmer abused his body before dismembering it, keeping some parts to eat and his skull as a trophy. (When news of the police blunder broke, following Dahmer's arrest on murder charges, the two patrolmen were briefly suspended from duty, then reinstated when they threatened civil suits against the city.)

On July 22, 1991 Tracy Edwards managed to escape from Dahmer's apartment. With handcuffs still dangling from one wrist he flagged a squad car down and led police back to Dahmer's flat at the Oxford Apartments. Dahmer answered the door and explained that he had lost his job at a chocolate factory, got drunk and lost his temper but when he went to get the handcuff key to from his bedroom, a cop followed him in.

The stench of death and rotting flesh was overwhelming. The cop went into the kitchen and saw the refrigerator covered with Polaroids of mutilated men. He screamed when he opened the door. A human head sat on a refrigerator shelf.

Dahmer's fought back hard as they handcuffed him. Edwards recalled Dahmer's threats to "cut out your heart and eat it." Three more heads and human meat were in the freezer. Hands from several victims were in a stockpot in a closet. Two boiled skulls painted grey were on a bedroom closet shelf. Male genitalia were also found preserved in formaldehyde. A bottle of chloroform was found which had been used to drug the victims. There were hundreds of photos of victims before and during the murders, and after death. There was an altar of candles and human skulls in his closet.

Dahmer was unmasked to the world as one of America's most notorious serial killers. He gave police a 160-page confession detailing how he lured, murdered and then dismembered the remains of his victims. "It's hard for me to believe that a human being could have done what I've done, but I know that I did," Dahmer said in his confession.

In all, Dahmer admitted to killing 17 males.

By August 22, 1991, Dahmer had been charged with 15 counts of murder. At his trial, beginning on January 30, 1992, Dahmer filed a plea of guilty but insane. Two weeks later, on February 15, jurors found him sane and responsible for his actions. The court imposed 15 consecutive life sentences, thus requiring Dahmer to serve a minimum of 936 years. In May, 1992, a consecutive life sentence was added for the 1978 Hicks murder.

In prison, Dahmer refused offers of protective custody despite the many threats against his life. On July 3, 1994, another convict tried to slash his throat in the prison chapel, but Dahmer emerged from the incident with only minor scratches and refused to press charges. Five months later, on November 28, he was cleaning a bathroom adjacent to the prison gym when another member of the work detail, 25-year-old Christopher Scarver, grabbed an iron bar from a nearby exercise machine and smashed Dahmer's skull, killing him instantly. A second inmate, 37-year-old Jesse Anderson, was mortally wounded in the same attack, dying two days later. A racial motive was initially suspected in the murder since Scarver, like many of Dahmer's victims, was black, but a closer look determined that the killer was deranged, believing himself to be the "son of God," acting out his "father's" command. 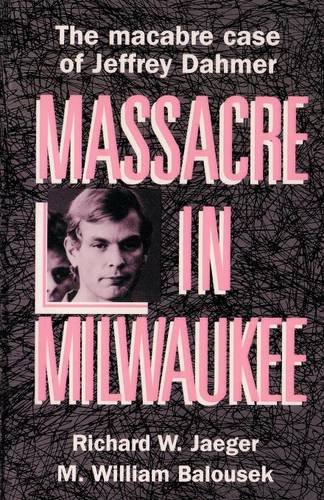