Americans- Display your FLAGS and show your PATRIOTism

The Grand old Flag, long may it wave

Go out there in your garage or go down to your basement and dig out that old bundle of flags you put away for storage last year.

Sort through them and then take the best ones in the group and plant then in your front yard. Or hang them outside your apartment window, or tape them in the rear window of your car.

Just let them be seen, on these special days when our country remembers!

It's just for a day or two and it really will not kill you to let the world know that you are a Proud American. Will it?

Take the time to honor those that have served their country and have given a part of their lives or maybe even their lives to make our country safer for us all.

Who am I Honoring?

You need to recognize that you are honoring something bigger and more important than just those who have died for their country.

Of course, those that made the ultimate sacrifice and died for their country are precious to us all, but by flying the American flag, on any day is you way of making a statement to the rest of the world.

You are also honoring those that were wounded and who lost limbs as well as those that have lifelong injuries from their wounds.

We should also keep in mind that you are also honoring those that served and came back alive and quietly resumed their lives and jobs without fanfare.

You are showing your support for the many sitting at home suffering with PTSD!

You are standing with those, whose wives or husbands who were left alone while their spouses went overseas to defend our country.

Also, you are thanking those who may not have been in the line of fire, but who worked on the Ships, and Tanks and Planes, and in the Hospitals around the world.

As well as those that operated the many other critical equipments and services that the men on the front lines needed to survive.

The Cooks, Technicians, Mechanics, Electricians, Radio Operators, Repairmen, Maintenance Men, and all of those who performed those necessary but not so glorious jobs to keep our other front line Servicemen safe.

You need to take the time to HONOR them ALL!

Its really not hard to honor your servicemen.

It's not a hard thing for you to do; Honoring your Servicemen!

And, I know, when I drive around on these special designated weekends, i will see many yards that are bare of these small symbols of respect and honor, the simple American flag of ours.

The interesting thing I see so often is that it's the poor and the working class who do not have much money that try the hardest to exhibit their patriotism.

Oh, some of the more well-off are also patriots, but for some reason that I can't understand, after many of these people settle into their comfortable lifestyles, the act of flying a few flags in their yards seems to be something that they no longer feel is necessary.

Does it embarrass them? Or, is it that they just don't have the time?

Who knows, but their beautiful well-manicured lawns are more often than not, bare of this simple symbol of patriotism, our American flag.

The great working masses, it seems, might not have a lot of flags, or often the ones that they have are a little faded or even torn, but ...... they know what is important to them.

The important thing to them is the fact that they live in a country where they have the freedom to fly a flag, of any kind.

The important thing to them is the fact that they are living in the home of their choice. It may not be a large mansion, but it is THEIR HOME!

The important thing to them is the fact they actually know or knew people that served their country, proudly, and often made the ultimate sacrifice for them and the rest of us.

The important thing to them is the fact that they sleep soundly at night knowing that others took up another flag, a battle flag, and stood on the ramparts waving it and telling our enemies:

THIS IS MY COUNTRY, AND I WILL DEFEND IT TO THE DEATH!

Yes, they know what is important in the long run, regardless of the state of the economy and regardless or which set of political fools are in charge of dragging our country down, regardless of the fact that they may be eating Hot Dogs at their Sunday picnic, this year, instead of Steaks.

Regardless of all of these things that should make them sad, on this weekend they will get together and enjoy each others company.

And maybe, just maybe, one of them will look over at the flags flying in each others yards and stop, think for a minute and mention someone that they know or knew who served their country.

Be a patriot! FLY your FLAG!

Respect, Remember and Honor our Servicemen

It is just a piece of cloth. But, when you display it, you're making a statement.

You are telling your fellow Americans that you Respect, Remember and Honor those who have sacrificed for you!

That's a pretty good use of your time, I think! 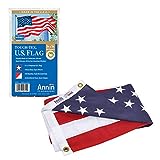 Annin Flagmakers Model 2710 American Flag Tough-Tex The Strongest, Longest Lasting, 3x5 ft, 100% Made in USA with Sewn Stripes, Embroidered Stars and Brass Grommets
I keep a couple of these flags in my RV. One if them is always displayed on my campsite. It is a good flag for the price.
Buy Now

A History of the American Flag