The Aboriginals of New Guinea and Small Islands Near Australia

The study of human migration examines far more than the steps and routes early peoples have taken in various journeys around the world from their lands of origin. This larger ongoing research in the Human Migration Program and the Human Genome Project traces migration through such factors as blood types followed through male ancestors and alternatively, through female ancestors.

The specific cultural makers for linking peoples are evident throughout Oceana and the South Pacific and they are numerous.

In addition to the long list of factors presented above, combined with unique factors used by various other disciplines of social and anthropological study, there are also the chronicled histories of groups of (Aboriginal) people living together.

These histories may take the form of rock paintings, cave paintings, wall murals on inner walls of the pyramids of Egypt, picture stories woven into fabrics and basketry with fibers, quills and beads; knots tied into length of fibers, tattoo and scarification patterns, written words, maps, diagrams, and drawings of constellations.

Atop all this are popular beliefs of non-Aboriginal peoples about global Indigenous Peoples, whether these notions are correct or incorrect. Popular notions are often mutated a bit with each iteration on the Internet, to a final result of being completely erroneous. Others are not completely not up-to-date with current facts. This all makes for a complex issue in terms of accurately tracking peoples and migration patterns.

All of the dozens of above combined factors hold the capacity to lead human beings into making connections between peoples that are not factual. One of the major sources of error in research is connecting and relating things that are not related.

It is a possibility that human beings appeared in different parts of the world independently, without migration. However, if this should prove true, then it would be an upset to some major religions and their creation beliefs.

My own view is that the Bible speaks in the Book of Genesis of Adam's sons marrying another people, in the land of Nod -- if Adam's family were the only humans, then who were the people of Nod? There are also questions about whether a certain people of Basque in Spain and another in one area of New Zealand are related to the rest of mankind.

There could be different humanoid species existing on Earth at the same time, if we do not want to consider the supernatural possibilities of spirit beings or even extraterrestrials. Whatever the truth reveals itself to be, it will be fascinating.

Despite evidence from different sources that state otherwise, the following seems the most widely held theory of Human Migration. It differs somewhat from theories and routes put forth by Australia's Monash University, including Joseph Birdsell's work and from some Indigenous oral traditions and likely from some material taught previously in schools.

One hopes that as new correct information is uncovered by the Human Migration Program, that this data will be quickly added.

The Path of Human Migration from Africa to Oceana

The Human Migration Program shows that human beings originated in Africa and moved steadily from West to East and to the North.

Per data in this project, Africans migrated from Africa between 90,000 - 40,000 years ago, according to this scheme:

These findings related to DNA evidence dispute the histories reporting that the man Kupe arrived in what is now New Zealand before anyone else, from Hawaii in 950 AD, followed much later by many Polynesians in 1350 AD to New Zealand and parts of New Guinea. If the DNA evidence is correct, then the stories of Kupe and the Polynesians are myths.

Before the Human Migration Program, evidence came to light that only the New Zealander Aboriginal women (descended from Africa and Southeast Asia) possessed DNA found in the other islands, and also that Melanesian men possessed DNA found in the same islands. Some NZ peoples and Islanders east/northeast of NZ were therefore already a mix of these women and the Melanesian men; that is, a mixture of African, Southeast Asian, and Melanesian.

There is also speculation and some evidence [Smithsonian Institution] that peoples from Oceana and migrated further on by boat, raft, canoe, or other sailing vessel to all along the coastline of California and went east and south, interbreeding, explaining some of the differences found between Native North Americans and Native Central/South Americans in the 21st century.

Corporate and agency partners in the Human Migration Program are 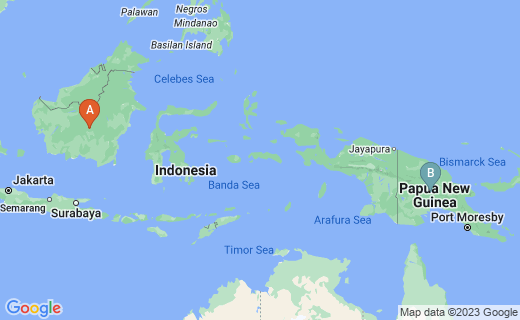 Genetic Markers M and B in Aboriginals and Native North Americans

A haplogroup is a specific related group of haplotypes, which are related genes (with some possible minor variation), all located at the same spot on a specific chromosome in descendants from a common ancestor. Peoples that share a Haplogroup are related genetically.

Both M and B Haplogroups represent the first peoples to migrate out of Africa, according to the Human Migration Program. Both groups are traced through the female line (mitrochondrial DNA or mtDNA)

M is also found in Central Asia, where it is possessed by 10-15% of people, indicating a population related to Aboriginals and Native North Americans. This creates a relationship between Central Asia and Aboriginals.

Haplogroup B (mitochondrial DNA) is also found in Aboriginals and in Indigenous Peoples from Canada all the way down to the tip of South America. Haplogroup B is found in all Native North, South, and Center Americans, but most strongly among those in North America.

Haplogroup B is found in 17% of Southeast Asians and 20% of Chinese, and to a somewhat lesser extent, in the Japanese and even among Siberians, who both are also related to Native Americans and First Nations.

In addition to Australia and New Zealand, Oceana is a continent of islands that contains at least 37 other countries.

This continent encompasses many of the islands in and around Australia and in the South Pacific. Although the name Oceana is no longer widely used as a continent's name, it is sometimes still seen.

Tasmania - The Legend of Darlie Yarlie

Cultures of New Guinea and Other Islands

Given the inter-relatedness of the Indigenous Peoples of Oceana and portions of Indonesia, the various groups likely developed languages, customs, beliefs, and practices that may be similar in some aspects.

The peoples are just as likely to contain elements influenced by other nations with whom they intermarried. These nations would include those of Southeast Asia, Melanesia, and others.