Abortion: Where Both Sides are Wrong

Health Care at What Cost?

While I don’t want the government to dictate the health care of those who can afford decent insurance on their own, I want health care for everyone in the United States. One reason not everyone agrees with the President’s current plan for socialized medicine is that it is said that it would force health care providers who are against abortion to perform abortions or refer them—making them go against their consciences or lose their jobs. The right to work, and thereby survive, in harmony with one’s conscience is precious.

Traditionally, abortion is not health care (I would say that it still isn't unless the mother's life is in danger). The Hippocratic Oath, which physicians long swore upon entering the profession, originally promised, “I will not give a woman a pessary to cause an abortion.” (Wikipedia, Hippocratic Oath) But today, in many portions of the United States, abortion is claimed as a choice that should be legal for all women and girls. The word “choice” riles up emotions on both sides. Even “life” becomes a word that is sneered at by some. Each side has its positive label. Should people have the choice to do anything they please? Should life be protected above all considerations? I say, both sides are ignoring the core issue, and I’ll tell you why.

In the Midst of It

As a Christian, I without question rode the pro-life bandwagon…until something happened to me that changed my perspective forever: During a time when illness rendered my sense of judgment void, I became pregnant with an unplanned child.

I say unplanned, not unwanted, for I was not by any means against the child growing within me. And I was certain that someone who was capable of raising my child could do so. But all the pretty pictures of adoption to solve the problem crumbled around me, plunging me and my child into a nightmare from which I have never fully recovered.

It seems that if you don’t fit the mold, the System is against you. Who is the System? Everyone, it sometimes seems.

When I saw that plus sign in the dish that announced my pregnancy, the health department worker asked, “How do you feel?”

I told her my feelings were mixed. I was happy about bringing a child into the world, but sad because I couldn’t possibly raise her. I was single, poor, and disabled. The baby’s father was—let’s just say, not father or husband material.

“What are you going to do?” was the second question.

“Put the baby up for an adoption.”

Then she told me that here in Oregon the father had the right to say whether the baby could be adopted out…even if he did not keep the baby himself.

Note that he had no right to say whether I got an abortion. Who made these laws this way, and why?

So I had to go and tell the father I was pregnant because of the week or two that I had had the affair with him, and that he had a say-so as to what would happen to the baby. His answer to the adoption question was a resounding no. He had it in his head somehow that an adoption was just as bad as an abortion, and that if I “turned his child out” I would be forfeiting his own soul. Then he promised that I would get over a thousand dollars a month in veteran’s benefits for the child, plus a portion of his social security. He then paraded me about town, introducing me to his biker friends and telling them he had gotten me pregnant. He was proud; I was deeply embarrassed and ashamed. It seemed he had gotten me pregnant on purpose so that he could brag about it.

It turned out the amount he had promised me in Veteran’s benefits was grossly exaggerated. I would never be able to afford a car.

I asked if he could help with some of my needs throughout the pregnancy. He said, “How about a shirt that says Harley Davidson on it?” Thus he would have branded me as his possession. I never asked for his help again duirng my pregancy.

I found a right-to-life office in town strictly by accident. When I asked my public health worker about it, she said she wasn’t allowed to tell me it existed.

The right-to-life people gave me a few pieces of old clothing and some pamphlets. It was there I first learned of open adoption, a practice built on the idea that an adopted child has two sets of parents, both who love the child very much. Open adoptions vary in level of contact between these parents and between the children and their birth parents, if any is arranged at all. I was excited at the prospect that my child would know that her original parents loved her and wanted what was best for her—a home they could not themselves provide.

My child’s father dug in his heels. Open adoption does not exist, he insisted. It’s all a lie. The only kind of adoption he believed existed was the closed one, in which the child cannot know who their birth parents are, whether they are alive or dead, whether they cared at all. Medical records, along with the baby’s original name, are all destroyed when the child is handed over to new parents in a traditional adoption. The prospect is not only heartless in the case of birth parents who do care (and I’m sure most do) but dangerous to the child’s health.

A number of agencies did open adoptions, but they all ignored me once they found out the father was contesting—although I was sure his rights could be annulled. You can’t get anything done legally regarding a child until it’s born. The wait was disastrous for my plans. The father harassed me with threats. He published an affidavit saying I was out of my mind and that he would be there “to snatch the baby out from between her legs.”

I don’t recall the right-to-life center offering any helpful counseling. I turned to myself as my only resource. I answered ads of couples seeking to adopt. They all seemed to want me to die as soon as I handed over my child. I hired a lawyer. I visited a Christian couple in another part of the state that I liked very much, but they changed their minds when the father sent a note saying he’d found out who they were. This couple said they respected the rights of fathers. What about the rights of mothers? Or children?

I was in constant pain due to a serious past hip injury, especially when I carried my heavy groceries up three flights of steps to my home. No one offered to help.

I became so depressed, I fantasized walking off one of the cliffs on the Oregon coast. I couldn’t imagine how anyone else in my position who did not have a relationship with Jesus could endure it.

I asked what was then called Children’s Services Division for help. They told me they did open adoptions, and promised to show me files of prospective parents. They never kept their word.

I sent out postcards to churches all over the state asking for help. Late in my pregnancy, in the winter, one responded. I knew little about this family, but because I was almost out of time, I agreed to spend a weekend with them.

At their house, I went into labor. The good news was it was miles away from the threatening father. The bad news, Children’s Services took my daughter away from me right out of the hospital. The court made them give her back to me two days later, but she remained legally a ward of the court—with strings attached that made taking care of her difficult.

The pregnancy was one kind of hell, the next three years another. I had not found the family I wanted to raise my child. I decided I would be the best bet under the circumstances. So I fought that court, and finally won.

We are the Exception?

On the cover of a major Christian magazine, I once saw the heading, “Tolerant? Should You Be?” It was illustrated with various labeled pictures, all of them but one naming some sin. The one label not a sin? “Unwed mothers.” The implication of the question was that Christians should not be tolerant to any sins, nor to unwed mothers. They don’t want us to have abortions, but they will hate us if don’t get them?

I wish I had complained to the magazine, but I’m sure they would have said it was a mistake. A mistake that shows far too much of the attitude of society toward those who have unexpected babies—one that encourages abortion, even through those who claim to be against it.

There is something deeply wrong with any country where killing your own children is considered a viable option. We are not chiefly talking about mean-spirited sorts, but about people who would love their children but who cannot afford to raise them, or who would receive so much persecution for the pregnancies themselves that they think abortion is the only choice. Some are so desperate that they would turn to “back alley” approaches if safer alternatives were not legally available.

You can’t speak up for children (of any age) in a vacuum. If you care about children, you have to care about parents, and potential parents. Simply making laws to establish rights for one or the other, or one verses the other, will not do. You have to make way for everyone.

Once I saw some protesters of the abortion issue on the TV screen. One woman held up a sign that read, “Let’s Talk.” I don’t know whose side she was on, and I don’t care. It was the best advice I’ve seen on the matter yet.

It’s been over 19 years since the birth of my daughter. We’ve scraped by living on the system, me working a little when I could, Social Security holding back part of my meager paychecks. My daughter graduated from high school, so she receives no more benefits. She can’t find a job, has no health insurance, and worries how to make her dreams come true. I’m pursuing my own dream, going back to college, and I pay most of the support for my daughter from money that is supposed to be just for me to get by on. This is not the future I envisioned for my child, nor for myself. I can only pray things will work out—that we don’t both or either of us end up on the streets and lose the good things we are so fond of.

What I’d like to see happen is an amended health care system that provides for all who need it and protects the conscience of those who believe that killing children is wrong. I want to see people who care enough not to have sex until they are ready to responsibly have children. I want to see rape and incest end. I want to see citizens who make a real effort to respect all people and care for them so that no one will see a need for abortion. Then it won’t matter what the law says, will it?

To help you through pregnancy 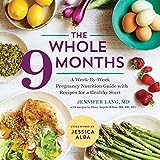 The Whole 9 Months: A Week-By-Week Pregnancy Nutrition Guide with Recipes for a Healthy Start
Buy Now