Alexis de Tocqueville was a young apprentice magistrate in France who was sent in 1831 by his government to the United States to study the prison system His interest went beyond that. He returned to France and publisher a classic analysis of the influence of Democracy on government, economy and society in the United States. I have always found is comments on America to be insightful.

I have collected a number of his quotations that appeal to me.

"The greatness of America lies not in being more enlightened than any other nation, but rather in ability to repair her faults."

Probably since Viet Nam I have heard complaints about all the faults America has, as if no other country has nay faults. Yes, the country, like any country, has its share of mistakes, bad judgment, and scandals, but we eventually get back on an even keel. In my personal opinion the last election is about changing some mistakes.

"When the past no longer illuminates the future, the spirit walks in darkness."

With political correctness and the tendency to write history to suit a political goal we are in danger of losing the past. We must learn from history.

I think in my lifetime we have seen enough results of socialist governments to know the truth of this.

"The health of a democratic society may be measured by the quality of functions performed by private citizens."

Simply put, we should have less government and more private and non-profit organizations.

"In the United states the majority undertakes to supply a multitude of ready made opinions for the use of individuals, who are thus relieved from the necessity of forming opinions of their own."

I am not sure if it is the majority in this day and age. Opinion forming has become an industry. People such as George Soros can spend millions on trying to mold our opinions. Likewise, I am not sure exactly what drives political correctness but it seems nothing short of mind control to me. It seems that those who should be leaders in informing us are bend on just giving us the point of view they want us to have. 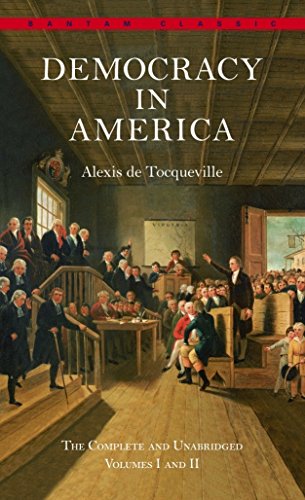 Democracy in America: The Complete and Unabridged Volumes I and II (Bantam Classics)
Buy Now

Those that despise people will never get the best out of others and themselves.

I think we see a lot of this now. For example, people in our government who act like they are superior to ordinary people and are not afraid to say so. Are the reason car companies and others went broke because they failed to supply products the people were willing to buy? In the old days the phrase was, “The customer is always right.” Is the customer treated that way now? Customer service is given lip service now but ignored in practice.

Despotism may govern without faith, but liberty cannot. How is it possible that society should escape destruction if the moral tie is not strengthened in proportion as the political tie is relaxed? And what can be done with a people who are their own masters if they are not submissive to the Deity?”

Depending on your own view of religion you may discount his opinion or agree with me that true liberty comes through believe in something higher. As our society gets more secular, it seems to me it gets more oppressive with groups and government infringing on us. For example political correctness, which is polite censorship. Attempts to regulate everything to the point of micro-management.

“The American Republic will endure, until politicians realize they can bribe the people with their own money.”

I think that in my lifetime this has been a trend. Earmarks, social programs that people vote for to get something for nothing, over and above the needs of a “safety net” which should probably be at the local level anyhow.

“Scarcely any political question arises in the United States that is not resolved, sooner or later, into a judicial question.”

A good example is: The lawsuit against the State of Arizona for wanting to enforce laws the federal government, for political reasons does not want to enforce.

“Though it is very important for man as an individual that his religion should be true, that is not the case for society. Society has nothing to fear or hope from another life; what is most important for it is not that all citizens profess the true religion but that they should profess religion.”

This is why the recognition of all churches, rather than a state church is feasible. If the populace has no religion it probably has no basis for moral and ethical decisions, thus leadin