Bubble gum and apple pie both are the essence of America. Yet, I purchased bubble gum made in China yesterday. Why? I don't know. I was unable to find any American made bubble gum. I will never return to that store. And I encourage you to learn and do the same thing.

Gum is an important commodity. It is the little things that make a lot of money. Look at the soap manufacturer who changed their business plan to go into gum - Wrigley.

Take a moment and look and demand gum made on our US soils.

5 Star Made in USA Company

4 Star Made in the USA

Incorporated in the USA, pays corporate taxes in the USA and manufactures overseas.

3 Star Made in the USA 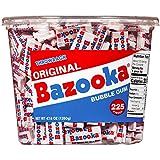 Originally operations were in Brooklyn, later in 1965 production was moved to Duryea, In 1994, the headquarters relocated to One Whitehall Street in lower Manhattan.

In 1987 a public offering and name change to The Topps Company, Inc. Wikipedia tells us they are incorporated in Delaware, headquarters remains in New York. Management remains in the hands of the Shorin family.

Topps is an international company with operations in Europe:

Topps has a European division, which is based in Milton Keynes, UK. From this office products are launched across Europe, including Spain, France, Germany, Norway, and Italy. This division also co-ordinates products launches across the numerous other international markets including the Far East, Australia, and South Africa.

In 1995, The Topps Company Inc. completed its take-over of Merlin Publishing. Merlin’s official company name changed to Topps Europe Limited, however some of its products still carried the Merlin brand as it was easily recognised by consumers.

Topps Europe Limited continues to produce a wide and varied range of sports and entertainment collectables across Europe. Its range of products now includes stickers, albums, cards and binders, magazines, stationery and even temporary tattoos!"

History of the Bazooka Bubble Gum

A marketing plan to increase the sales of bubble gum was created in 1950. Packaging gum with trading cards first began with a Western character Hopalong Cassidy (William Boyd). The first celebrity endorsement perhaps here in the United States? Or at least one of the very first. The backstory of the card and the father of the modern baseball card is provided below from wikipedia:

"The "father of the modern baseball card" was Sy Berger. In the autumn of 1951, Berger, then a 28-year-old veteran of World War II, designed the 1952 Topps baseball card set with Woody Gelman on the kitchen table of his apartment on Alabama Avenue in Brooklyn.[3] The card design included a player's name, photo, facsimile autograph, team name and logo on the front; and the player's height, weight, bats, throws, birthplace, birthday, stats, and a short biography on the back. The basic design is still in use today. Berger would work for Topps for 50 years (1947–97) and serve as a consultant for another five, becoming a well-known figure on the baseball scene, and the face of Topps to major league baseball players, whom he signed up annually and paid in merchandise, like refrigerators and carpeting.

The Shorins, in recognition of his negotiation abilities, sent Sy to London in 1964 to negotiate the rights for Topps to produce Beatles trading cards. Arriving without an appointment, Sy succeeded by speaking in Yiddish to Brian Epstein, the Beatles manager."

Bubble Gum Cars - Toys and an Adult Size Car too!

As a side note, while we are on the subject of bubble gum, here is a fun piece - check out the photo below - a car made to look like a blob of bubble gum!

And if you need a great gift for a kid - check out the Bubble Gum Racer. Just to keep a balanced approach the Bubble Gum Racer is most likely made in China. While I would love for it to be made here I now the tide is against that probably. I will simply stride to made tiny steps with new items such as bubble gum.

About the Bubble Gum Racer

Kid Galaxy My 1st RC Go Go Auto Bubble Gum Racer Kids on the go will love this miniature version of a real vehicle. It requires 3 "AA" batteries (not included) Controller requires 1 "9V" battery (not included) Operates on frequency of 49 MHz. Bubble Gum Racer is advertised as a soft and squishy RC car that can be used both indoors or outdoors. The remote controls include left and right controls lending itself to work on children's dexterity with 2 big buttons make the Race Car easy to maneuver for little hands!

"TV is chewing gum for the eyes."

"For some reason, chewing gum for me gets my brain going."

A simple request to check each store and ask why they do not carry American made bubble gum is a plea made by the author. I have no financial gain tied to this request - other than the jobs of my grandchildren. My children are both retired from the US Post Office. The gum doesn't have to be Topps but I feel the need to ask for more American products wherever we can. A job, your neighbor's job, your children's job, your grand children's job may depend upon it.

America - speak up - use your voice. It is your choice. We can change the future with simply a voice.

"This will never be a civilized country until we spend more money for books than we do for chewing gum."

As we express our gratitude, we must never forget that the highest appreciation is not to utter words, but to live by them.
John F. Kennedy

Change is the law of life. And those who look only to the past or present are certain to miss the future.
John F. Kennedy