LIKE PRESIDENT CLINTON BEFORE HIM, many think that absent the 22nd Amendment, President Obama may have run for a third term, for no other reason than to poke the GOP in the eye. He has unfinished, important business to complete and many think a vision that is good for America. Alexander Hamilton argued forcefully in Federalist Paper # 71 that he should have had a right to. The GOP in 1947 thought otherwise.

The 22nd Amendment was started in 1947 by the GOP Congress in reaction to FDR having won four terms and instituting policies they did not like; and finished in 1951 when enough States ratified it. It was designed to ensure that no person could ever be elected to more than two Presidential terms. Federalist Paper #71 makes it very clear that Alexander Hamilton (who favored a strong executive) would have fought hard to oppose ratification of this amendment because it would be harmful to the interests of a well-functioning government.

If You Are Serious About Politics - This is a Must Read 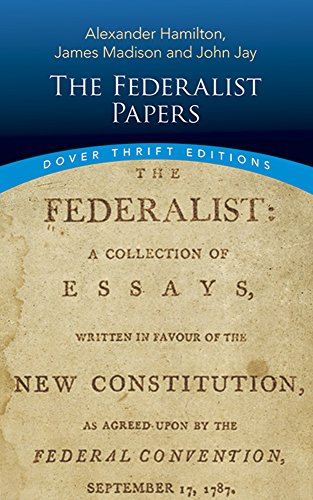 Duration of the Executive

IN A PREVIOUS PAPER, HAMILTON ALLUDES TO HIS BELIEF that it was expected a good Chief Magistrate might serve until the people decide they want someone new. The 22nd Amendment (1951) too that choice away from the People ... in other words the 22nd Amendment puts limits on their liberty to choose who governs them. In Federalist Paper #71, some 163 years earlier, Alexander Hamilton explains why this is NOT a very good idea. But in the heat of partisan politics, his reasoning was forgotten. Here Hamilton addresses two points; 1) why a four year term is a good compromise among other choices and 2) why there should be no limit on the number of terms a President may serve; consecutively or otherwise.

Hamilton begins by asserting that "duration" in office influences "the personal firmness1 of the executive magistrate, in the employment of his constitutional powers; and to the stability of te system of administration which may have been adopted under his auspices." He reasons that the shorter the duration in office, the less interest the office holder has in 1) doing a good job, 2) opposing corrupting influences, and 3) be willing to take more risks in carrying out his program, opposing Congress should they propose bad laws, and staying with unpopular, but nevertheless necessary actions.

Hamilton argues that one duty of the Executive is to protect, as much as possible, the people from being led astray by the wiles of partisans and emotion from the long-term goal of "the public happiness" and "Public Good". He attacks the notion that the "people always knows best" by noting that "But their (the people) good sense would despise the adulator who should pretend that they always REASON RIGHT about the MEANS of promoting it (the public good)." He follows this up with:

"When occasions present themselves, in which the interests of the people are at variance with their inclinations, it is the duty of the persons whom they have appointed to be the guardians of those interests, to withstand the temporary delusion, in order to give them time and opportunity for more cool and sedate reflection." (the emphasis is the authors)

Hamilton goes on to point out that EVEN IF he exhibits "unbounded complaisance in the Executive to the inclination of the people", it would be a grave mistake to make the same distinction with the legislature. Indeed, one of the main purposes of the Executive is to put a check on a sometimes overzealous and often partisan Congress. And if the President is not "firm" because of too short a term, then he can not fulfill that responsibility.

The idea of too Long a term was not really addressed because once the four-year term was established as reasonable, then any objection falls away because the People could then exercise their judgement has to his suitability to stay in office. But what about the four-year term? Why was this chosen?

Do you think that Alexander Hamilton was right to think it is counterproductive to good government to limit the President to two terms?

WHY NOT? WHAT IS WRONG WITH 2, 3, 5, or 6 YEARS. Hamilton next addresses this question. Part of the reason is concerned with the executive being able to check a too powerful legislature, especially the House, who has let partisanship to bad laws.

Clearly 1 or 2 years is unsuitable for two reasons. The first is that one or two years doesn't give the president time to establish his administration in a manner that will reflect his vision. The other is that short a time period allows Congress to simply out wait any executive action.

Three years, on the other hand, overcomes, to some degree, those two objections since his term extends beyond that of the House and 1/3 of the Senate. Six years or more, however, starts raising fears that if a president is prone to nefarious, self-serving intrigues, he might actually be able to achieve such designs.

Without actually being at the Constitutional Convention to hear their deliberations, I will leave this subject with the following quote from #71:

"As, on the other hand, a duration of four years will contribute to the firmness of the Executive in a sufficient degree to render it a very valuable ingredient in the composition [of government]; so, on the other, it is not enough to justify any alarm for the public liberty."

Rationale for No Term Limits

IN #72, HAMILTON NEXT TAKES UP WHY HE BELIEVES LIMITING A PRESIDENT to just one term is a bad thing. Rather than beat around the bush with paraphrasing let me give you his overall position on the subject.

"With a positive duration of considerable extent [the 4 years from #71], I connect the circumstance of re-eligibility. The first is necessary to five to the officer himself the inclination and the resolution to act his part well, and to the community time and leisure to observe the tendency of his measures, and thence so form an experimental estimate of their merits. The last is necessary to enable the people, when they see reason to approve of his conduct, to continue him in his station in order to prolong the utility of his talents and virtues, and to secure to the government the advantage of permanency in a wise system of administration."

Obviously, Hamilton sees benefit in retaining a President that is doing a good job. He then goes on to explore the problems with "exclusion", i.e. not permitting two or more terms.

He then spends the rest of this essay to point out how each of the arguments FOR exclusion is wrong. Hamilton begins by stating:

"Nothing appears more plausible at first sight, nor more ill-founded upon close inspection, than a scheme which in relation to the present point has had some respectable advocates - I mean that of continuing the chief magistrate in office for a certain time, and then excluding him from it, either for a limited period or forever after."

The first thing he notes is that "exclusion would be a diminution of the inducements of good behavior." His thinking is that a lame-duck President will care more about his vanity and legacy than he does of excelling at his job in the hopes of continuing it. He concludes this paragraph with "The most to be expected from the generality of men, in such a situation, is the negative merit of not doing harm, instead of the positive merit of doing good."

The next idea he has is that if an avaricious man knows he is term-limited and he enjoys the "emoluments" of his position then he might be persuaded to enrich himself as much as he can in the time he has left. On the other hand, even an avaricious man might tamp down his desires in favor of vanity and ambition if he perceives a chance to carry on his work. And if the People are aware of his unsteady character, they will not reelect him.

A third reason to allow continuation in office is that not to do so would be "the depriving the community of the advantage of the experience gained by the chief magistrate in the exercise of his office." This is also a powerful argument against term-limiting the legislature as well. In 2016 we are seeing the results of an excess of unprepared and inexperienced legislators in the House of Representatives. In their zealotry and immaturity, they are doing great harm to the effectiveness of government.

A subset of the last ill-effect is the case of national emergencies of state. Hamilton essentially asks if it is wise to switch horses in the middle of war. If one didn't know better, it isn't hard to believe that he as thinking about Franklin D. Roosevelt's third term in the middle of WW II. There is no telling the amount of harm that might have accrued had FDR not been allowed to run again. Yet, as in the cartoon above, people became very short-sighted and let the 22nd Amendment pass their legislatures.

The last thing Hamilton points out is that a term-limit will (and does) "operate as a constitutional interdiction of stability in the administration. It puts a straight-jacket on it in other words.

There are two important advantages to no term limits as well (as opposed to disadvantages). One is greater independence of the President from Congress and the other is greater security for the People. Both of these appear to be reflections on the ill-effects already presented. To the first point, when a President knows he MUST step aside, his actions are more constrained, and less advantageous to the good of the nation, than when there might be an opportunity to continue. As to the second advantage, if the President is doing an admirable, positive job for the country, then he would be able to continue it ... should the People so choose. With term limits, they cannot freely exercise their liberty to choose for themselves.