Many people in the developed world have overlooked the very real threat that an electromagnetic pulse attack (EMP attack) poses to modern societies. Unfortunately, it is not only ordinary people who are overlooking the threat posed by an EMP attack, it appears that many governments in the developed world have done little to prepare for an EMP attack, despite warnings from security experts that we should prepare for the potential for an EMP attack. An EMP attack could have far dire consequences than a nuclear bomb attack.

What Is an Electromagnetic Pulse (EMP) - An Explanation

An EMP causes an intense electromagnetic field to spread out from the origin of the EMP. The intense electromagnetic field rapidly induces very high voltages in electrical conductors as it spreads, which can cause extensive damage to an electrical grid and to electronic devices by causing damaging current and voltage surges to pass through and overload them, rendering them inoperable.

The worst case scenario for an EMP attack would be a nuclear weapon detonated approximately three hundred miles above the Earth's surface in the Earth's exosphere. An explosion at this height could spread an EMP over thousands of miles of the Earth’s surface beneath the explosion. If centered over North America, the EMP could affect the entire continental United States and large parts of Mexico and Canada (see the graphic to the right).

The exact effects of a high altitude explosion that causes an EMP are hard to predict, since many factors can affect the strength of an EMP and the effects it would have on the Earth’s surface. These factors include: the energy yield and altitude of the detonation, the gamma ray output of the detonation, interactions between the EMP and the Earth's magnetic field, and electromagnetic shielding of electric and electronic devices on the Earth’s surface.

An EMP attack would destroy unprotected electric and electronic infrastructure that modern societies in the developed world have grown to rely upon to run many functions in their economies and societies. Computers and any devices with embedded electronics in them, including automobiles and phones, could be destroyed and stop working. The electrical grid that modern societies depend upon to run vital infrastructure would collapse. In essence, modern societies in the developed world could be plunged back into the pre-electricity era of the 19th Century, with little hope for quick recovery since the damage to electric and electronic infrastructure from an EMP attack would likely be so extensive.

The consequences an EMP attack blackout would be much deeper than the inconveniences associated with losing electricity and electronic devices. The very existence of modern society could be put at risk, and personal security would be a major concern, as the widespread power and electronic device failures continued for years after the EMP attack.

Many unprotected electric or electronic device that citizens of developed world societies have come to rely upon and take for granted would be rendered useless by the EMP attack. Water purification and delivery to the home through underground pipes would cease to exist. Modern sanitation, such as indoor plumbing for waste water discharge would no longer be available. Hospitals would lose the electricity and the modern electronic medical devices that they rely upon to heal people and save lives. Food production would be reduced considerably, and transportation of food products would be very limited.

Modern life was we know it would be over for a number of years, until new electric infrastructure and electronics devices could be built. In the meantime, citizen of developed world societies would struggle to find the food and clean water that they need to survive and the heating products they need to keep their homes warm during the wintertime. Medical services would take a huge step backwards. Many millions could potentially die from starvation and disease before any sort of sustained recovery took hold.

An EMP Attack Could Be Devastating

The picture painted of an EMP attack on developed world societies is a very disturbing and grim one. Modern life as we know it would literally be over and many people would likely die before any semblance of modern methods of providing food, clean water, and medical care could be restored.

But there is hope, if we act now to mitigate the effects of an EMP attack. If electric systems and electronic devices are properly shielded against an EMP attack, the consequences of such an attack would be greatly diminished. Additional measures could be taken to prepare for recovery from such an attack, such as storing electrical and electronic equipment in shielded buildings for use after an attack in areas that sustain damage, and drawing up plans for rebuilding critical infrastructure after an EMP attack.

United States Representative Trent Franks (R-Arizona) introduced a bill to the United States Congress in 2010 called “The SHIELD Act” (H.R. 668) to protect the bulk-power system and electric infrastructure critical to the defense and well-being of the United States against natural and EMP threats and vulnerabilities. So far, The SHIELD Act has not been voted upon in Congress, but has been discussed in committee hearings.

The SHIELD Act would authorize the United States Federal Energy Regulatory Commission (FERC) to work with other government departments and agencies and private utilities to protect the United State’s electric grid from natural and man-made EMP threats, including an EMP attack.

Per the Official Summary, The SHIELD Act directs FERC to order the Electric Reliability Organization (ERO) to submit reliability standards to:

(1) protect the bulk-power system from a reasonably foreseeable geomagnetic storm event or EMP; and

(2) require entities that own or operate large transformers to ensure their adequate availability to restore promptly the reliable operation of the bulk-power system in the event of destruction or disability as a result of attack or a geomagnetic storm or EMP.

The SHIELD Act also directs the Secretary of Energy to establish a program to:

(1) develop technical expertise in the protection of electric energy systems against either geomagnetic storms or malicious acts using electronic communications or electromagnetic weapons; and

(2) share it with owners, operators, or users of systems for the generation, transmission, or distribution of electric energy located in the United States and with state commissions.

Since either a natural EMP from a geomagnetic storm or a man-made EMP from a nuclear bomb have the potential to wipe out the electrical infrastructure of modern developed world societies with dire consequences, this venerability needs to be addressed on a national security basis. The cost of protecting electric systems and electronic devices from an EMP is not terribly great in the grand scheme of things, when put in the context of how much is spent on “national defense” each year to address other less pressing security threats, some of which are quiet dubious in nature.

For those interested in learning more about the potential consequences of an EMP attack, a novel by historian William R. Forstchen called “One Second After“, which is based on research done by Mr. Forstchen regarding the aftermath of an EMP attack, is a sobering vision of what developed world societies may face if they suffer an EMP attack.

Share your thoughts about the threat posed by an electromagnetic pulse attack (EMP attack) in the comments section below.

Buy One Second After From Amazon 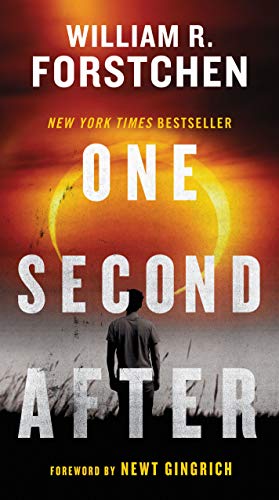 One Second After (A John Matherson Novel, 1)
Buy Now

EMP Attack Interview With Bill Forstchens, Author of One Second After