Animals should not be used for medical experimentation

There has been much controversy about using animals in experiments for decades. People converse over different alternatives for animal testing and the inhumane way scientists treat these animals in experiments. This topic causes so much controversy because there are ethical issues to consider such as the treatment of the animals and the reasoning behind testing on these animals if it’s for a greater cause or not. As of now, I am for animal testing for many beneficial reasons that come out of animal testing. Although in some cases animals maybe abused, there have been so many discoveries with medicine with testing these drugs on animals.

Until we find a better way of testing drugs I believe animal testing is ethical. The research that has been gathered from animals has surpassed anything scientists could hope for. So why would such a highly debatable topic arise from such great accomplishments? Scientists use animals to test a theory and then alter their theories based upon the valuable information gathered from each experiment. Animal rights activists believe that animals are used for pointless tests and suffer tremendously (Beckoff, M. & Meaney, C. A, 1998). They tend to look aside from the facts that animals have given millions around the world a new outlook on life, and would rather see only the negative side effects of animal testing which far outweighs the positive things animal testing has contributed to the medical world. They don’t realize that the animals they believe are being harmed, have not only impacted their lives in some way, but have impacted their families, friends, and children by providing people with vaccines and antibiotics which are deserving of more accreditation than what they label them.

Millions of lives are saved every year because of one animal’s, results to either a drug or new form of surgery, and I believe instead of believing that an animal’s life was a waste; I view it instead as the next step in bettering people’s lives for hundreds of years to come. Animal testing is the most predominant forms of testing used by scientists; the results they yield bring a new outlook on life for millions around the world.

Animal testing should be outlawed because it is hurtful and not necessary. Do animals feel the same pain that we as humans feel? How do we know that other humans feel pain? We know that we ourselves can feel pain. We know this from direct experience of having your finger slammed in a drawer, or stubbing your toe on a chair.

It is said that pain is a mental event; something that can not be observed. Pain is something that is felt, and we can only assume that other humans feel pain from external indications such as our own like crying, screaming, or jerking away from something. If we can justify that other humans feel pain, why is it said that animals do not feel pain? When an animal is poked, burned, or stepped on; they will cry, yelp, or jerk away. Since the external indicators are the same, we can assume that animals feel the same pain that we as humans feel. Animal protection advocates stress that the main disadvantage of animal testing is the inhumane treatment of animals in tests due to the fact that anesthesia for the help of pain is often not used. Scientists say that using anesthesia will interfere with test results.

Tests that are performed on animals range from them being forced to ingest different household cleaning products and then monitored to see the results and new cosmetics placed on their skin to find out if there are any side effects that would be harmful to a human. There are even some practices where animals are forced to ingest a medicine before it is put on the market to make sure that there are no life- threatening illnesses that will be caused to a human from taking the product. In order to test corrosive chemicals like Savage Acid and Goodbye Graffiti, rabbits backs are shaved and corrosive chemicals are applied onto their raw skin and left for up to two weeks. The chemicals burn the skin and the rabbits are given no pain relief. After the testing period the rabbits used are then killed.

Today the term “vivisection” is used. Vivisection is defined as “cutting while still alive” but it is more commonly used today as any harmful experiment or test that is performed on an animal. Animal experimentation involves the incarceration of animals and poisoning, mutilation, disease and killing of those individuals. It is arguably the most brutal and most severe form of violence in the modern world.

The U.S. Environmental Protection Agency requires by law that pesticides be tested on dogs, which are shoved into "inhalation chambers" where they try in vain to escape the deadly poisons that are pumped in. The Food and Drug Administration requires companies marketing fluoride products to swab the teeth of 200 rats with the test substance for two weeks, at which time the animals are killed and their heads baked in an oven for an hour and your tax dollars are funding these types of experiments. Some businesses that test on animals include: Clorox, Clairol, Calvin Klein Cosmetics, Cover Girl, Dial Corporation, Johnson & Johnson, and Playtex Products Incorporated. 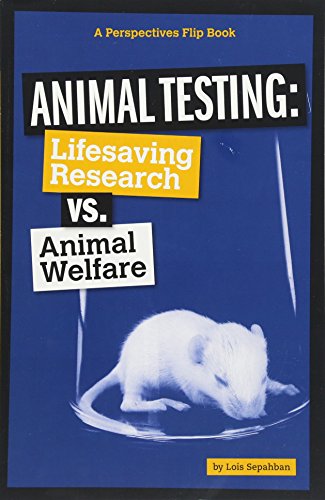 It is said that an estimated 50,000 animals die due to the testing on them that Proctor and Gamble performs on them every year. “Secretly-filmed video evidence of P&G sponsored experiments at Huntingdon Life Sciences (a major multi-national contract animal testing company) shows the brutal treatment and killing of 48 monkeys.” (Murray-West, R, 2005) One other business that performed testing on animals was IAMS. I know, you wouldn’t think that a company that made food for your pet to keep them healthy would test on animals much like your pets. Some of the tests that IAMS performed were:

Since cosmetics and household items are not required to be tested on animals and since there are non-animal alternatives, it is difficult to understand why companies continue to conduct these cruel tests on animals. The two main reasons that all companies do not become cruelty free are: the fear for human safety and the fear of product liability suits.

Founded in 1981 was Johns Hopkins Center for Alternatives to Animal Testing (CAAT), a place that is dedicated to helping find new methods to replace the laboratory animals that is being tested on. The CAAT vision states: “To be a leading force in the development and use of reduction, refinement, and replacement alternatives in research, testing, and education to protect and enhance the health of the public.” (CAAT)

The main disadvantages to animal tests, according to John Frazier and Alan Goldberg, of CAAT, are: "Animal discomfort and death, species-extrapolation problems, and excessive time and expense." (CAAT) Revlon Cosmetics was one of the first large companies to fund the research for alternative testing with a contribution of $750,000 to the Rockefeller University in 1979. Keep in mind that, while companies search for alternatives, animal use actually INCREASES because the old test (using animals) must be done alongside the new test (without animals) to ensure consistent results.

So what types of alternatives are being used today? The most common alternatives that are used today are: in-vitro tests, computer software, and even human “clinical tests”. The use of animal cells, organs, and tissue cultures are also deemed as alternatives, however animal lives are still sacrificed for the use of their parts.

How can someone that kills a dog in the middle of a street in broad daylight have repercussions to abide by but the companies that slowly kill animals with the tests that they perform on them not have any repercussions to pay? There are laws in place for the safety of animals that are on our streets or that live with us as companions, but there are no laws that say it is wrong for businesses to slice a dog open while it is still alive with no anesthesia just to take tests of its kidney.

The animals can not tell the scientist that they don’t want to be tested on, but humans can. We need to talk for the animals and help stop this cruel and inhumane treatment. There are many other ways that products and medicine can be tested; the use of innocent animals is no longer needed.

So, the next time you pick up a product at the store; look at the fine print before you take it to the register to pay. Make sure that the products you use don’t support the inhumane killing of an innocent animal. The animal that is being killed for a shampoo that you are buying could be someone’s companion.